“Girl power” could be the title of this ladies-only trip to Trentino: our g... 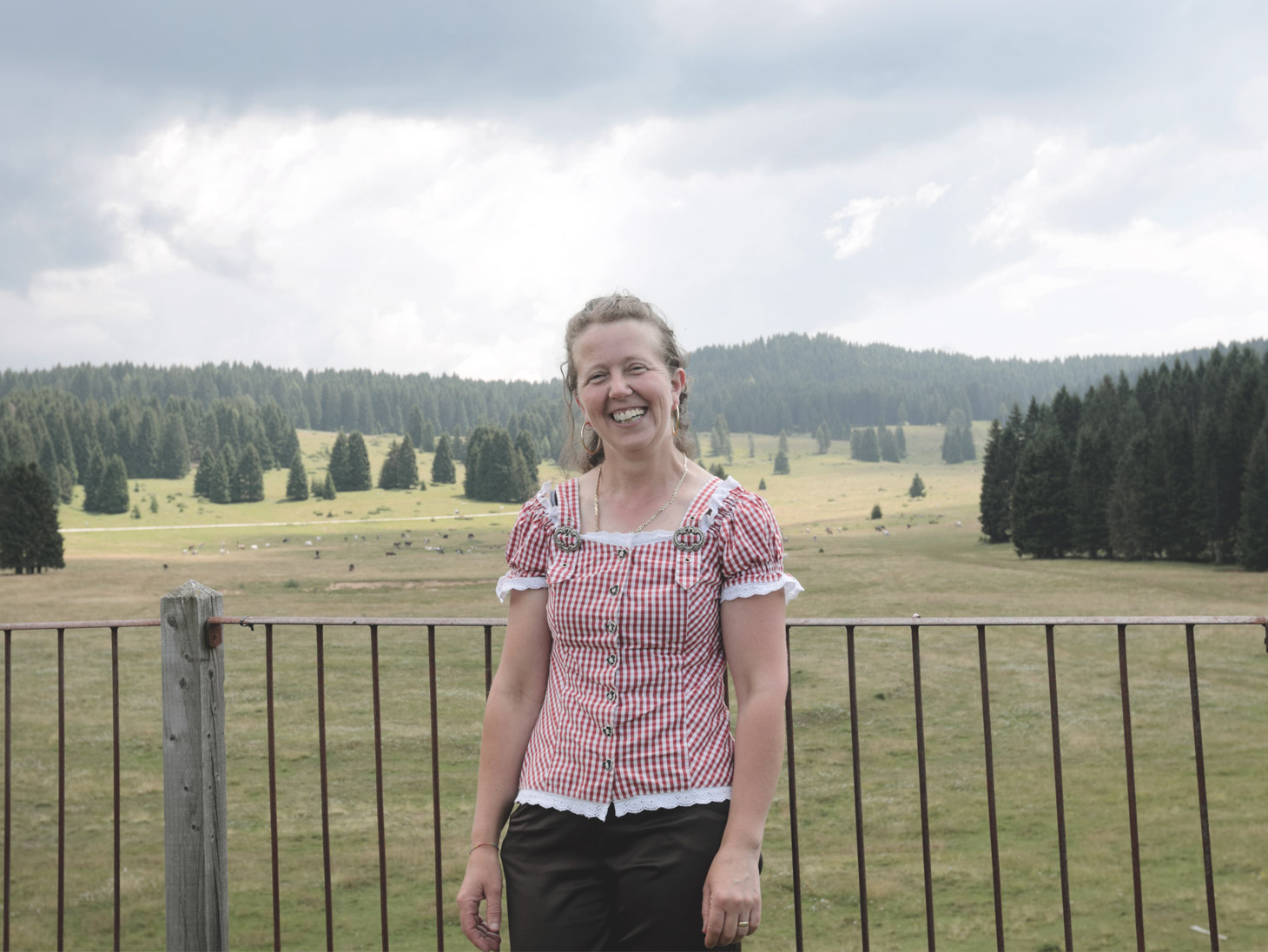 “Girl power” could be the title of this ladies-only trip to Trentino: our group consisting of the quality director (Giorgia), purchaser (Elisabetta), marketing director (the undersigned) and the ever-present photographer (Beatrice), all headed to Passo del Vezzena in order to meet a “warrior”, Marisa Corradi, who has been the dairy’s president since 2009.

With the unmistakable female talent for the sense of direction, “we chose” the most tortuous road to get to our destination and didn’t even think to look at the sat nav map first! We therefore found ourselves heading up a very narrow road overlooking Lake Caldonazzo, with tunnels that had been dug through the rock itself. I was terrified but we started to laugh to lighten the mood. The view on the other hand was breathtaking!

Thanks to our prowess (or naivety), we immediately gained the trust of the company president and all the dairy’s persons. Giorgio Gosetti, the sales manager, informed us that the old Menador ascent, also known as the Kayserjägerweg road, is an old Austrian road that was used by the armed forces during the 1915-1918 war. He told us that most local people avoid it as it is dangerous. For the record, we also did the same route by mistake on the way back.

Giorgio started off our tour of the dairy: Folgaria, Lavarone, and Luserna are located on Alpe Cimbra. From around 1500, emigrant Bavarian farmers settled in these municipalities, and they still constitute a German-speaking ethnic minority, known as the Cimbri. The Caseificio degli Altipiani e del Vezzena (Casello TN 4210) has a long history too: it was founded over 150 years ago in 1864.

Today the dairy has 10 employees, including a guy from Mali and another from Nigeria, who have both worked there for two years now. Two immigrants, who did not know any Italian when they arrived. They were hired as apprentices and enrolled on a public library course to learn Italian. They now play for the village’s football team and have found both a job and house in Lavarone.

Currently the dairy processes 40-50 quintals of milk per day. The milk is collected from 13 members, who rear an average of 30-50 head of cattle, most of which are Bruna italiana or Pezzata Rossa breeds. Some of these farmers still have a few Rendena or Pezzata Nera cattle: the “Blacks” remain stamped on your heart, tells us Marisa, who had caught up with us in the meantime. She comes from a farmer family herself.

And it is precisely breeding, feeding the “girls” as she calls them, the real starting point for producing a good cheese. In summer, the cattle mainly eat grass and in winter, they only eat the hay collected during the local area’s first and second harvests. Their only supplements are non-GMO cereals (in practice, they have the same diet as the one required in the regulation of Parmigiano Reggiano PDO).

In order to encourage the breeders to pay special attention to the diet, hygiene and care of the animals, the farmers are paid for their milk according to the quality. This is defined in terms of the amount of fat and k-casein (it used to be the total amount of protein), the absence of somatic cells and a low bacterial load. “The goal is to improve the welfare and longevity of the animals: our cows produce milk for 12-13 years and then towards the “end of their lives”, they are taken to the slaughterhouse” - she tells us with her eyes shining. It is not only an economic goal, the link with the land and animals can be clearly perceived. 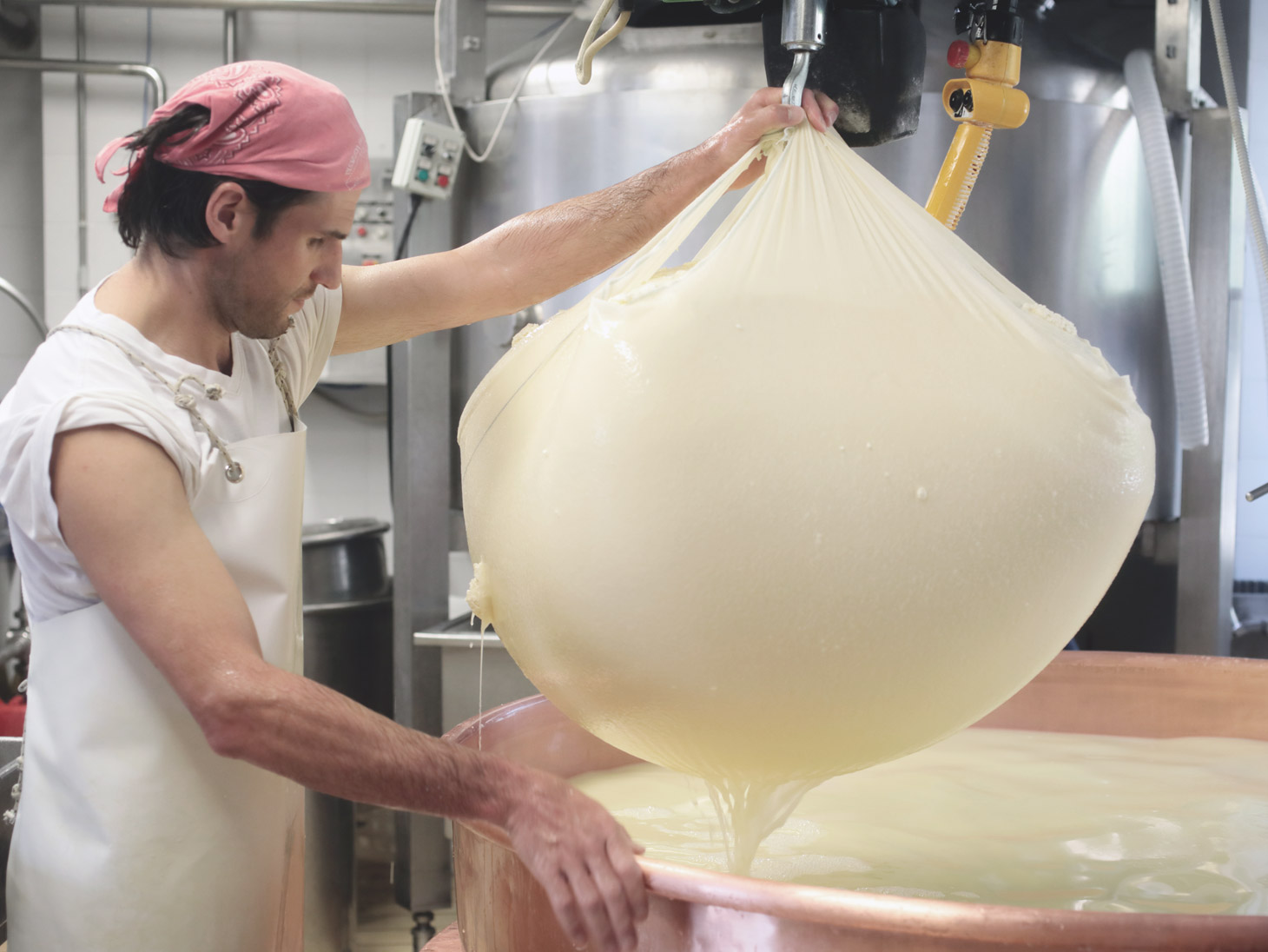 We next entered the heart of the dairy, the realm of Ivan, the cheesemaker. Ivan’s expertise is intertwined with Marisa’s ones: they both started at the dairy at around the same time (Marisa in 2009 and Ivan in 2010). Together they manage the restoration work, by revamping the areas one at a time: they started with the production areas, then the maturing room and finally the shop. It is a story with many ups and downs, just like all stories. A few years ago, Ivan left the dairy but he later returned. It is clear to see that their relationship is based on mutual respect.

We were able to watch a part of the Vezzena production.

The milk is collected from the alpine pastures surrounding the dairy: Passo Vezzena, Folgaria, and Luserna. It is then brought to the dairy. The partially-skimmed milk from the evening milking session is combined with the milk from the morning session. “Butter used to be three times more valuable than cheese, and for this reason the milk was skimmed,” explained Giorgio. “We work exclusively with raw milk and do not use any starter cultures. This is the only way to protect the cheese’s identity and its link with the area and our dairy.” The milk is heated slowly and then milk-culture is added. When the temperature reaches between 33-35°C, the rennet is added: the mixture takes 20-25 minutes to curdle. A curd cutter is then used to break the curd into corn kernel-sized pieces. These are then cooked slowly at 45-48°C and the mass is left to settle on the bottom. The curd is extracted in a single block (approximately 120 kg of curd is obtained from a vat containing 1,200 litres of milk), which is then cut into ideal portions to obtain a wheel. The blocks are placed in moulds and then pressed. The cheese is then brined and finally aged on spruce boards. Furthermore, they are cleaned and treated with linseed oil once a month. 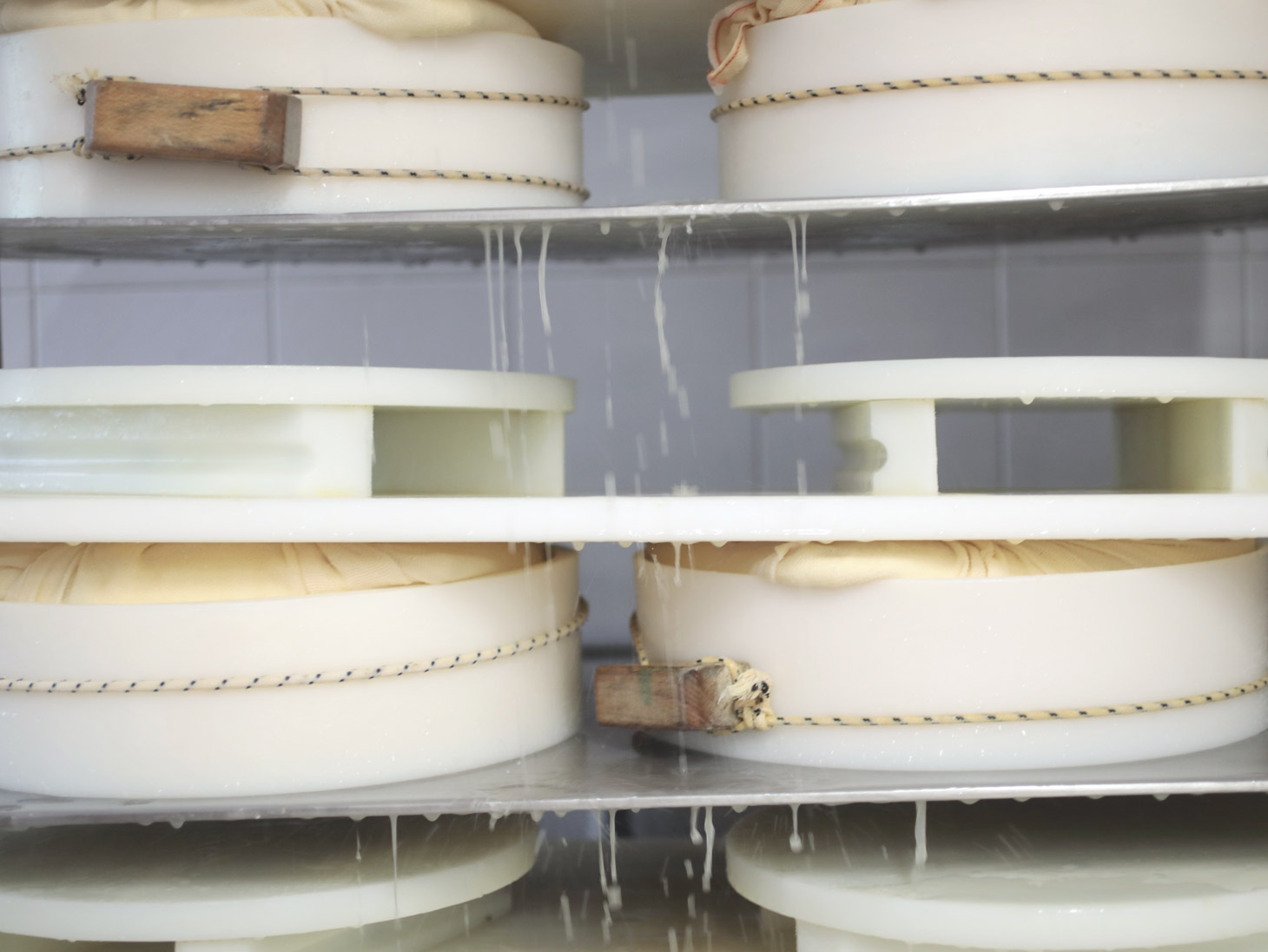 Our tour then proceeded to the maturing room, where the cheeses are aged for the first few months before being transferred to a maturing warehouse in Ponte Maso; they remain in this warehouse until they have been aged for 12 months. However, we later discovered that some Vezzena Stravecchio cheeses are stored in the President’s “caveau”, and these can be aged for up to 4 years.

We then left the dairy to visit the “Soto al Croz” Farm, owned by Marisa’s family. Beautiful bales of hay in the shapes of animals and characters were displayed along the road, all the way up to the cowshed. The smell in the barn was crazy! The hay is stored here for winter and the humidity is controlled as it must not exceed 10%, in order to guarantee the quality and protect the cows’ health. The cowshed itself was also very nice. There was even a brush that the cows could use to have a scratch. But above all, the fact that there was no overwhelming smell, confirms that no silage is used.

“Hay production is at the heart of it all; it must be clean and clostridia-free. We must not forget that “milk is the son of a cow”: all it takes is a storm or a type of hay that the cows do not like in order for them to produce less milk. The “girls” are very sensitive. Here, the farmers prefer to rear cows, instead of buying them,” Marisa told us with pride, “and to remain at Soto Al Croz, these cattle need to be born female.” No doubts about it! 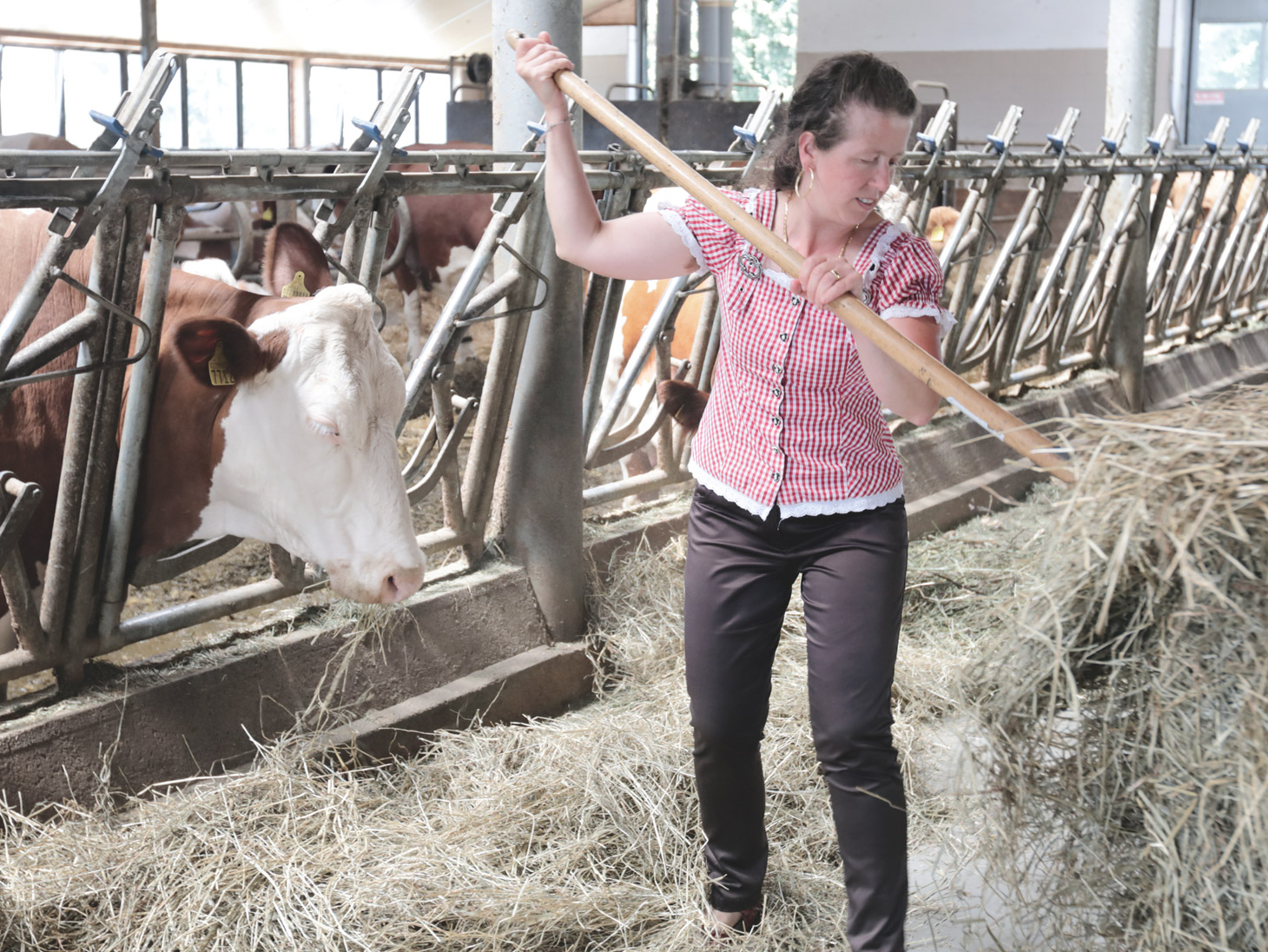 We then had lunch on the Vezzena Plain, really a spectacular view. We left the car in the square, where it was monitored by Lucy, a cow that enjoys walking through the car park. Our last stop was a visit to the Millegrobbe Di Sopra Alpine Pasture at Lavarone: 160 hectares of pasture at 1,400 metres above sea level. We were shown around by Gino, the breeder, who until 10 years ago, was also a cheesemaker and directly produced cheese in the alpine pasture. Today however, all of the milk is sent to the Caseificio degli Altipiani e del Vezzena. “We have approximately 100 lactating cows in the alpine pasture, most of which are Pezzata Nera. It is too much work for one person, especially when one is starting to feel his age...” The cows live outdoors at all times, in a vast area with no fences. They enter the cowshed of their own accord, and only for milking. Furthermore, those who arrive late, do not get milked during that session.

We all returned to the office thinking of the quote by William Blake: “Great things are done when men and mountains meet.”