We are taking important step in the world of pasta, together with Borgoluce a...

We are taking important step in the world of pasta, together with Borgoluce as a travel companion
⏱ 4 MINUTES READING

THE PROJECT
As we had announced, here we are with a new project in the field of dried pasta.

Also this time we decided to carry it forward with a partner with whom we have been working for a long time: Borgoluce.

It is a pilot project, almost a market test, which will have a strong seasonal component and limited numbers, and which will allow us to understand what planting instructions to give to the farm for the 2022 harvesting campaign.

In an era of "unlimited" availability and "food waste" we think we must find the courage to do our best with what we have available and we will have just over 1000 kg of pasta.

This is a new program: Borgoluce has just two years of planting oriented to the production of pasta. We are talking specifically about Farro Dicoccum (emmer wheat) and Senatore Cappelli durum wheat, and the quantities are still limited just as the hectares dedicated to these grains were limited.

It is certainly an ambitious project, first of all because the cereal crops take place in a biodynamic regime and secondly because the pasta is produced by Marco Bigolin of the Terre Vive Mill in Rossano Veneto (VI), with a careful eye and without leaving anything to chance, exclusively with Borgoluce raw material. 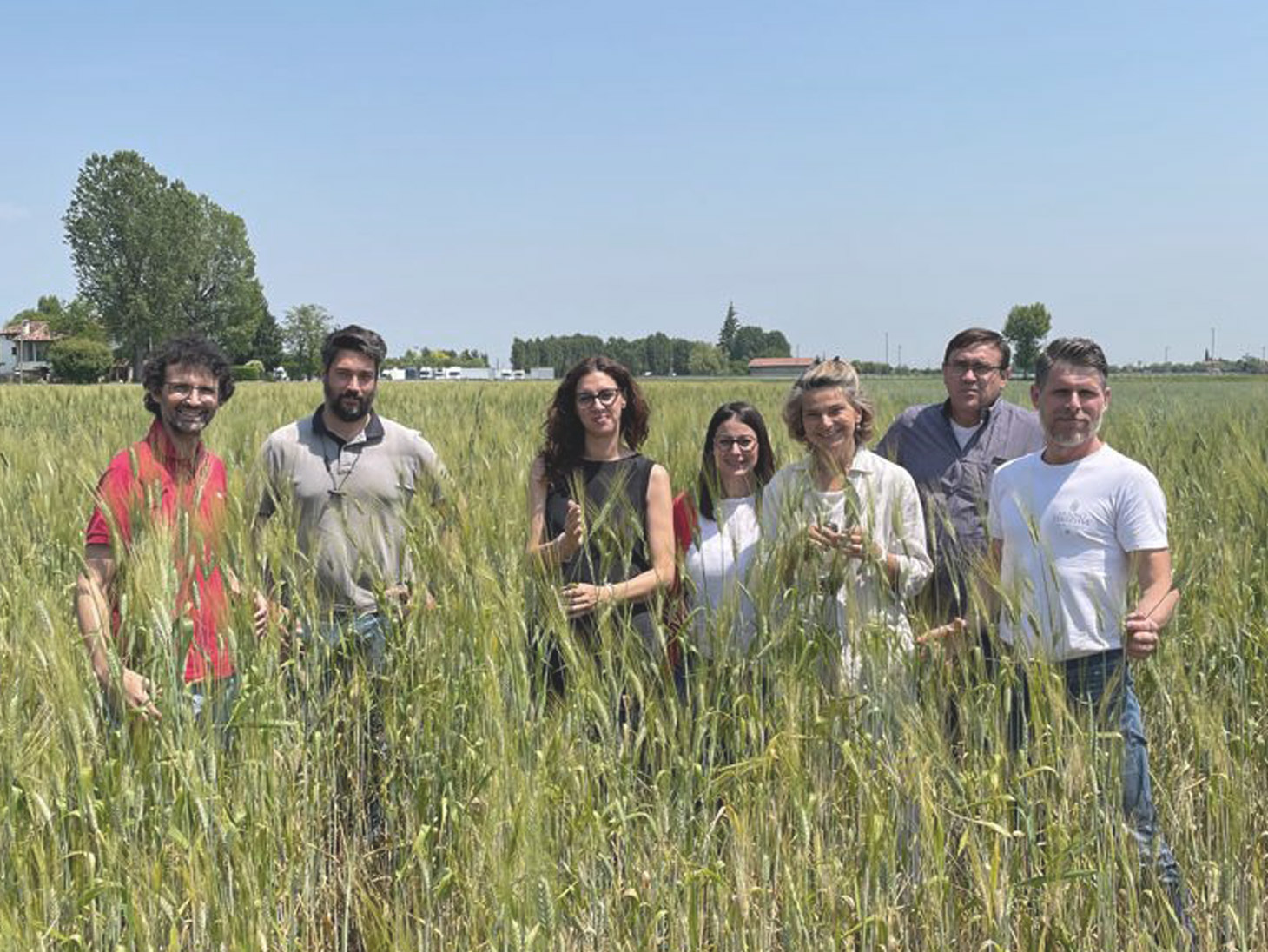 THE CEREALS
Maybe I jumped in too fast... So let's look back at the production chain and start from the field.

Borgoluce devoted to arable crops, in 2021, about 15 hectares of land surrounding the headquarters of Susegana (TV); among these the Senatore Cappelli durum wheat, the Farro Dicoccum and the Mais Biancoperla were grown.

The principles of cultivation are based on the biodynamic regime, in other words "organic that thinks more about the future", that cultivates not only the plant, but also the biological fertility of the soil.

The conversion to biodynamics is not new for Borgoluce, but is already a reality also for the viticulture part that created a couple of organic wines.

But let's go back to the grains: Farro and Durum Wheat are autumn-winter cereals with a long growing cycle. This means that it is sown in autumn and the seed starts to germinate, then in the cold season it goes into dormancy and when spring awakens it pushes back (it again produces shoots) and forms tufts (makes a tuft of stems), thus requiring a low investment in seed (about 120 kg of seed / ha). 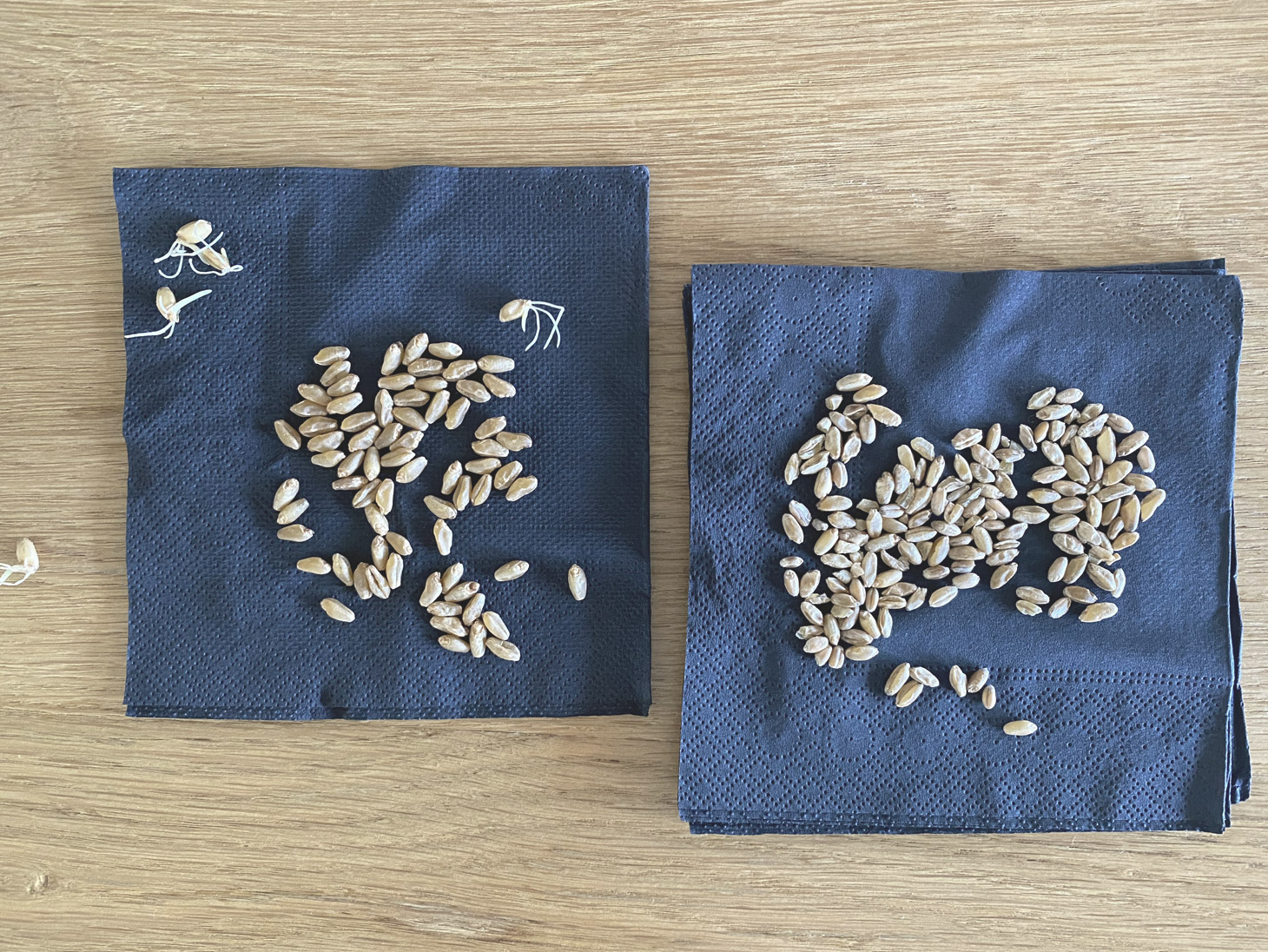 SENATORE CAPPELLI
Senatore Cappelli is characterized by a stem which can grow even 180 cm high, a compact ear with a characteristic and unique black moustache that makes it recognizable in the field even by non-experts.

It was the most widespread wheat variety in Italy in the first half of the twentieth century, and represented the alternative to the less productive "ancient grains". Then the economic boom of the second post-war period, the arrival of fertilizers and the demand for higher and earlier yields supplanted their use.

It is only in the last 15 years that this variety has regained its value, valuable both for a gluten content, lower than other grains (and therefore greater digestibility), and for the aromatic quality that it transfers to the finished product as well as for the high antioxidant content, mainly flavonoids. 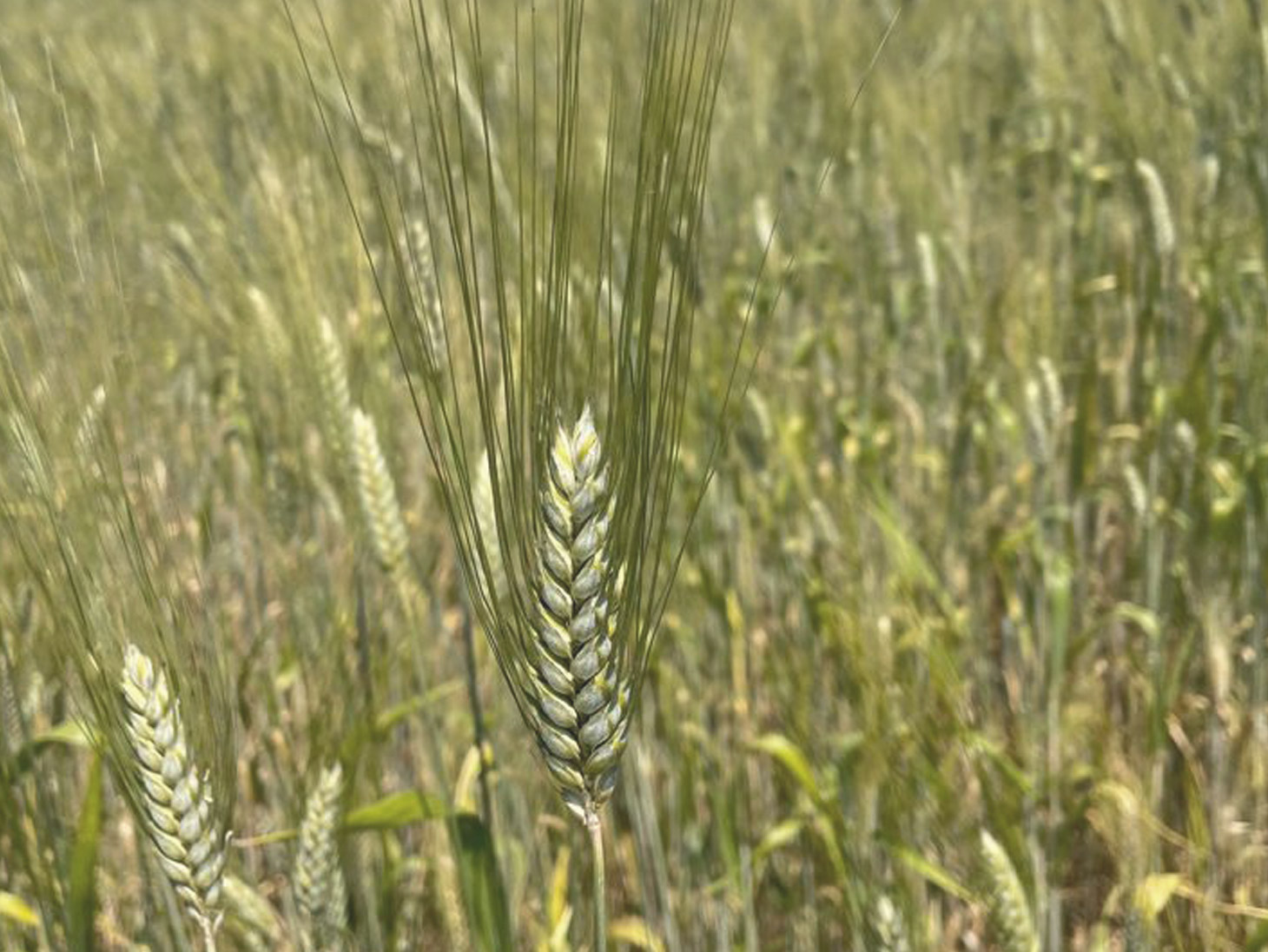 FARRO DICOCCUM
Farro Dicoccum still belongs to the family of wheat, it has a lower gluten content than durum wheat, but greater quantity of mineral salts. It is a rather rustic plant, resistant and of very ancient origin. The nutritional values of farro are comparable to those of durum wheat but, compared to it, farro is more digestible and has a lower glycaemic index. These are the reasons that have made it very attractive to consumers in the 2000s. 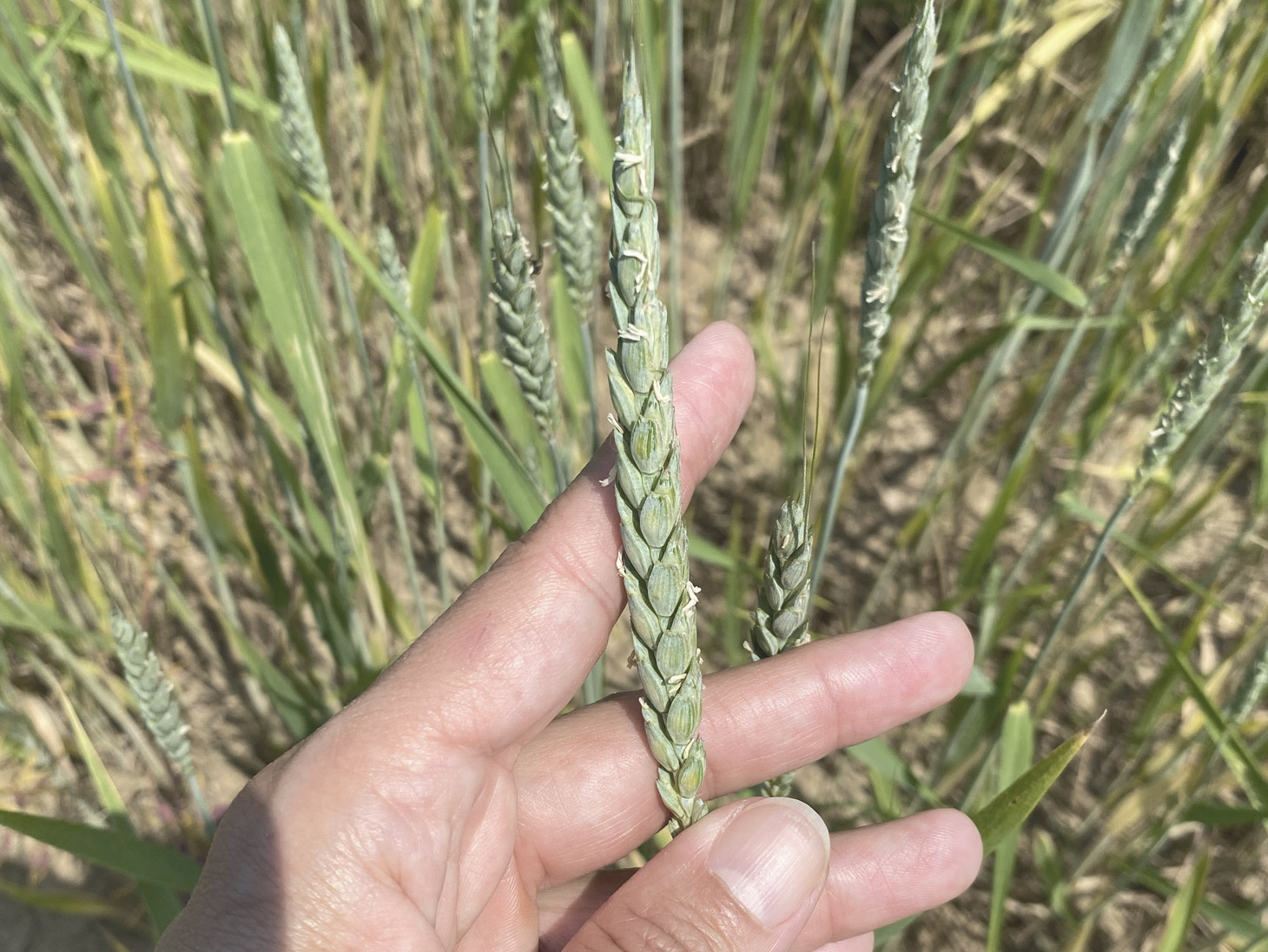 CHAIN... STEP BY STEP
Borgoluce decided to invest gradually in these two varieties by creating a line of dried pasta, produced exclusively with the harvest from their fields, and it is this attention to the production chain that interests us and we want to continue to enhance.

At the beginning of June we went to Borgoluce to learn and find out more about the pasta production chain. It is precisely on that occasion that we met and interacted not only with those who grow the wheat, but also with those who convert it, namely Marco Bigolin.

We immediately understood the importance attributed to the diversity of a grain grown in the Veneto region, compared to the same variety grown in warmer regions, and the great desire to preserve the vitality of the grain.

A land-food bond that Marco cares a lot about and that he emphasizes very often.

THE PROCESSING OF THE CEREALS
Once harvested at the end of June / beginning of July, the ideal period for the grain to reach a humidity of less than 14%, the grain is transferred to the mill where it is brushed and sanitized before being stored in large bags waiting for the pasta processing orders.

Grinding is done with stone, so as not to overheat the flours and preserve the properties of the grain. Once the flour is obtained, only vitalized aqueduct water is added (before leaving the tap it passes through a Biovital filter).

The dough obtained is then passed through a bronze die that gives porosity and roughness to the dough, and finally dried. 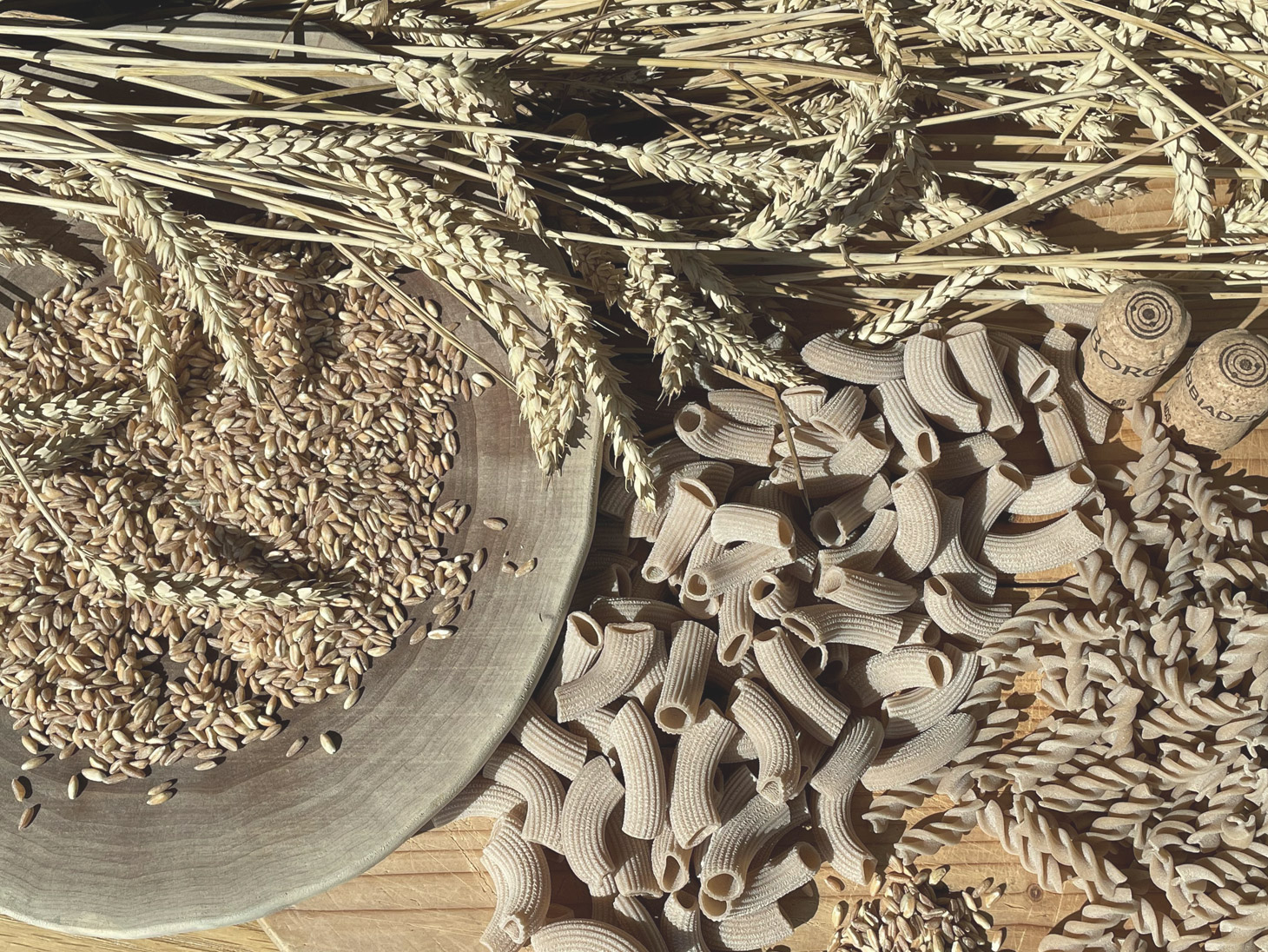 THE CARE DURING DRYING
Drying is one of the great discriminating factors of this product: we could paraphrase "tell me how you dry and I will tell you what pasta you are making".

Marco chooses the slow way: drying at 38 °C for about 40 hours preserves more of the original nutritional properties and obtains a "soft" paste, with a semi-integral colour.

The higher you raise the temperature, the harder and glassier the starches become and the more the vitamins of the cereal are denatured.

THE ITEMS
There will be two items available: the Fusilli Senatore Cappelli and the Rigatoni di Farro. As mentioned the quantities are limited to a thousand kilograms in total, but will allow us to give a sowing orientation for the next campaign to the producer.

An effort that is certainly important for everyone, which we have never set up (it really must be said), but that the Borgoluce project deserves. We look forward to start selling, but also to collect your opinions on the project: do not hesitate to send them to us also through your sales agent.

Viva la pasta and buon appetito to you all!