The long journey of corn

Where does corn come from? How is it prepared around the world? From the Ande...

Where does corn come from? How is it prepared around the world? From the Andean plateau to our mountains, let’s discover it with Vittorio Castellani

The corn we all use today in the form of flour for the preparation of polenta or sweets is the fruit of a plant native to Latin America, which arrived in Europe thanks to Christopher Columbus.
I will tell you about its origins and some recipes that I discovered in my travels in Mexico and Peru... and in Aosta Valley!

THE ORIGINS OF CORN
Corn is to America like rice is to Asia, wheat to the Mediterranean, and millet to Africa.

Many civilizations that based their diet on an ingredient, in this case on a cereal, often revered it as a god.

While visiting the archaeological museums of Mexico City or Lima you will come across illustrations or sculptures depicting Cintéotl, Mama Sara, or Chicomecóatl, to mention some of the most important Corn Gods worshiped by the pre-Columbian civilizations of Maya, Incas, and Aztecs.

For all these ancient peoples the ear of corn, along with few other ingredients such as tomatoes, beans, and potatoes, was the base of nutrition and for this reason was considered sacred, to the point that several mythological tales would make the human race descend from its plant!

For some it was a female deity, linked to fertility and reproduction, for others it was male, due to the phallic shape of its fruit. Its relevance was so important that, depending on the colour of the grains, the deity could manifest in different versions with different powers.
In the Aztec calendar, for example, it is always a female figure.

FACTS AND RECIPES FROM THE WORLD
With corn, ancestral recipes are still prepared in these countries, using ancient techniques and tools.

In order to be transformed into the classic tortillas, the corn had to undergo the nixtamalization process, which involved cooking the grains in an alkaline solution based on wood ash or limewater.

Tamales are made from it, i.e. corn pies, the ancestors of polenta concia, wrapped in corn or banana leaves, Atole or Chicha drinks, often fermented like beer, dozens of crackers cooked on a sort of comal or earthenware griddle: tacos, tortillas, tostadas, sopes, chalupas; some of these, like tortillas, were adopted by the Spanish Conquistadores, who however made them with wheat flour.

If today we consider polenta as a typical Italian dish, strongly rooted in some of our regions, like the mămăligă for Romanians and Moldovans, we must not forget that it is a product of exotic origin.

Spaniards had the merit of introducing it to the West from the Nuevo Mundo but did not make the best of it. Curiously, Spanish cuisine, with the sole exception of some Asturian dishes, introduced in more recent times by migrant communities returning from Latin America, does not use this ingredient, which at the time of Columbus was perceived as an animal feed, not suitable for human consumption.

On its journey to the West, corn had to reinvent itself, in the sense that nothing of the immense pre-Columbian gastronomic culture of corn came down to us. In those times, in fact, ingredients would travel, but they would get separated from the culture of the native peoples who had always used them.

Native Americans were not recognized as having any skill, as they were considered savages.

Despite this, within a century corn and potatoes became one of the foods that fed the poorer classes of peasants and mountaineers, who invented new recipes.

On a recent trip to Aosta Valley I had the opportunity to taste two of them that alone could make us think again about the concept of “peasant cuisine”.

The first is a recipe of yesteryear, resurrected from an ancient Valdostan cookbook thanks to Lo Grand Baou [@lograndbaou], an Alpine trattoria deep in the mountains, and involves cooking a classic polenta, a mix of 50% rough flour and 50% fioretto flour, which is then spread in a cast iron pan in alternated layers with generous doses of fontina, completed on the surface with a layer of julienned white onion sautéed in butter and browned in a wood oven. Sublime!

The second is a creation by chef Stefano Zonca, who left the restaurant Enoteca Pichiorri and its 3 Michelin stars to propose to Refuge Jean-Frédéric Benevolo, over 2,000 meters a.s.l., his mountain cuisine; among the recipes, a polenta concia with a goat cheese of raw milk seasoned in crust and pasture flowers honey. Unbeatable!

Recipe from the world

Pour the corn flour and white flour into a bowl.

Mix the two flours. Add the salt and stir. Pour the water and a tablespoon of extra virgin olive oil.

Stir and knead until you get a smooth and compact dough, then let it rest wrapped in a film for at least 15 min.

Divide the dough into balls. With the help of two sheets of film or parchment paper, spread the balls with a rolling pin or in the tortilla press, so as to obtain discs with a diameter of 15 cm and a thickness of about 5 millimetres.

Grease the bottom of a non-stick pan with extra virgin olive oil and let them brown first on one side and then on the other.

Separately, sprinkle with fine salt the raw fish fillets which must be perfectly cleaned with no bones left.

Wash them under cold water and dry them carefully, pressing them gently with absorbent paper.

Cut the fillets into cubes with 1-cm sides and place them in a bowl, together with the ice.

Squeeze the limes, filter the juice, and pour it over the fish.

Clean the garlic, remove the heart from it, cut it into quarters and add it to the fish.

Stir and leave to rest for 15 minutes, season with fine salt and some chilli pepper to taste.

Spread your ceviche by spoonfuls over the tostadas, decorate with coriander leaves, and complete with white pepper. 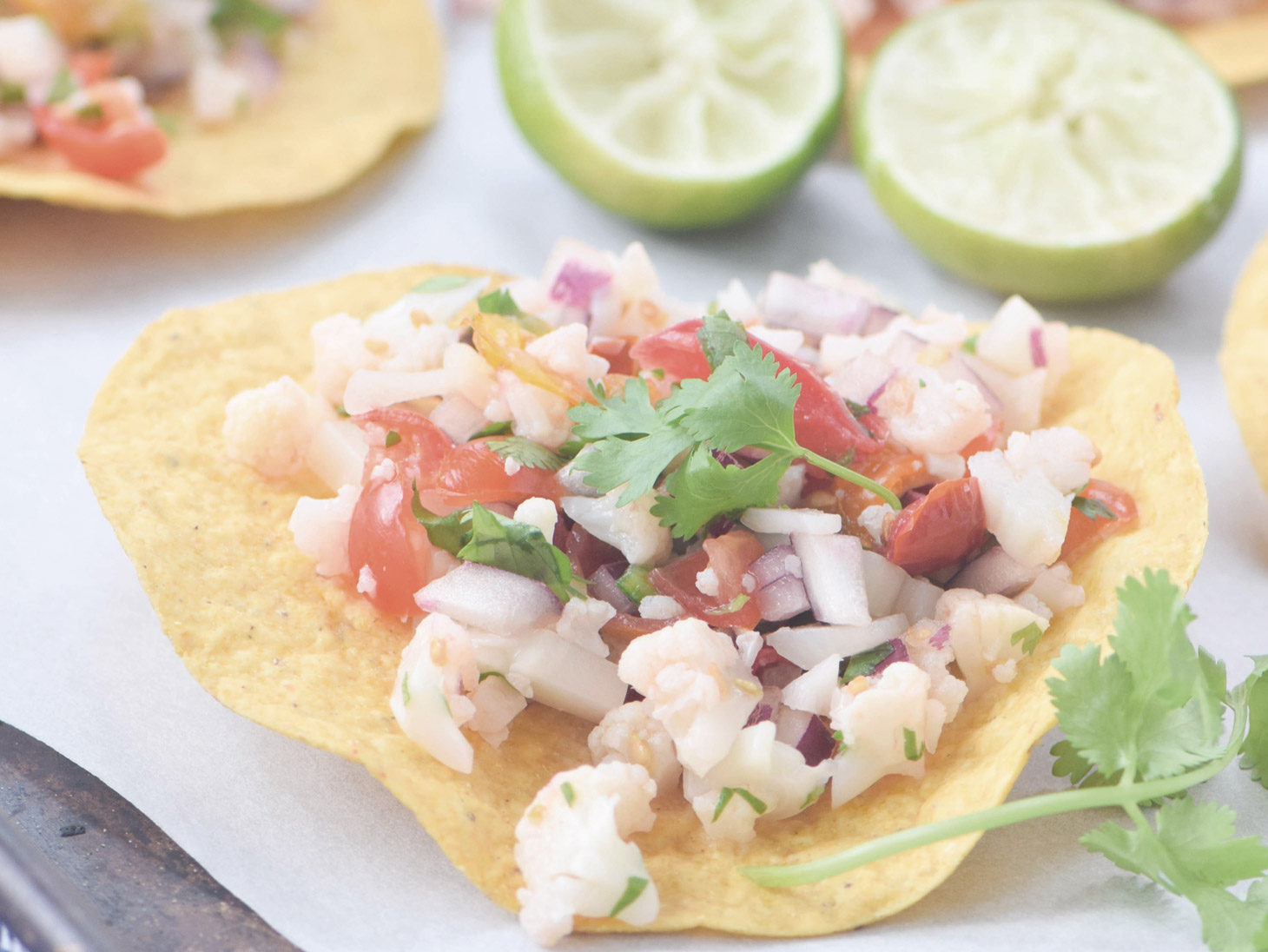 INGREDIENTS
FOR THE TOSTADAS: 120 g of Marano Borgoluce corn flour, 80 g of type 00 wheat flour, about 7 g of salt, about 80 ml of water, 2 tablespoons of evo oil

Pour the corn flour and white flour into a bowl. Mix the two flours. Add the salt and stir. Then pour the water and a tablespoon of extra virgin olive oil into the bowl.

Mix well and knead vigorously, until you get a smooth and compact dough, then let it rest wrapped in a film for at least 15 min.

Divide the dough into balls.

With the help of two sheets of film or parchment paper, spread the balls with a rolling pin or in the tortilla press, so as to obtain discs with a diameter of 15 cm and a thickness of about 5 millimetres.

Grease the bottom of a non-stick pan with extra virgin olive oil and let them brown first on one side and then on the other.

Separately, fillet the chicken breast, peel and cut the avocado into cubes, brunoise the onion and prepare a vinaigrette by mixing together the lime juice, salt with honey, and extra virgin olive oil.

Mix all the chicken salad ingredients in a bowl and season with the vinaigrette.

Spread the chicken salad on the tostadas and serve. 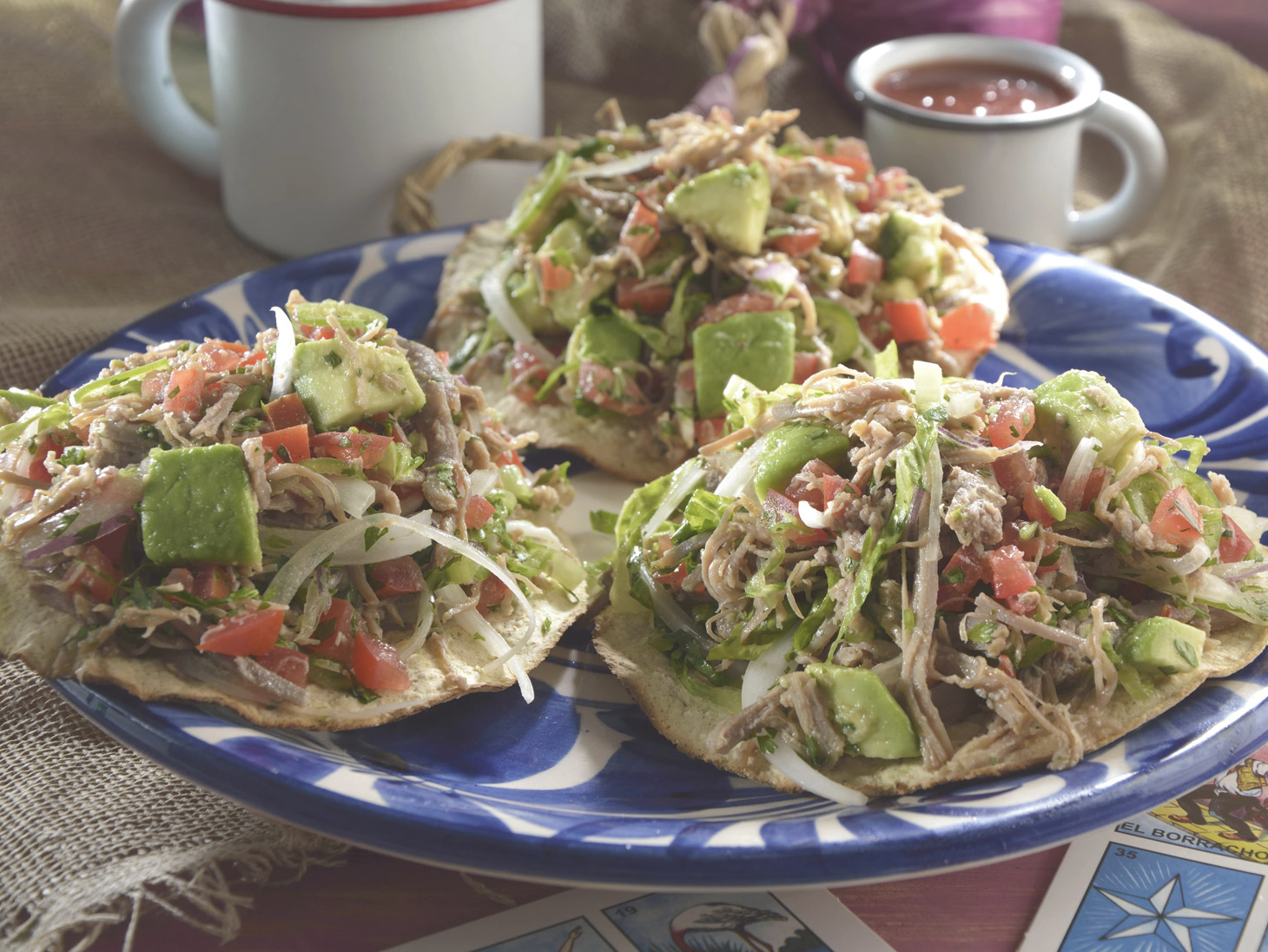