Love for their land, a strong commitment to recover a tradition that was disa...

Love for their land, a strong commitment to recover a tradition that was disappearing, a lot of passion, and above all social responsability: this is the picture of the ancient Manifattura of I Marinati di Comacchio I Marinati di Comacchio is a company really focused on people and environment. Not just as a slogan, but as a fact.

The Po river Delta has been home to eel-marinating factories for centuries. The most important processing center was the Manifattura dei Marinati in Comacchio, founded in 1905 (the word “Manifattura” describes a factory where hundreds of people were employed, but the job was still hand craft, not yet industrialised).

Manifattura dei Marinati is now used both as a museum and as a historical fish processing plant. Within the ancient Manifattura, I Marinati managed to recover the tradition of marinating eels, a tradition which dates back to the 1600s in Comacchio area.

“The subject is not the product. Products give us the opportunity to tell who we are. The real subject are the people that makes the products. It’s people who do things“

Alessandro Menegatti is the director of Work and Services, the social cooperative that handle fish products processing within the Manifattura dei Marinati of Comacchio.

Founded in 2000 by a voluntary association, Work and Services is a social cooperative, whose activity is aimed at integrating people with disabilities and social fragility into the world of work. Work is considered an educational tool for the reintegration of people with difficulties, the real goal is to enhance people, humanly and socially. “I have a degree in philosophy, so I not able to do almost anything, I just saved myself a little bit because I used to help in the family hardware store”.

Alessandro jokes. After graduating, Alessandro started working as an educator in a cooperative in Comacchio. Work and Services began collaborating with I Marinati through the Po Delta Park. Now the two realities are one and the same: fish processing becomes a laboratory for social reintegration and work inclusion, an educational laboratory, a chanche for meeting people.

When Alessandro looks into your eyes, he looks inside you. When he speaks, he does it with an authenticity that sometimes may result uncomfortable, as it place you in front of yourself, asking: “What about me? What am I doing to make the world a better place?”

Listening to Alessandro reminds me of a book I recently read, entitled “Il Tempo dei Nuovi Eroi (Time for New Heroes)”, written by Oscar de Montigny, Marketing and Innovation Manager of an important Italian banking group. He describes the foundations of Economy 0.0, an approach to business which is focused on mankind and environment sustainability, where profit is a mean, a result, not the purporse of the company.

“Everyone of us can become a New Hero” says Oscar in his book. Alessandro has taken up the challange. Meeting companies like I Marinati is a touching experience, that leaves a mark in your soul for the values they live and share every day.

Resilience. Deciding to remain in an area that is the “tail” of the Italian productive North East, creating job opportunities and value for the territory.

Courage. Facing situations of disadvantage, trying to overcome them, keeping the focus on people and personal relationships.

Commitment. Carrying on the tradition of wild eel of the Comacchio Valleys, enhancing its history and craftsmanship. 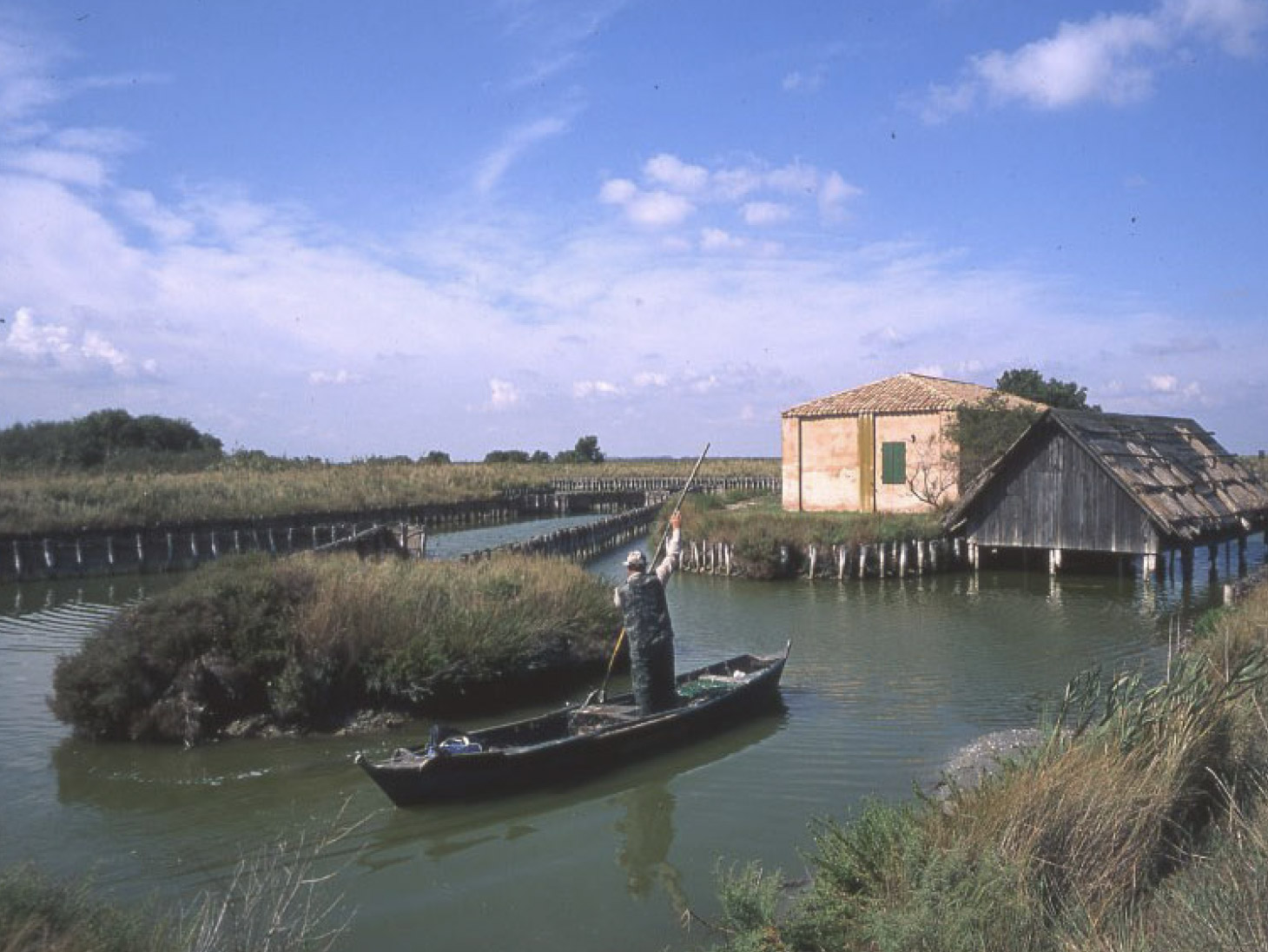 The wild eel is a snake-like fish that reproduces in the Sargasso Sea, but carries out a life cycle of 7-10 years in inland waters; when it is sexually mature it feels the instinct to migrate towards the sea to reproduce; it is at this moment that the eels are captured with the “lavorieri”, barriers positioned near the outlets to the sea and in the internal canals, designed to capture adult fish and at the same time allow new eels to enter the valley.

The wild eel is fished from October to December, only when there are three conditions: “Bora” wind; black moon; high tide. With these conditions the fishermen “open the water”, allowing the eels to enter the “lavorieri”.

Only “capitoni”, female eels weighting more than one kilo, are suitable for marinating, a process that is done only in the winter.

Male eels are roasted on the grill, whereas females are cleaned, cut into “morelli” (small slices), skewered and roasted in the chimneys of the Manifattura with holm oak wood, then preserved in brine with vinegar, water, Cervia salt and a bay leaf. Marinate eel, together with anchovies, are part of the traditional “valley” product line by I Marinati, a line of fish that is only caught in the canals of Comacchio Valleys.

Anchovies enter “the valley” in spring, from the sea through the network of veins and canals that constitute the lagoon of the Comacchio Valleys and return to the sea in autumn, between September and October.

Anchovies are fished with the “lavoriero”, brought alive to the Manifattura, where they are washed, floured, fried with sunflower oil and left to rest for a whole day, then preserved in brine with vinegar, water and salt. But there is also a new “sea” product line, created to process fish not only in autumn but throughout the year, guaranteeing a continuity of work: alici fished in the Adriatic Sea, in the Po Delta area, processed by hand, one by one, marinated in vinegar and salt for a whole night, then preserved in sunflower oil; sardines fished in the Adriatic Sea, in the area of the Po Delta with trawls, fried and marinated in wine vinegar.

“Alici per gli Amici” i.e. “Anchovies for Friends” and “S’Arde in Compagnia”, a joke with the Italian name of sardines, that sounds something like a “Flaring friendship”: for your friends you choose special products, to be enjoyed together. The name of these products close the circle, strengthening once again the vision of this company. Really special.