The virtues of alpage

Guardians of the mountains, reinventing ancestral knowledge and traditions, t...

Guardians of the mountains, reinventing ancestral knowledge and traditions, to give new life to the alpage. With benefits for our palate, landscape and environment

Peace. This is what I feel every time I visit a mountain pasture, for an interview or simply for walk. The cheeky green of the grass, the silence broken by the ringing of grazing animals, the scent of flowers (and not only).Peace, harmony with nature. More and more often it happens to me to meet people who choose to leave everything to live on the mountain.

And every time I ask myself why, how is it possible to renounce the comforts to which we are accustomed to “retire” to live in the pasture. It’s a life of sacrifices: days that begin before sunrise, hard work outdoors regardless of weather forecasts, spartan homes.

Unforgettable was for me the visit to the “calecc”, where Storico Ribelle is produced: four walls on which a tent is mounted, as men and animals move on the higher pastures, with the advance of summer.

Not just dreams but vision. Not only commitment, but entrepreneurship

“Kill Heidi” is the book suggested by Marta Zampieri: “mountains are not the idylliac place the cartoons suggested, you have to be creative and solve problems quickly”.

I found the same entrepreneurial approach in Milady Cortese, in Malga Verde, on the Asiago Plateau. Also Milady left her job as a clerk for returning to the pastures to help her father: “After five years I was tired, the work was repetitive, I lacked contact with people and with nature”.

And like Pian di Levina, Malga Verde is also a multi-functional activity, which combines breeding with cheese production and hospitality. One more alpage, Malga Mariech, with a beautiful story to tell. Fabio Curto has been able to merge his studies (a degree in Veterinary Medicine) with the experience of his father Italo, cheesemaker since 1974.

Fabio uses to say that “yesterday’s innovation is today’s tradition”.

Together they manage the alpage in summer, the dairy, the agriturism and the breeding of Bruna Italiana cows: in summer in Malga Mariech, in winter in their farm in Vidor (with one of the most avant-garde stables in Europe, completely robotised) . After years of no interest, even the legislator has finally become aware of the social and environmental value of mountain pastures and the role of the herdsmen as guardians of territory, “knowledge” and local traditions.

Finally it begins to distinguish between rural development plans for the plain and the mountains, which have completely different needs. A Lombardy regional law, D.g.r. 4 February 2019 n. XI / 1209, says:

The Region recognizes the environmental, economic and social function of the alpage, “which constitute an asset of collective interest.The correct management of mountain pastures contributes to guaranteeing the conservation of biodiversity, landscapes and hydrogeological structure of the mountain”.

The protection of alpine pastures will stop the progressive landscape transformation, which leads to the gradual disappearance of the grazing lands, due to the expansion of forest.And it will favors the reintroduction of local breeds, in particular Bruna or other endangered breeds, custodians of genetic biodiversity, more suited to mountain pastures.

The regional “Guidelines for the management of mountain pastures and farming”, enclosed to the law, identify some development directions, which respond to the need to combine the conservation of natural resources with the continuity and development of traditional activities, and at the same time producing a fair income for the herdsmen.

First of alla multifunctionality, i.e. combining traditional dairy production with hospitality, building a network both with public and private actors. But also the conservation of the landscape, closely linked to the ability to develop tourist attractiveness.

Values in which we have always believed, finally written black on white, in a regulation.

We have always tried to enhance and promote alpage cheeses, first all for their distinctive organoleptic qualities, but also for their attitude to express the terroir they come from, especially the raw milk ones Meanwhile we have discovered that alpage milk has a higher nutritional value: a few years ago a research by Formaggi Trentini Group showed that mountain milk contains a greater quantity of lipids, with a better quality (Cla, Ala , Unsaturated fatty acids), a greater content in antioxidant substances (fat-soluble vitamins E, polyphenols and carotenoids) and a higher content of compounds conferring aromas (terpenes, carotenoids, volatile aromatic constituents of fatty acids).

Now let’s add another piece, one more reason to choose an alpage cheese.

This is one of the results of the research “Good for the planet, good for our health”, produced by Slow Food with the scientific support of Indaco2, a spin-off of the University of Siena. 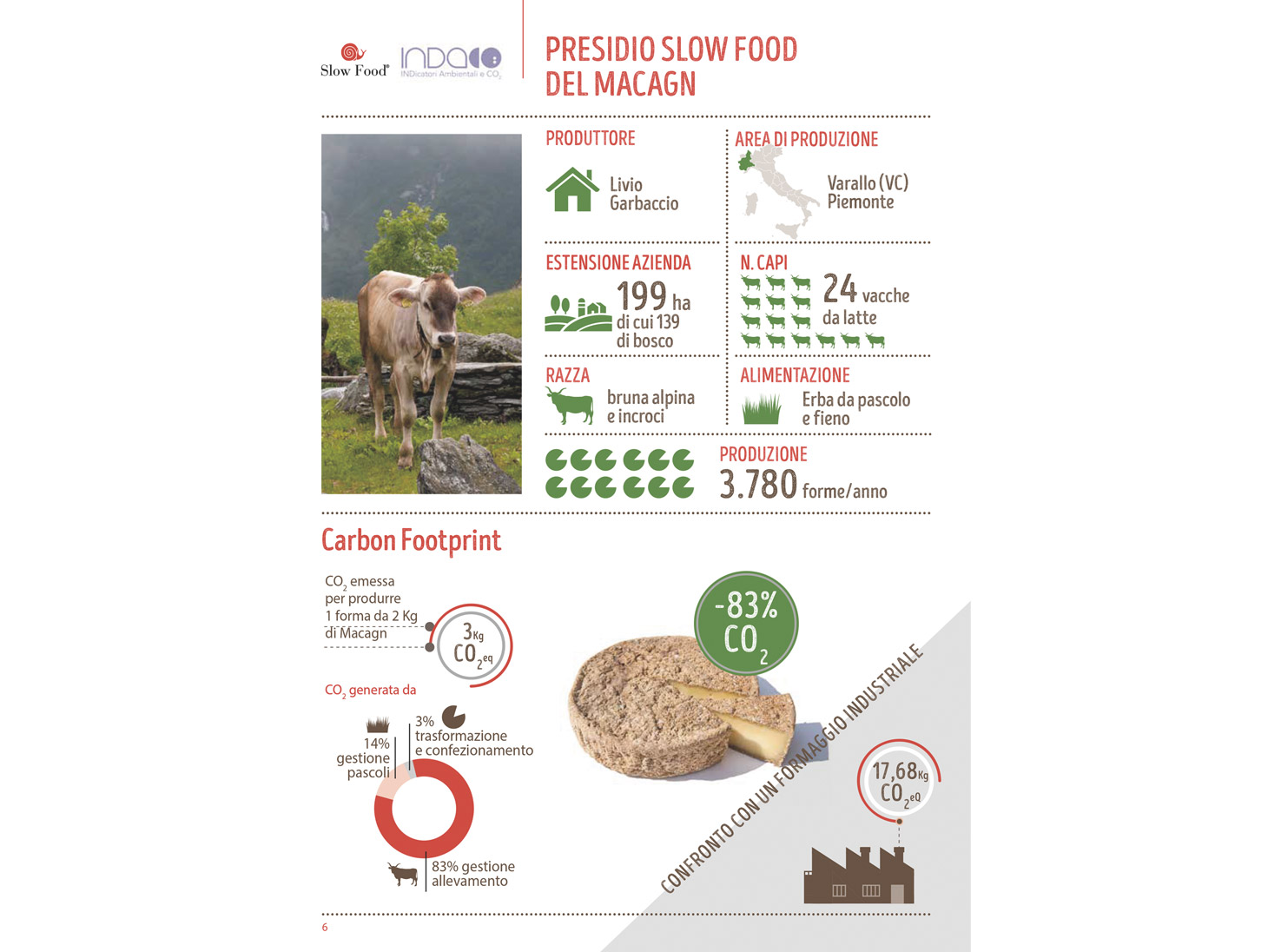 Grazing feeding, self-production of hay, natural fertilization, artisan processing: these are all factors that reduce the environmental impact of small productions, which release on average 30% less carbon dioxide, up to 80% less.

It should also be considered that extensive farms, which include large green areas, absorb the same or even a greater amount of carbon dioxin emitted into the atmosphere during production processes.

An example? The carbon dioxide emission to produce a 2 kg wheel of Macagn (Slow Food Presidia) is equal to 3 kg, compared to 17,68 kg of CO2 eq of an industrial cheese. The estimated annual savings is 1,035 tons of CO2 eq, corresponding to the emissions of a car traveling 154,100 km!

Chapeau therefore to these guys who have been able to reinvent tradition, not just repeating millenary gestures but exploiting new skills and technologies to revive the mountain. For the benefit of our palate, the landscape and the environment.