“Country you go, Salame you find”. I’d like to start this way, thinking abo... 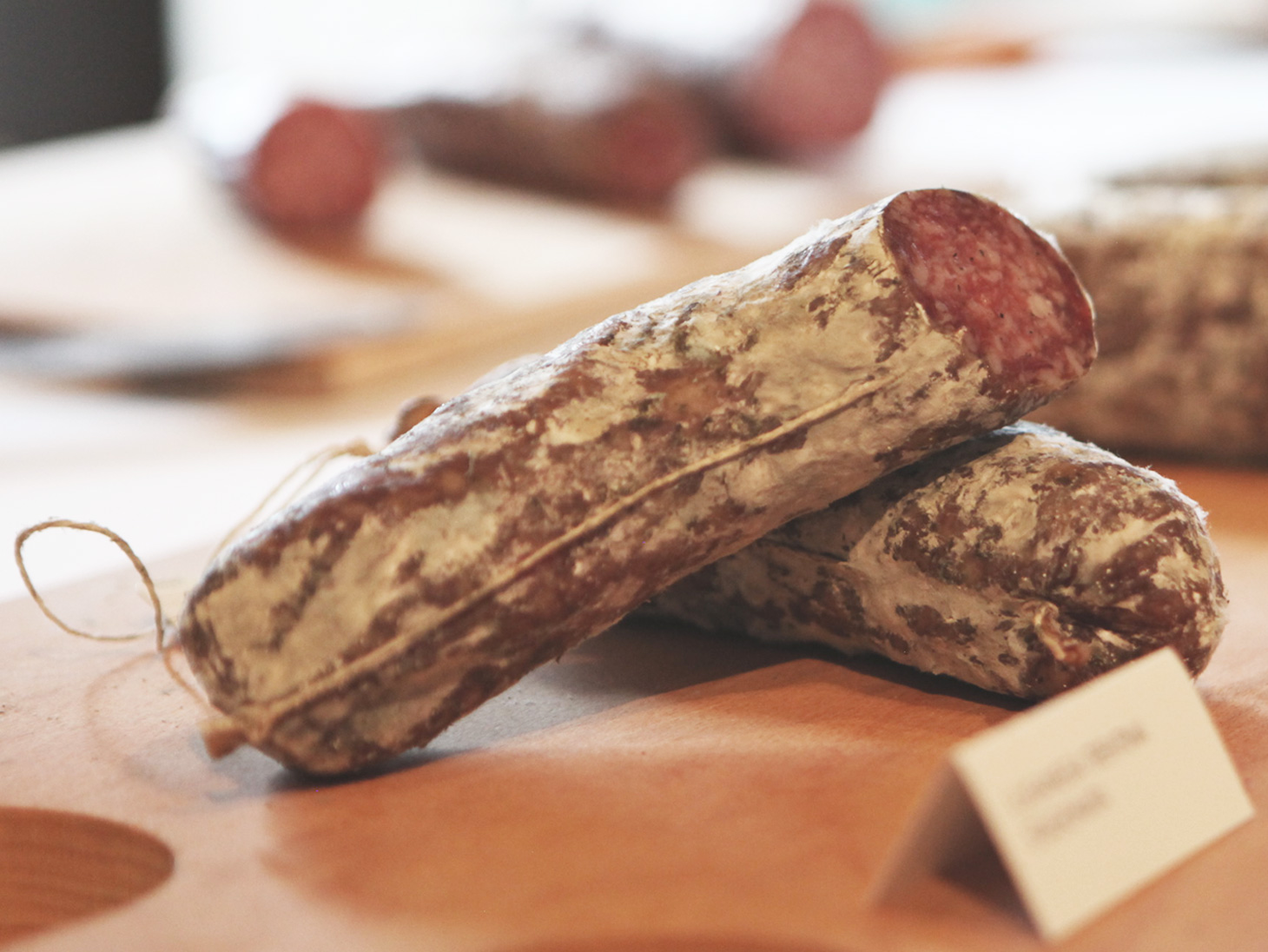 “Country you go, Salame you find”. I’d like to start this way, thinking about Salame, a simple piece of charcuterie that in every region, province or country developed itself with a creed or, trivially, with the availability of the raw material. This extreme fragmentation leads often debates about which is the best Salame. Who never had to take side for soft Salame or hard Salame? With or without garlic? The debate is open!

We imagined a travel journey from North to South, touching different productive realities, taking from them the main peculiarity and trying to understand how different latitudes and costumes influenced the production through.

Let’s begin in Valsugana, with the Salame di Meggio, filled in a natural bladder, aged at least 30 days and son of a rustic tradition that want garlic like a key player. It shows a thin grain, low fat, although it is sweet to the palate, without acidity due to the long drying time.

We move then to Spilimbergo in Friuli Venezia Giulia with Salame Lovison, more fatty and young compared to the previous one, with typical characteristic of North-West: soft texture and extremely fresh. Traditionally it was produced in Christmas period to be consumed fresh the first days of festivity. The rigid climatic conditions and salt helped to preserve the product for a short amount of time.

Leaving behind us Friuli we get close to another little known identity, produced by Grossetti, the Salame Piacentino DOP. Piacenza’s charcuterie, already known in the XV century, were the favourites by merchants in Milan. At the beginning of ‘700 they accessed the elite groups of France and Spain, thanks to a well-known cardinal from Piacenza who brought them in gift as a gourmet business card.That’s just an example on how a part of gastronomy succeeded in elite groups before the working-class. The Grossetti’s Salame has a medium grain, with few fat parts well distinguished. The scent of mature meat and the light spicing anticipate a sweet taste, persistent and never too spiced.

It is now automatic to think of how it is almost mandatory to look for sweetness in a salami, but in Tuscany they do not totally agree on that. When we try Tuscan Salame of Marini the intensity of seasoning, the high thinness of the meat and the clear distinction of fats make us appreciate the intensity and the sapidity, also given by the presence of Chianti wine in the dough. Also, do not forget the unique relationship between bread and salami: the sapidity of the Salame is counter-balanced with the “pane sciapo” that is bread without salt.

Heading South we run into more compacts meats with aromatic or spicy flavours. The Arabic influence, in a definitely hard climatic conditions, imposed stronger seasonings to protect the meats. Anyway we found two sweet products, although in a different way.

The Salame Casereccio of Murgia by Santoro, in Apulia, has a sweet and well balanced taste, coming from the equilibrium between meats of mature pigs wild breed and the seasoning, characterized by the presence of “vin cotto” that s boiled wine. Finally, also a smoked hint like for the well known Capocollo di Martina Franca.

The Salame di suino Nero dei Nebrodi by Luisa and Agostino Ninone, in Sicily , with a sweetness and solubility that comes mainly from the precious meat of the INDIGENOUS black pig , wild breed at least for two years. The strong presence of pepper in grain and the fat complete a unique taste.

Here we are at the end of our Salame trip. The variety is enormous and can satisfy all the tastes, we expect that you’ve found your favourite!