Rustica is one of the most versatile focaccia, a reliable base that we have d...

Rustica is one of the most versatile focaccia, a reliable base that we have declined in three proposals, for which you can also find the calculation of the food cost
⏱ 3 MINUTES READING

CHAMELEONIC FOCACCIA
Rustic and chameleonic: are we talking about proposals for the oven or about a particularly eclectic person? I confess that I would be very interested in meeting a person with such characteristics, but today we are talking about bread, or rather, the organic Focaccia Rustica by Follador.

Perhaps one of the most practical and easy to use proposals, hence the adjective "rustic" (rustica, the commercial name of this focaccia, in italian means "simple, not demanding") and for this reason one of the most versatile and therefore chameleonic.

IN THE BAKARY
It is produced with type 1 and 2 organic flours from Veneto and Friuli Venezia Giulia regions. The dough is worked starting from the biga, a kind of fermented pre-dough prepared daily, then it is broken and rounded mechanically. It is entrusted afterwards to the hands of the bakers, who prepare the product for subsequent leavening, dividing and resting.

The Rustica goes through a two-stage leavening cycle and before being cooked it rests in a pan which gives it its round and rather regular shape, with a diameter of about 24 cm. Finally, it is cooked at 280 °C for 4-5 minutes and packaged in ATM. This is now a hallmark of Antonio Follador's productions, a certainty we have become accustomed to and which guarantees promptness of response to particularly intense or unexpected work flows.

LET'S TALK ABOUT REGENERATION
The Rustica, like the other products by Follador, is partially cooked, so after being removed from the fridge (where I remember it should be kept!) it only requires a regeneration in a ventilated oven, on a tray (better if perforated) at about 220 ° C for about 4 to 5 minutes.

If regenerated before being stuffed, the focaccia will ensure a final result with a pleasant crunchy effect. Alternatively, for preparations that require a softer base, it can be stuffed first and then finished in the oven.

AT THE TABLE
I think of Rustica as a passpartout that allows you to solve various situations: from the small piece with a slice of marinated rump and a few flakes of pecorino ideal for an aperitif, to the tastiest proposals with rich fillings and melted cheeses, perfect for who intends to have lunch or dinner.

Here we offer three versions: the classic pizza version enriched with Cantabrian anchovy fillets; the stuffed focaccia, another great Italian classic, a timeless recipe and a guarantee of success; a rolled version that makes the Rustica almost unrecognizable, disguised as a rolled piadina... but with more substance.

All accompanied by a chart that is very important to us: that of food cost.

RUSTICA ROLL
After cutting the focaccia horizontally (as if to stuff it), each half was spread with Crema del Piave and then covered with lambs lattuce and Rustichello cooked ham. It was then rolled up on itself and sealed with film to hold the shape (better vacuum packed). At the time of cooking, the roll was put in the oven at 230 °C for 5 minutes and then cut in half. From one Rustica you get 2 whole rolls, so 4 portions. 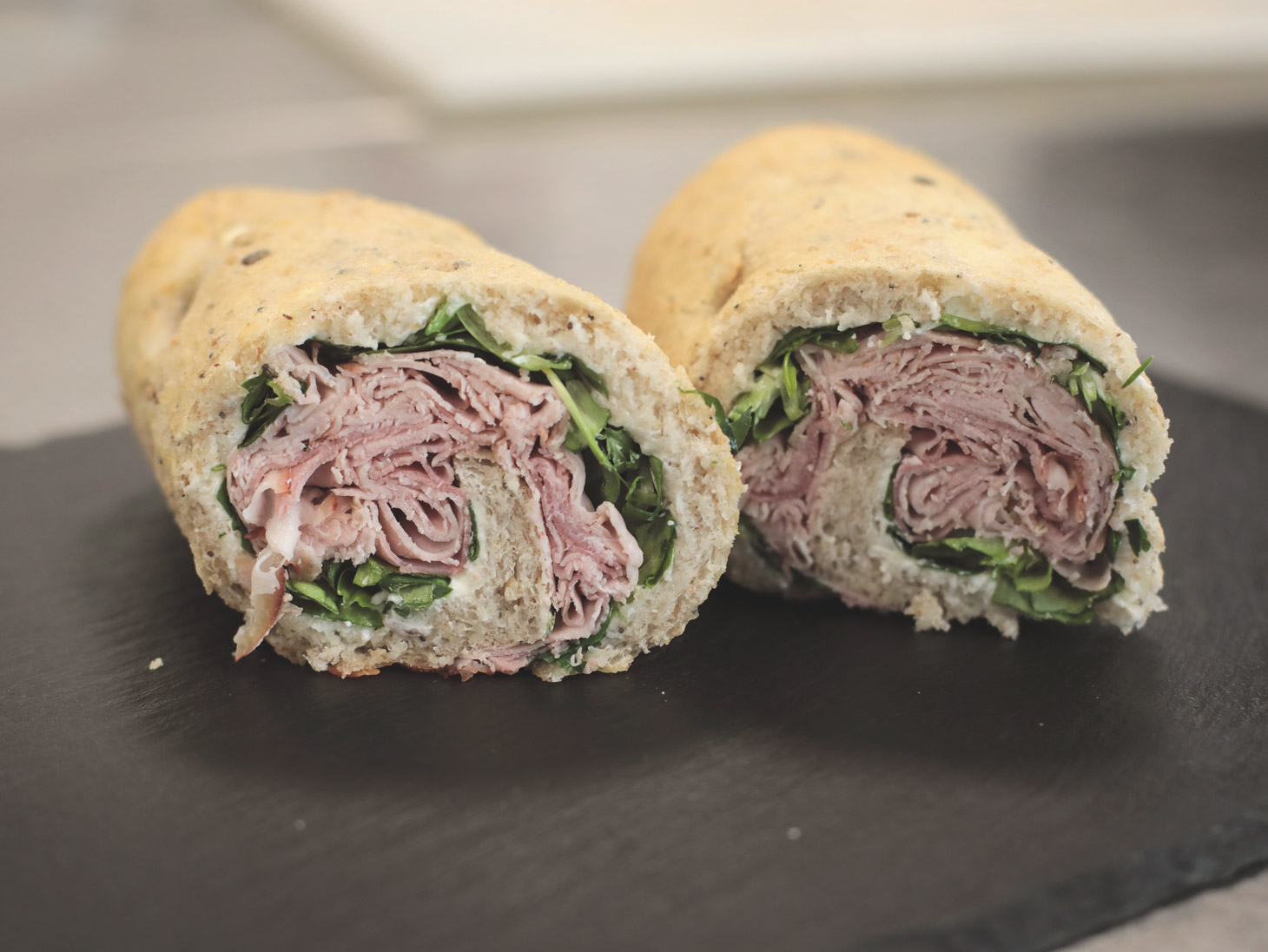 RUSTICA IN PIZZA STYLE
The focaccia was removed from the fridge and spreaded with tomato sauce, leaving a part of the edge free, then it was baked in the oven at 230 °C for about 5 minutes so as to brown the edges. After cooking it was enriched with Borgoluce buffalo mozzarella and some Cantabrian anchovy fillets. A drizzle of oil and that's it! This Rustica can be divided into 8 wedges (for an aperitif portion) or into larger portions. 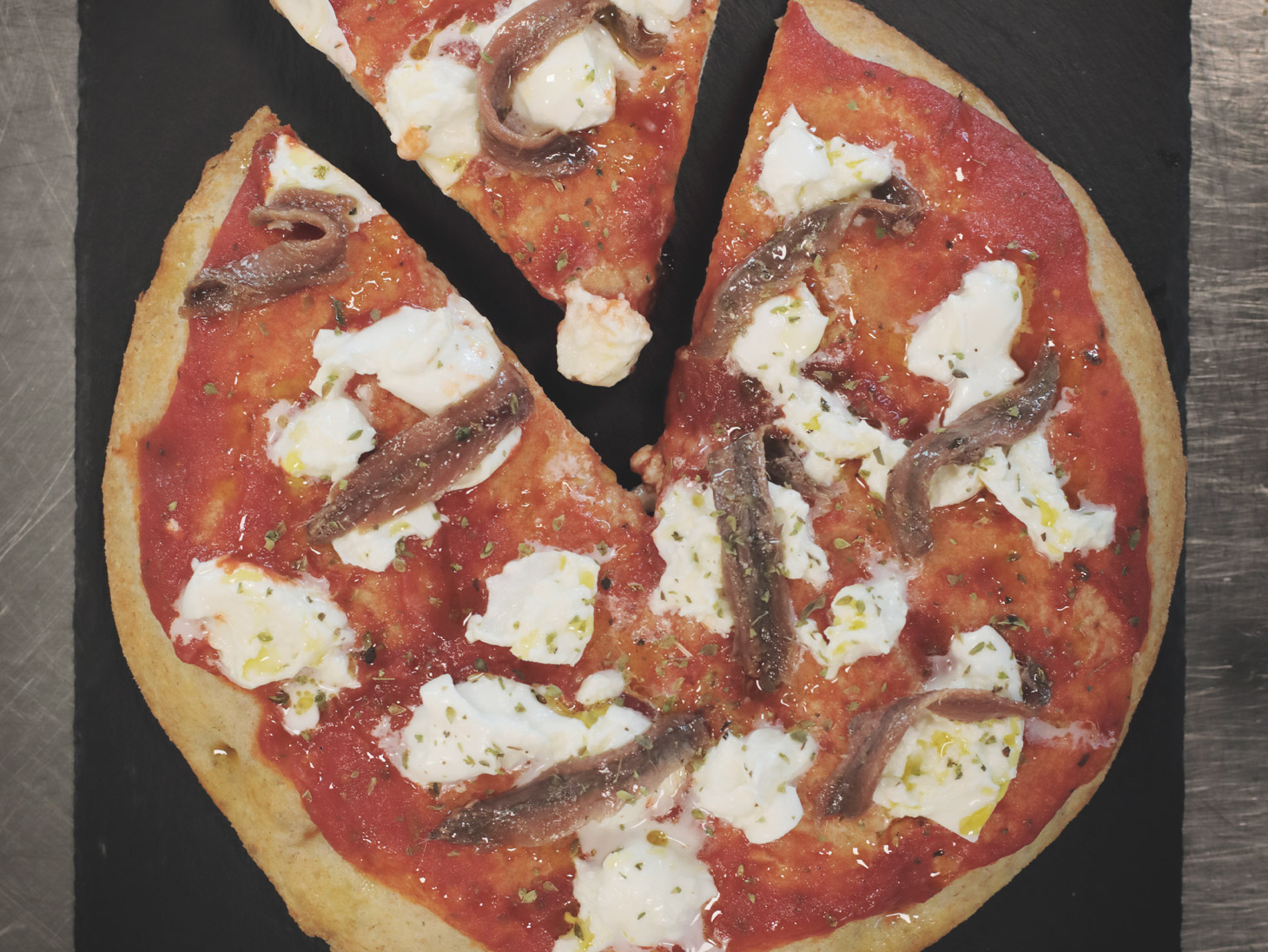 RUSTICA IMBOTTITA
The focaccia was taken out of the fridge and regenerated in the oven at 230 °C until golden brown. It was then cut in half and stuffed with a soft cheese that maintains still the filling, we used Squacquerone DOP, rocket and Gran Culatta Casa Graziano. A tip: stuff the center more generously so that it will be more inviting when cut! 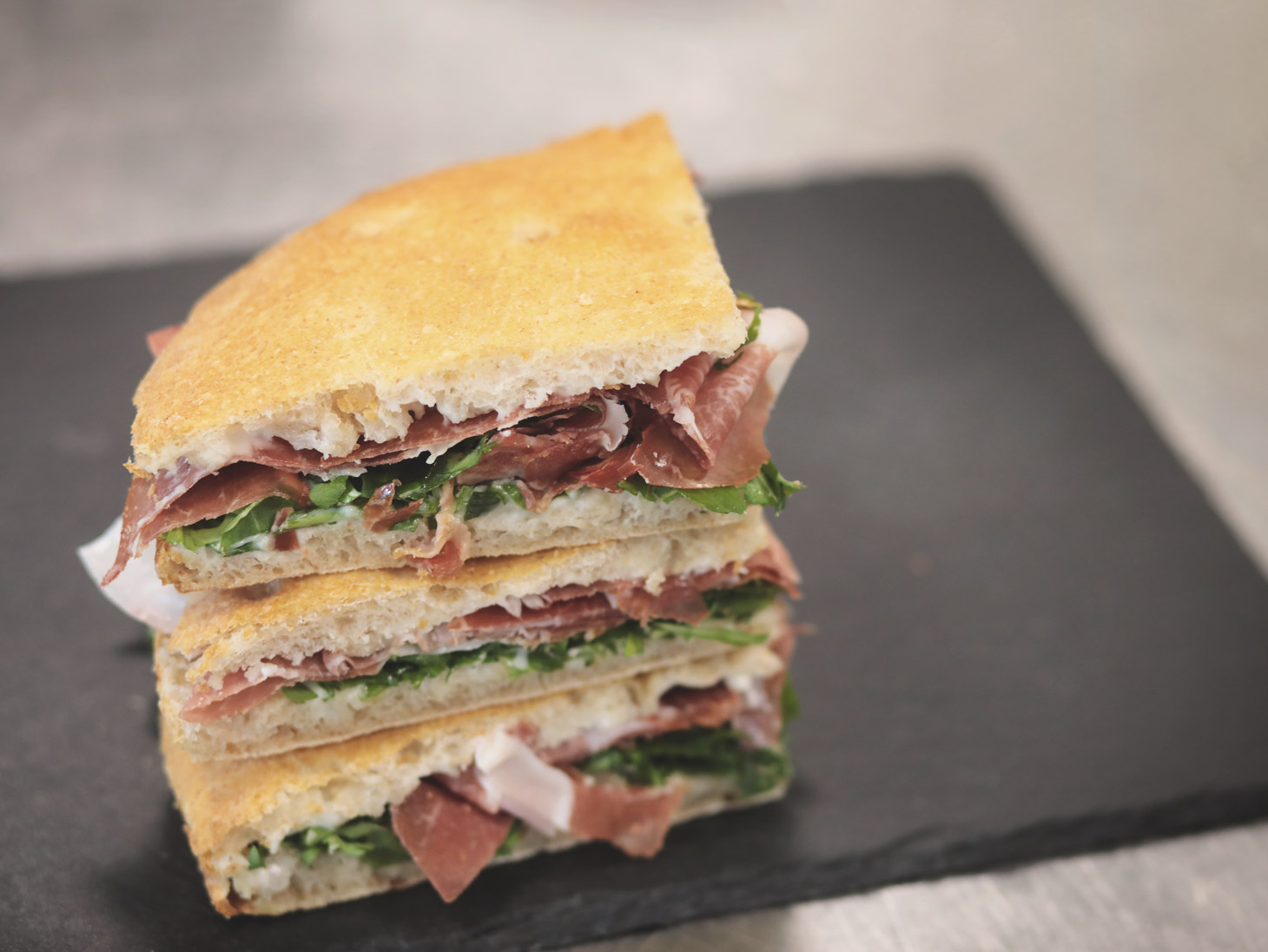