Porchetta from Lazio or from the Veneto region? From the countryside food fes...

Porchetta from Lazio or from the Veneto region? From the countryside food festivals to the restaurants, porchetta has almost conquered the entire Italian peninsula
⏱ 3 MINUTES READING

We interviewed Giorgio Leopardi and Alessandro Meggiolaro to understand the differences between their two products.

LEOPARDI
One of top recipe of the trattoria opened in 1924 by Empedocle Leopardi in Rome was porchetta, a typical dish from Lazio, whose origins date back to the Roman Empire, a time when the Romans used to eat it together with “vino dei Castelli”.

During the World War II however, with the bombings on Rome, the trattoria was destroyed and in 1947 Empedocle’s son, Francesco, decided to relaunch the production in his own home, where he equipped a small outdoor workshop with faggot ovens, to roast the pig and then sell it in the squares of the city.

“With my dad Ivo, who is still working with us nowadays, the production raised, we bought a commercial space in the old town of Ariccia and we started selling wholesale porchetta”, explains Giorgio Leopardi, who is now taking over the family business with his sister Gloria.
Today the Leopardi family has around 50 employees who work in two factories: one in Ariccia, a recently renovated factory and dedicated to the production of porchetta IGP (PGI), and one in Albano Laziale where other types of cured meats are made: bacon, guanciale and much more.

From a small home-based business, they have now reached a production of 1000-1500 porchetta per week. Still today the work is mainly handmade and artisanal, and it is probably also for this reason that the fame of the Leopardi’s porchetta di Ariccia IGP has spread through Italy and abroad.

MEGGIOLARO
From the early ‘90s porchetta has fully entered the Venetian tradition, and has become an extremely popular product, that can’t miss at the local food festivals.

Indeed, it is porchetta one of leading product of the artisanal charcuterie producer Meggiolaro, specialized in the production of cooked and roasted meat and born in 1978 from the intuition of Nello Meggiolaro and his wife Marina.

The two opened a small laboratory where they have personally taken care of all the steps of the production process from the beginning. Here they conceived their first recipes, free from artificial additives and preservatives, and have tested a slow, “natural” and low- temperature cooking.

Since their childhood Alessandro and Gessica, Nello and Marina’s children, have learned the trade secrets supporting their parents in the production.

In 2008 they moved to the factory in Stra (VE), where they currently work: “In the meantime we begun joining some of the industry trade fairs, where our products have soon been acknowledged, obtaining meaningful reviews and being introduced into the menus of some Michelin-starred restaurants” says Alessandro.

We are still a small artisanal business, but we have also become a symbol of the made in Italy quality: today we are constantly exporting to Great Britain, Germany, and Czech Republic. 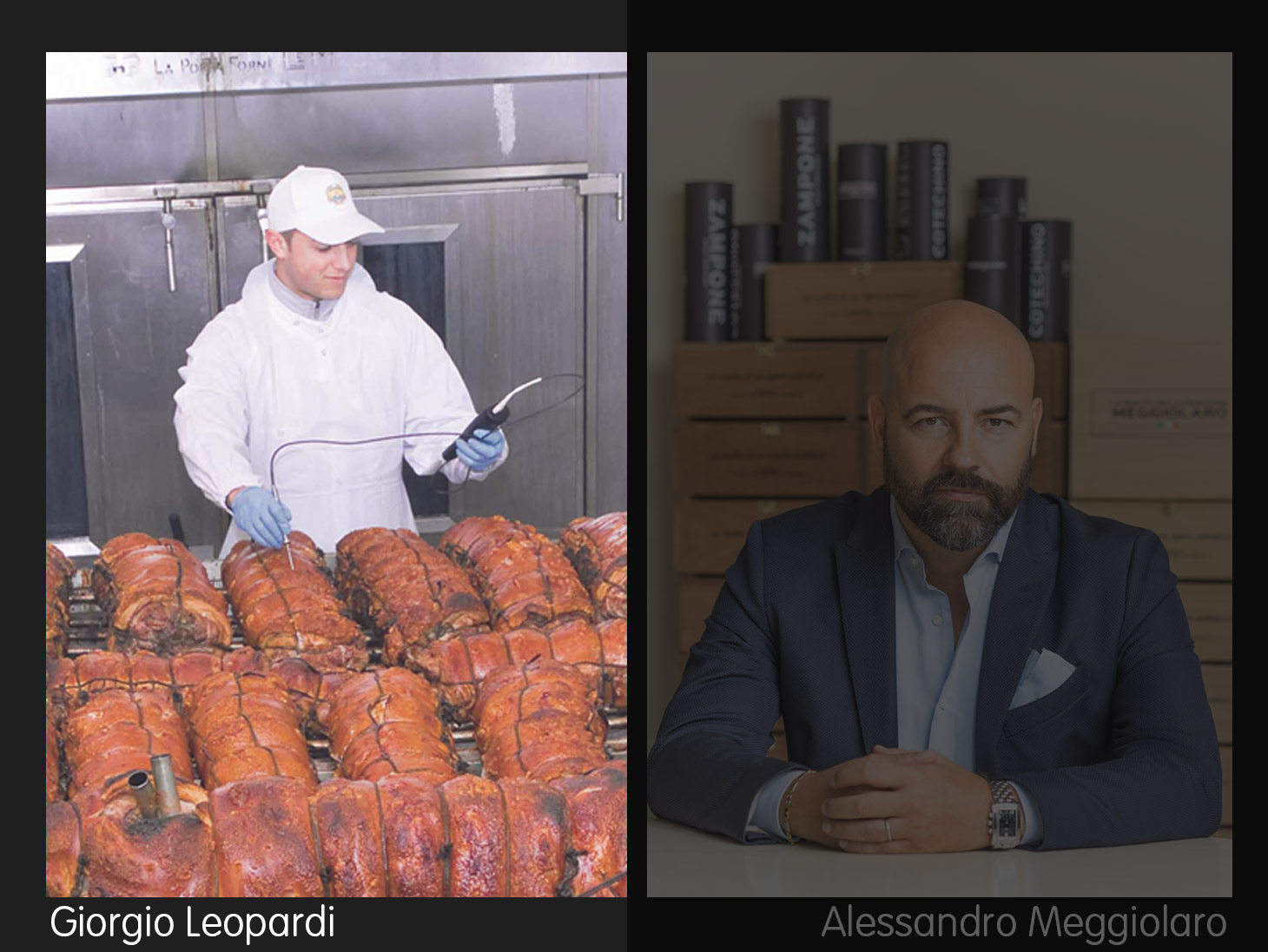 2.Is it protected by a PGI made?

Yes, it is a certified IGP (PGI) product.

3. Where does the meat come from?

From pigs that are born and raised in Italy.

Tronchetto, which is a cut from a half pig, included between the third dorsal vertebra and the last lumbar one.

5. Which spices do you use?

It is a slow and uniform cooking in the oven, similar to a steam cooking method, that lasts around 4 hours, with a temperature that varies from 220°C to 250°C degrees.

7. Why is your product different?

Because of the raw materials, that come from Italian pigs, and for our cooking method, that allows to maintain a crispy rind and tender meats on the inside: in this way the pork meat will remain pale pink once cut, very tasty and juicy.

8. How do you recommend to tasteit?

Beside the classic sandwich, porchetta can also be served as a main course, with accompanying side dishes. In the summer it is perfect as a single course, combined with Pachino cherry tomatoes, parmesan and Balsamic glaze.

9. Which wine would you match it?

The classic red wine of Castelli romani, as tradition requires.

10. Should it be warmed up before tasting?

It is normally consumed at ambient temperature, but it is a matter of personal taste preference.

Absolutely. It is a characteristic of the product, because using Italian pigs, the pork meat is a little bit fatter and the rind remain crispy also if it is vacuum packed. 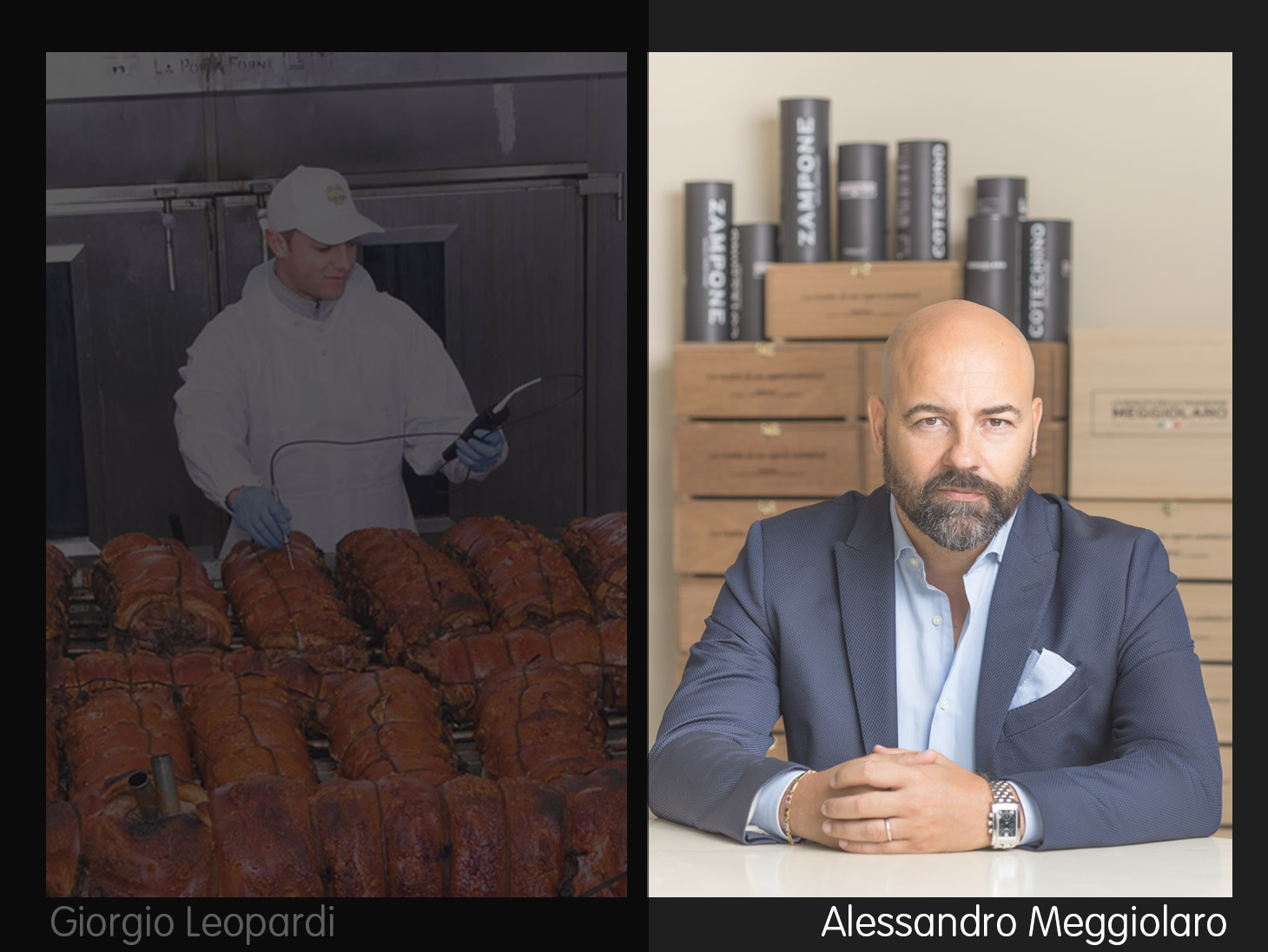 3. Where does the meat come from?

We use pig meat coming from the Netherlands, that is selected because of its tenderness, pale pink colour and its right proportion between fat and lean meat.

We use all the cuts of half pigs, apart from the pork shoulder, because it has a reddish colour that would not match with the rest.

5. Which spices do you use?

A mix of about twenty spices and herbs: the most important are rosemary, garlic, fennel, juniper, cloves and laurel leaves.

The cooking in the oven is divided in 5 steps and lasts 25 hours, with a dry-heat treatment at a medium temperature of 80°C degrees. It is similar to a roasting process.

7. Why is your product different?

Because it is free of preservatives and additives. Considering its pleasantness to the palate, the cooking method that we use can make the difference, it gives to the porchetta the typical colour and the aroma of roasting meat, maintaining it buttery on the inside.

8. How do you recommend to tasteit?

In a classic sandwich or in a dish, it does not need anything except, eventually, a little bit of salt and pepper.

9. Which wine would you match it?

As it is a poor product, it can be ennobled with some sparkling wines, made using the méthode Champenoise: Franciacorta, Trentodoc or a champagne.

10. Should it be warmed up before tasting?

It can be warmed up, but it is delicious also at ambient temperature.

Yes, it is, but I suggest removing it, because the low-temperature cooking method does not make the rind crispy.

Giulia Basso
Director of our Magazine