New year, new cheese, new combination. Although Rascard is a young cheese, both of age and of discovery, it is already carving out its space in the world of washed rinds.

The creator in this case is Nicoletta, who is not a producer but rather an affineur in Aosta Valley. The role of affineur in France is well defined and consolidated while in Italy we are still in process of developing and spreading the awareness about the importance of the ability to “age” the cheese.
One of the critical factors that influences the taste of this cheese is the hands of those who refine it. Of course, the quality of the milk is fundamental as it is like the working process as well, but try to think only how the same wheel can change significantly in terms of flavors and textures depending on its management during the “aging” and then fermentation.

Interestingly, the need to tame the “wild” taste profiles of a milk led Nicoletta to discover this cheese. Rascard looks like a Fontina, but the taste is much more similar to Montagnard cheese. These are the main characteristics of Rascard: raw milk, uncooked pressed curd, washed rind and no preservatives or additives.
In particular, Rascard is produced with fresh milk from cows fed with mountain pasture which gives the cheese sweetness and notes of cooked butter. All these characteristics makes it more delicate than a Fontina. The selected ferments give to the cheese the typical herbaceous note, and as last the washing of the rind results in an aroma of cellar and yeast.

Actually, the name Rascard refers to the typical constructions of the Val d’Ayas and Valle del Lys areas. These buildings were historically used for the conservation of cereals and meant to avoid formation of humidity or protect from attacks of rodents. 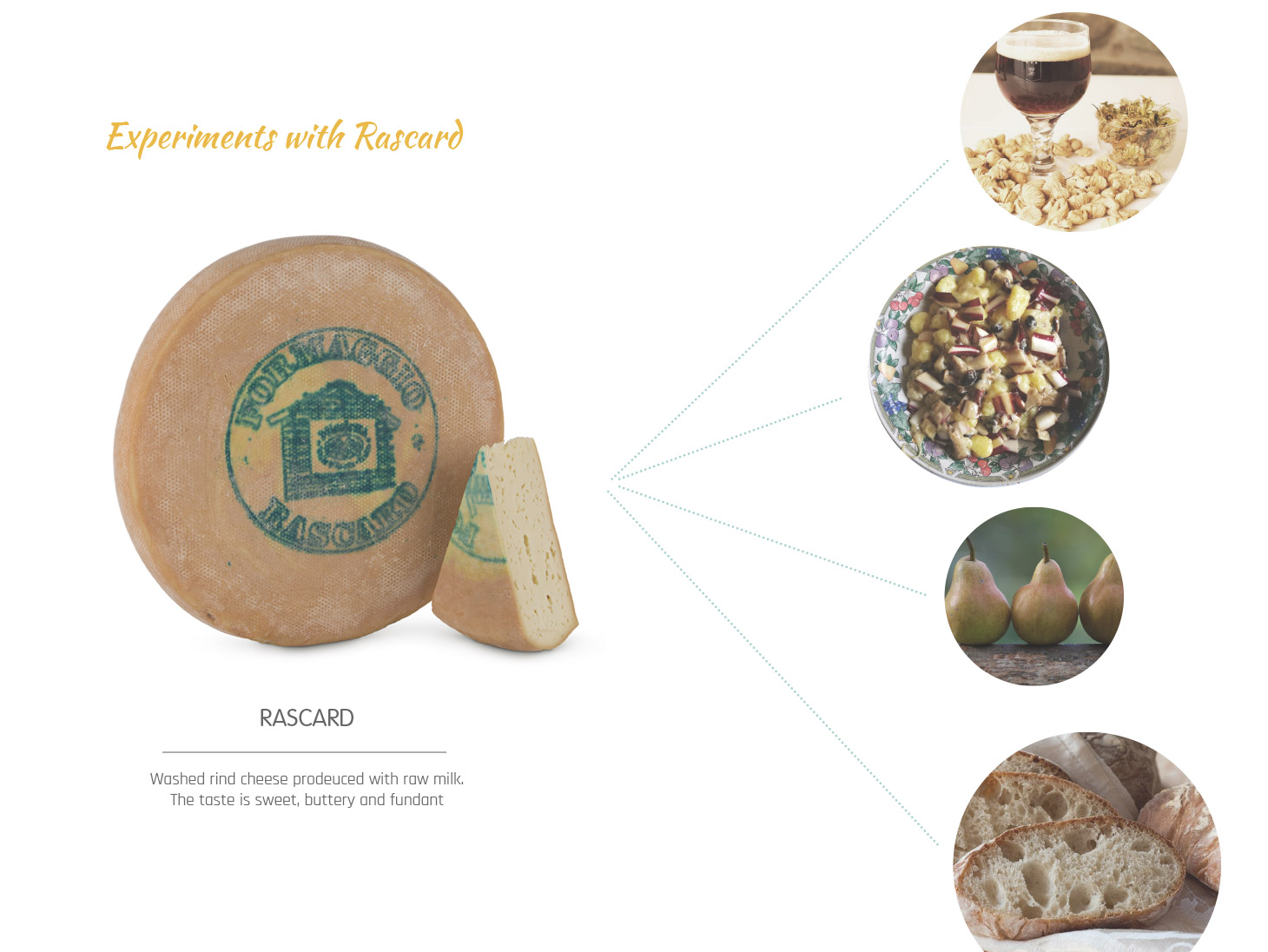 Into the glass
Ok, the Rascard is sweet and rather floral, but do not be too soft with the pairing: it is still a intense cheese with its own personality. I would advise you to combine it with a drink with “warm” notes like a dark beer which has a good body and winter floral aftertaste like that of pine needles, resin or chestnut. If I were a wine instead, and wanted to enjoy the company of this cheese I’d probably not give it to him an easy win on a taste challenge, so I’d be a nice strong red, maybe with notes of barrique, maybe from the South such as Etna area.

Into the plate
Thanks to Rascard’s elastic paste it becomes malleable in use, but I suggest to exploit its ability to melt easily by for example, including it in a fondue mix, or adding it to polenta, but also suitable to use for stuffing of roasts. Personally, I tried it with gnocchi, softening the cheese with a little bit of milk, adding little mushrooms and finally, then straight out of the fire a few leaves of raw radicchio from Treviso... powerful.

From the field
With the intention of creating a direct pairing, simple, but effective, in this selection I want to aim for a single matching element, in this case a fruit. I chose a fruit from the Valle d’Aosta, the Martin sec pear, playing a little with the contrast between consistency and flavors. The elastic and floral with herbaceous notes the Rascard against the crunchy and sweet with acidulous note characteristics from this pear.

One more tip
For me, bread is fundamental. Bread should always be on the table and I can talk about it for so long to the point that becomes almost boring. I like to think that there is a combination of bread for each type of cheese/charcuterie, depending on different textures and aromas. For instance in Tuscany bread is typically made without salt because a good quantity of salt is used to age meats or pecorini. In the Divine Comedy, Dante after been announced his future exile, the anguish he would have felt has been expressed like this: “Thou shalt prove how salt the savour is of other’s bread...”

In detail, the Tuscan bread called “sciapo” is a soft wheat bread type “0” characterized not only by the absence of salt, but also by the slight acidity of the dough. Combining it with the Rascard I could not resist to cut the cheese into thin slices, lay them on a slice of warm Tuscan bread with some freshly grounded pepper on top... And why Tuscan bread? Because they match perfectly like a stressful day and a glass of wine.