A maturing process that takes place at almost one thousand meters above sea... 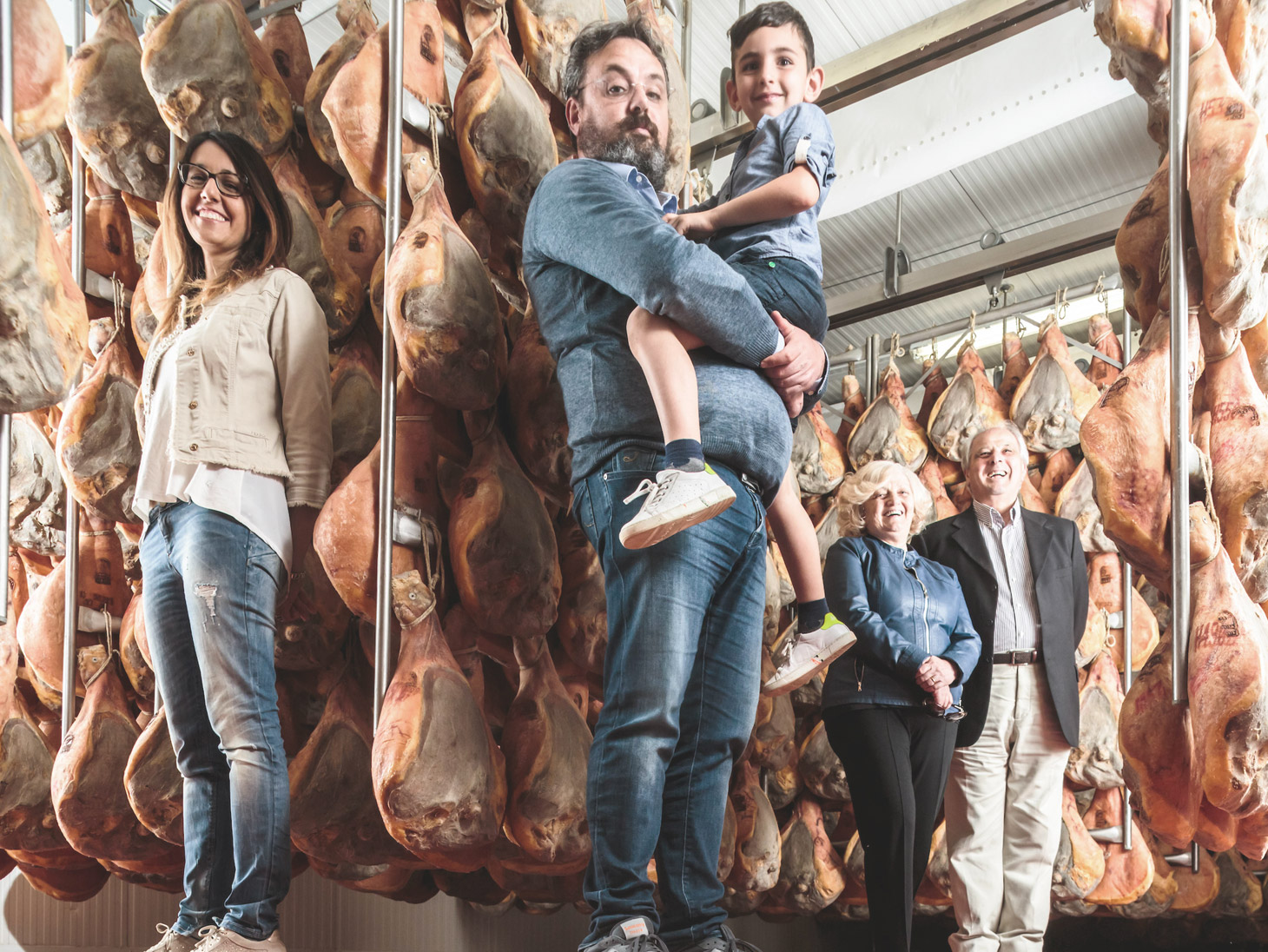 A maturing process that takes place at almost one thousand meters above sea level, using cutting-edge technologies that allow hams to take in the magical mountain air, yet adjusting the temperature and humidity according to the needs of the various processing phases. This is one of the main secrets of the quality behind the Poggio San Giorgio company’s products. A company which, from the small village of Agriano, situated amongst meadows and nature, defends the ancient traditions of Norcia’s pig processing and preservation.

The location is found on the plateau that divides Cascia from Norcia: here, the high peaks of the Apennines avoid the flow of humid air from the sea, creating perfect climatic conditions for producing hams and sausages of the highest quality and with unique features, including the famous Prosciutto di Norcia, a PGI (Protected Geographic Indication) certified brand since 1998. We had a word about this with Alessandro Perticoni who, since 2004, has been running the company founded by his father Daniele in the mid-seventies: Poggio San Giorgio is one of the ten producers of Prosciutto di Norcia IGP consortium and through Alessandro’s detailed explanation of all the ham’s processing stages, from the leg to the finished product, we can really understand why the name “norcino” originated precisely from that area. At Poggio San Giorgio salting and ageing, Alessandro tells us, are carried out by hand and technology simply helps in carrying on the tradition: seasoning takes advantage of the extraordinary climatic conditions offered by the surrounding environment.

Alessandro, when was the Poggio San Giorgio company established?
It was established in 1975. The company was initially founded in Assisi as a family business by my father Daniele, who started marketing hams. In the 80s he began to buy fresh raw material that was seasoned for processing and he specialised in maturing the meat, until he managed to buy the Agriano plant at the end of the 90s, where we still operate today. I had finished studying and between 2000 and 2004 we renovated the plant and started production; we stopped working for third parties and starting to make our own hams autonomously.

Why did you choose to move from Assisi to Agriano?
Our residence is in Assisi, but my father and mother met and got engaged here in Norcia, so they have always been affectionately linked to this area. My father began his activity in Assisi, but he welcomed the possibility of taking over a factory in Agriano, and in the meantime, during the 90s, the PGI ham certification from the Norcia area was introduced. So we made an investment to make the ham factory operational and moved the processing to this area.

How is the company structured today and how many pork legs are processed on average each week?
Today we have about ten employees, most of which are employed in production, and we work about one thousand hams per week. Currently we are expanding the warehouse to be able to accommodate for even longer aging periods.

Why do you season your hams for longer periods?
Even if the disciplinary specifications only impose a minimum 12-month parameter, the market needs have changed and the consumer wants an increasingly sweet product. The sweetness is given precisely by aging: today, unlike the past, it’s not unusual to sell hams aged for 18-20 months. 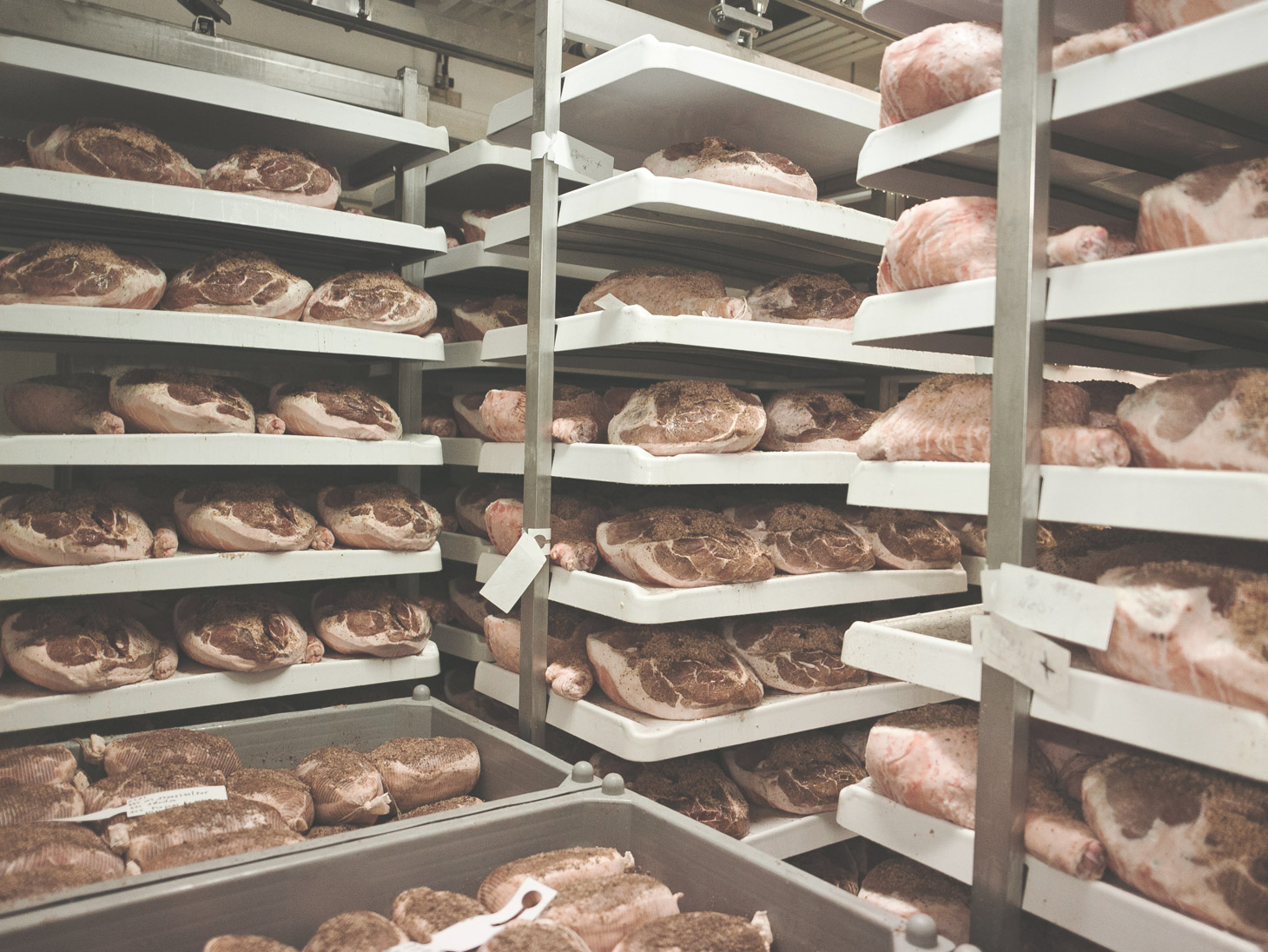 Where do you buy the meat that you eventually process?
All the meat is Italian. Certain products, such as the Peduccio, we buy directly here in Umbria. For others, however, they come mainly from northern Italy, often from the same production areas of Parma and San Daniele: Parma, Reggio Emilia, Mantua, and Cremona. We choose suppliers by carrying out careful quality checks, both when they leave their original location and when they’re delivered to us.

What are the characteristics of the Norcia ham?
Norcia ham is distinguished from Parma or San Daniele ham because in addition to salt it is also flavoured with garlic and pepper. With regard to other cured meats, the Umbrian tradition also requires wine, which is not foreseen in the Norcia ham disciplinary. The historical recipe prescribes crushing the garlic in the mortar along with the wine, then adding the salt.

What is the first step for a quality product?
The first and most important phase is meat reception and quality control. When we receive the meat we verify the temperature and carry out visual checks on the appearance, and we check the Ph level, which is a very important factor for seasoning: it must be between 5.7 and 5.9. Visually, the thigh should neither be too fat nor too thin, it should be uniform and with the “right” rind, without veins and without bruises. After this careful examination, the product is trimmed, so as to give it the Norcia ham’s classic “pear” aspect: we take the skin away abundantly, up next to the feet, as opposed to that of a San Daniele or a Parma ham. This makes it easier to lose moisture, giving it a drier appearance. Then we move on to the initial salting phase, with a mixture of salt, garlic and pepper. After six days, it’s time for the second salting phase: the salt initially placed six days previously is removed and now only white salt is used, without flavourings, to get a balanced taste that is enhanced by seasoning.

How is the ham prepared for seasoning?
Through the resting phase: the salt is removed from the ham via a “blowing” process and the ham is then hung in a cold cell where it stays for about 90 days. This procedure means that the salt, which in the first stages of salting has penetrated only a few centimetres, can be evenly distributed throughout the entire leg. The ham is then washed, to remove the remaining residues of salt, dried and placed in a cell which, in 36-48 hours, eliminates further traces of water. We then move on to the seasoning phase.

How does seasoning take place and why is it important?
During the seasoning phase, the ham acquires its unique flavour: this is why it‘s so important. The first phase lasts three months, then from the 170th to the 190th day the ham undergoes the ‘sugnatura’ processing: basically the lean part is covered with a layer of fat, which serves to soften it externally and allow the residual moisture to escape. Thus the final phase, which lasts at least six months: the ham is placed in a cell at a temperature ranging between 17 and 19 degrees and at a humidity ranging between 70-75%. Our hams absorb mountain air, because we have a system that takes the air from the outside, regulates its temperature and humidity, and places it in the cells. On the twelfth month the ham is checked by the Consortium inspectors and if adequate it is properly marked with the PGI brand. Then it continues aging up to 16-18 or even 20 months, depending on the product: the long aging is suitable for larger legs with a greater amount of fat. 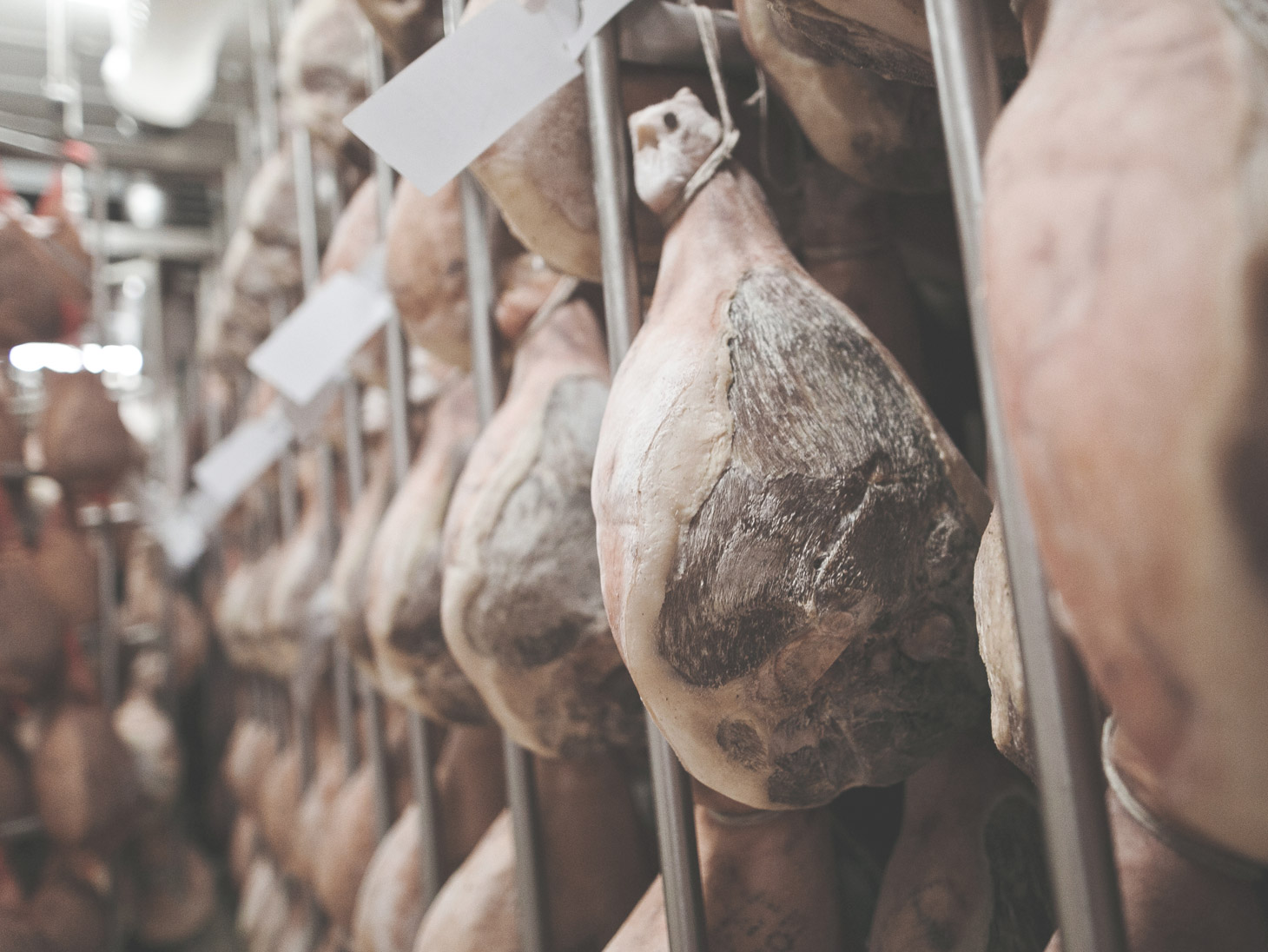