A guided tour in a Dehesa in Villanueva de Cordoba, during the Montanera seas...

A guided tour in a Dehesa in Villanueva de Cordoba, during the Montanera season, to find out the roots of excellence of Jamón Ibérico de Bellota, starting from the breeding
⏱ 4 MINUTES READING

“Ale what are we going to do? Shall we leave anyway or is it better to postpone the trip?”
“Let’s go!”

It is the evening of January 11th, the next day at 6.45 am we are supposted to take a flight from Venice to Madrid. The last days in our company have been a disaster of contagions and quarantines, we are in the midst of the fourth wave. I am anxious about leaving the company in a difficult moment, also because we need to take a Covid test in Madrid before returning, with the risk of being stranded in Spain.On the other hand, it is a unique opportunity, planned for some time: a Dehesas’ tour during the Montanera season, to experience the breeding of the Iberian pig. Alessandro relieves me of my conscience crisis and at 5.30 he picks me up together with Enrico, destination Madrid!

It is the first international trip after many months, finally some oxygen. We arrive in Madrid early and have a couple of free hours to take a walk in the historic center, waiting to meet Ulla Kruse - export manager by Monte Nevado - in Atocha, the central station, where we take a train together towards Villanueva de Cordoba, in the Los Pedroches province, South of Spain.

Here, with a minibus, we arrive finally at the Dehesa del Rey, literally “the king’s pasture”, the first of the three breeding estates, partner of Monte Nevado, that we are going to visit during the day. José Manuel Jimenez, responsible for the selection of Iberian pigs, is our guide during the visit. He is responsible for selecting the pigs “ready for sacrifice”, daily visiting the different estates with which Monte Nevado collaborates, also to verify that the agreed breeding standards are respected. 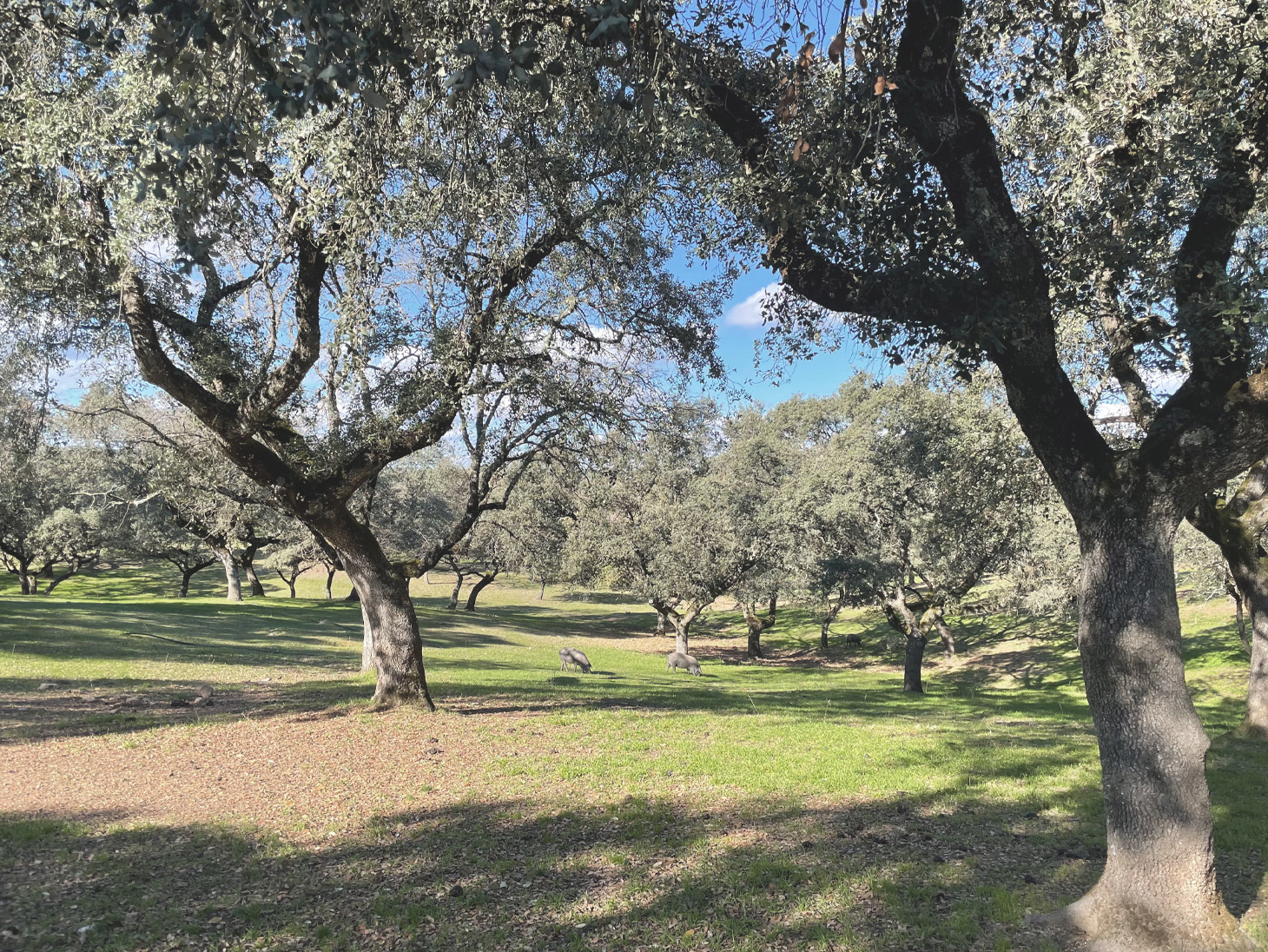 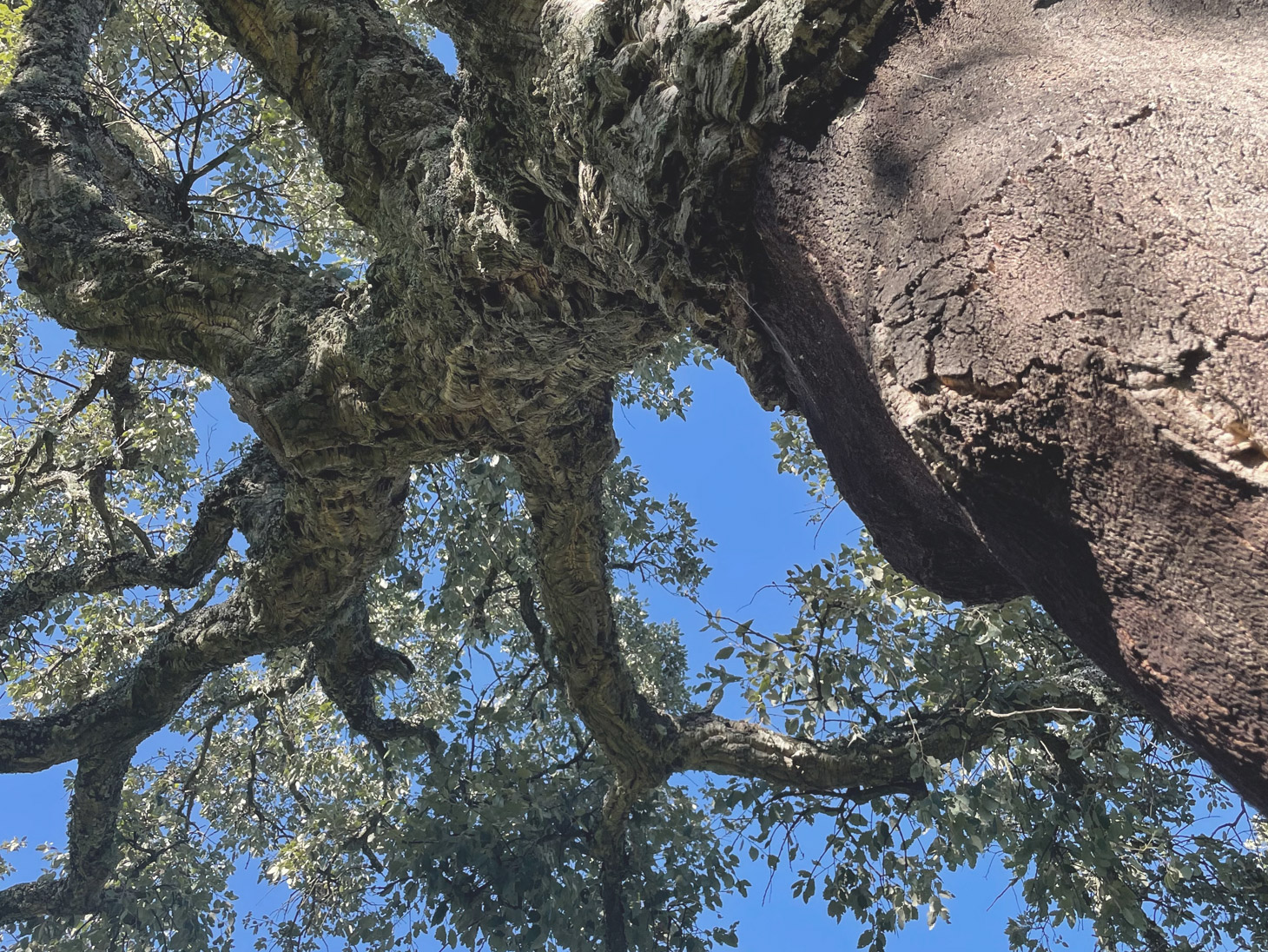 We enter the Dehesa del Rey: 120 hectares of forest for 65 pigs. I can’t believe it: each pig has 2 hectares of pasture at its disposal, in a wonderful place.

We enjoy an amazing walk trough the estate, among different types of oaks: la Encina (holm oak), which has a perennial leaf and very palatable acorns with a high content of oleic acid; el Alcornoque, the cork oak, still with perennial leaves, whose acorns ripen later than the holm oak, giving the possibility of extending the Montanera; el Quejico y el Rovere (Gallic oak and oak) which have deciduous leaves and early acorns, slightly bitter, which pigs eat at the beginning of Montanera, when they have no alternatives.

We follow José, who begins to call the pigs making a curious sound - which Enrico tries to learn and experience immediately - and from the most distant oaks we see them arriving, trotting in small groups. “They are used to man - explains José - because Montanera is made up of three elements that complement each other: the dehesa, the Iberian cerdo and the porquero”.

The porquero is the breeder, the one who takes care of the pigs raised in the pasture, recognizes them one by one, calls them by name, pampers them. They are incredibly sociable and curious; at first they approach us with caution, but then, once proved that we are not dangerous, they follow us on our walk, looking at what we do. They are also very snappy, despite their size and weight.

“Pigs live into the wild and walk about 15 km a day, they are free to move and feed freely. Each pig eats about 12 kg of acorns per day and 1 to 3 kg of grass, this is why each head has 2 hectares of pasture at its disposal, because the diet is completely natural, without additions“. 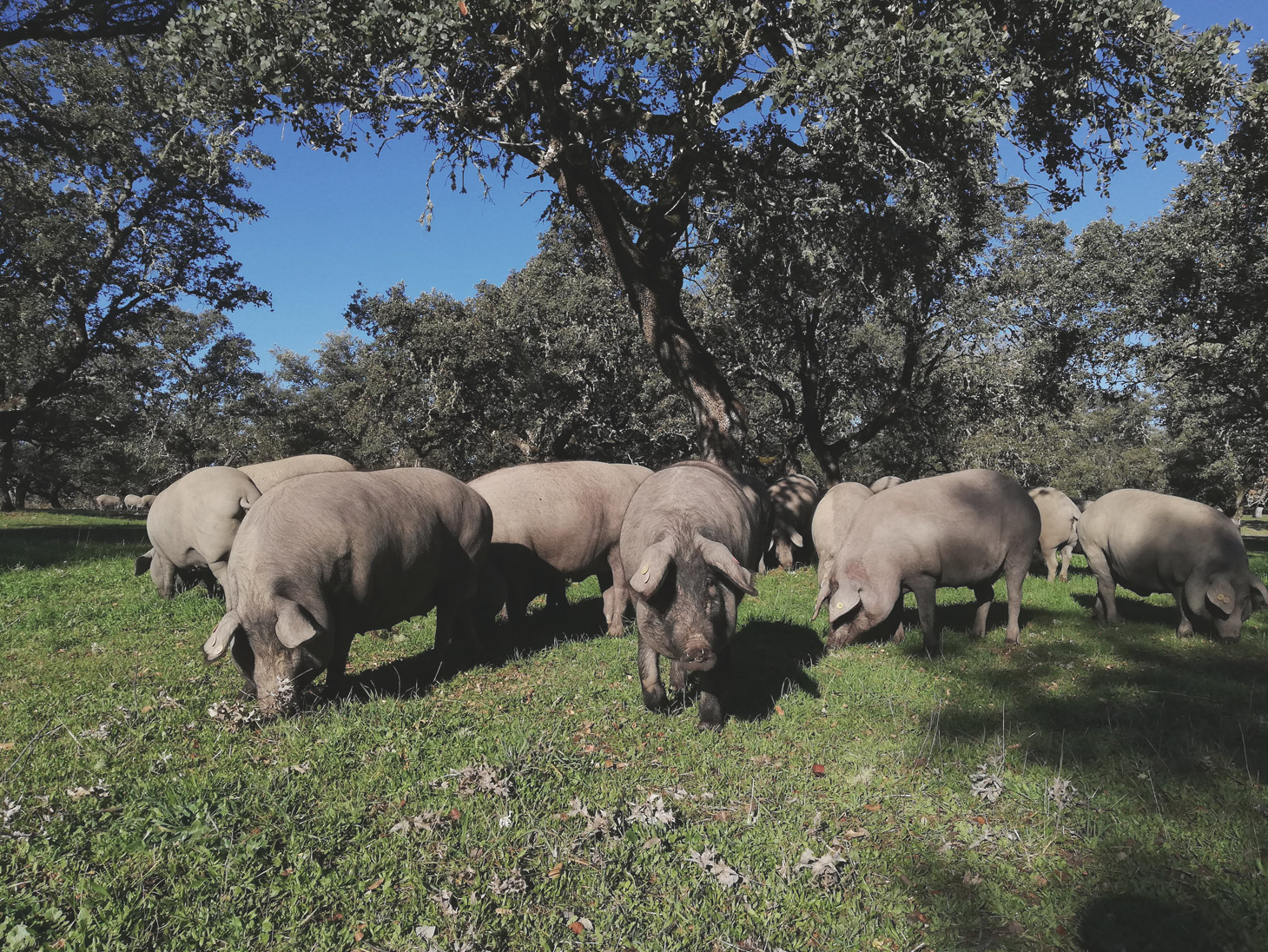 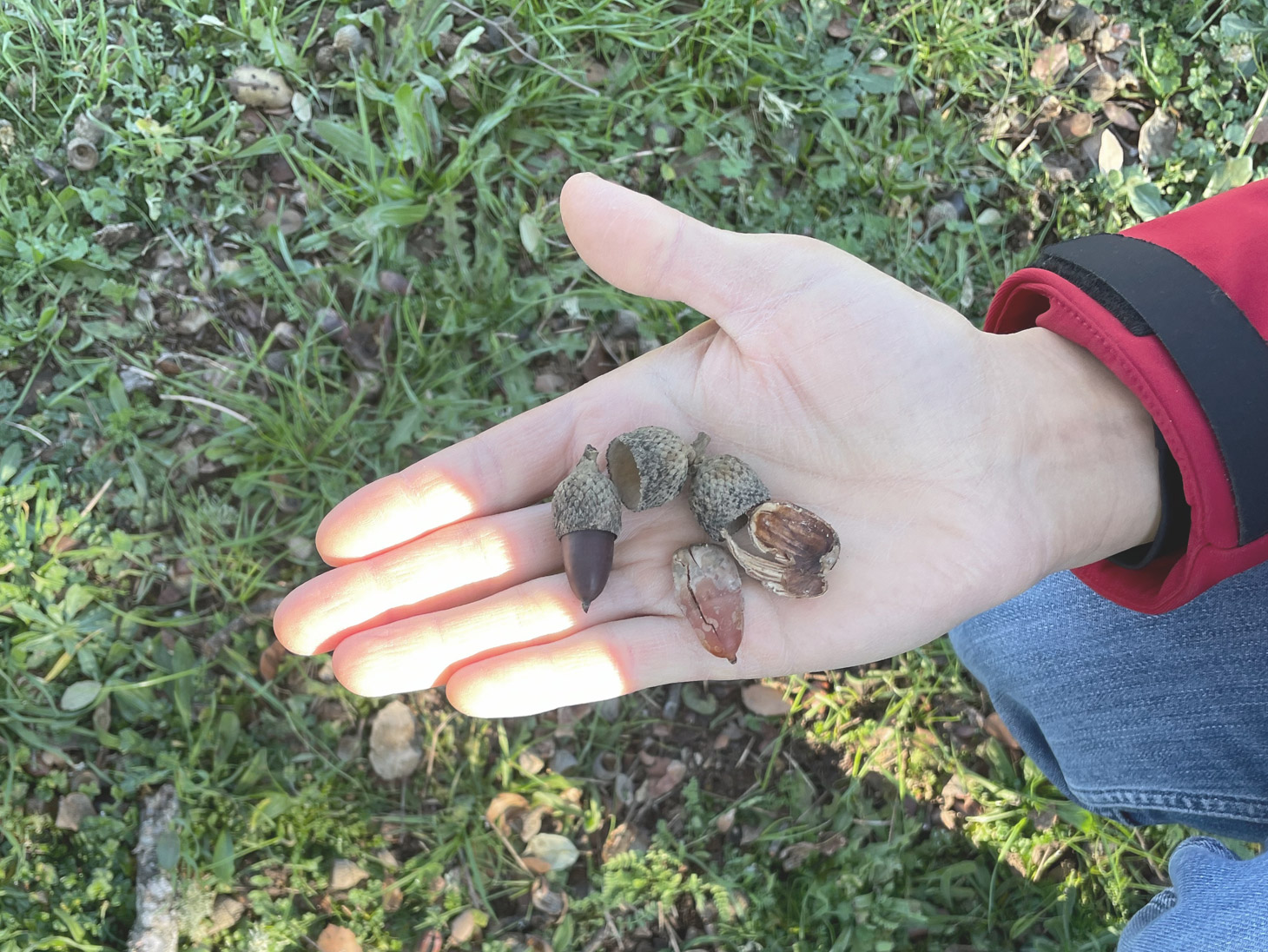 There are four stages in the breeding of the cerdo ibérico. Lechon, a suckling pig: up to 3 months old it is raised in a paddock with its mother; marrano, between 4 and 9 months: at the end of Montanera the smaller pigs take the place of those that have been slaughtered in the dehesa and begin the grazing season; from now on the pigs will always live free, fed with the remaining acorns, grass and cereals; primal, between 10 and 15 months, feed mainly on grass and stubble during the spring-summer, until autumn, when the Montanera begins: from October to March, for 4-5 months, the gordo pig only eats grass and acorns, up to a weight of 180 kg.

The excellence of Jamón Ibérico de Bellota is linked not only to the diet but also to the breed of the animal, 100% Iberian, and to the specific characteristics of its meat, in particular the relative proportion of fat and its distribution within the muscle of the animal.

The most bred varieties of 100% Iberian pigs are four: Retinto, Entrepelado, Lampino, Torbiscal. José prefers the Retinto, these are in fact the pigs that we find in the Dehesa del Rey: medium size, dark in colour with little hair, well proportioned, with long and thin legs and with the characteristic black hoof, hence the name pata negra.
The speed with which they eat acorns is fantastic and, be careful: they peel them! They just eat the fruit and spit out the shell! 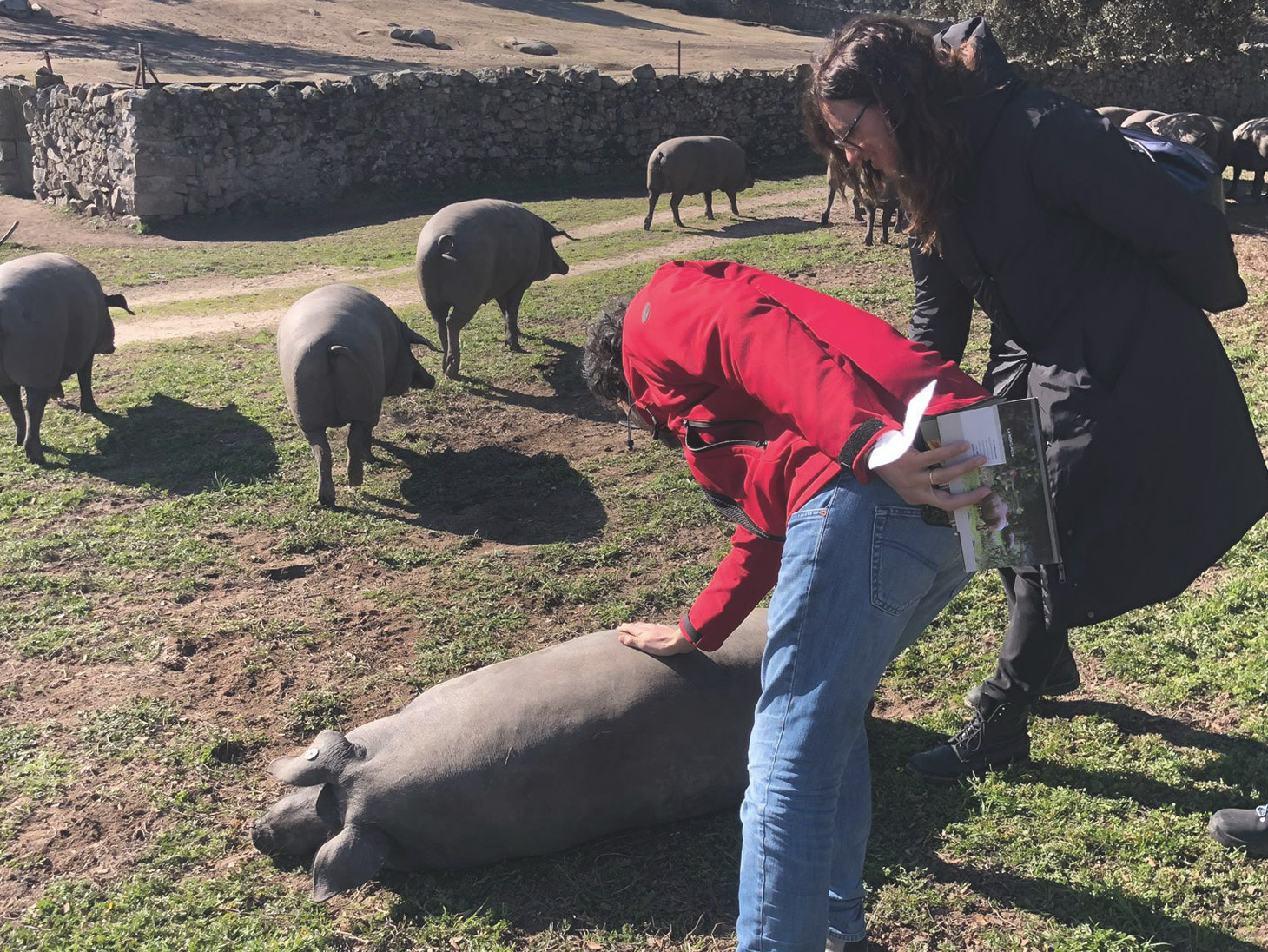 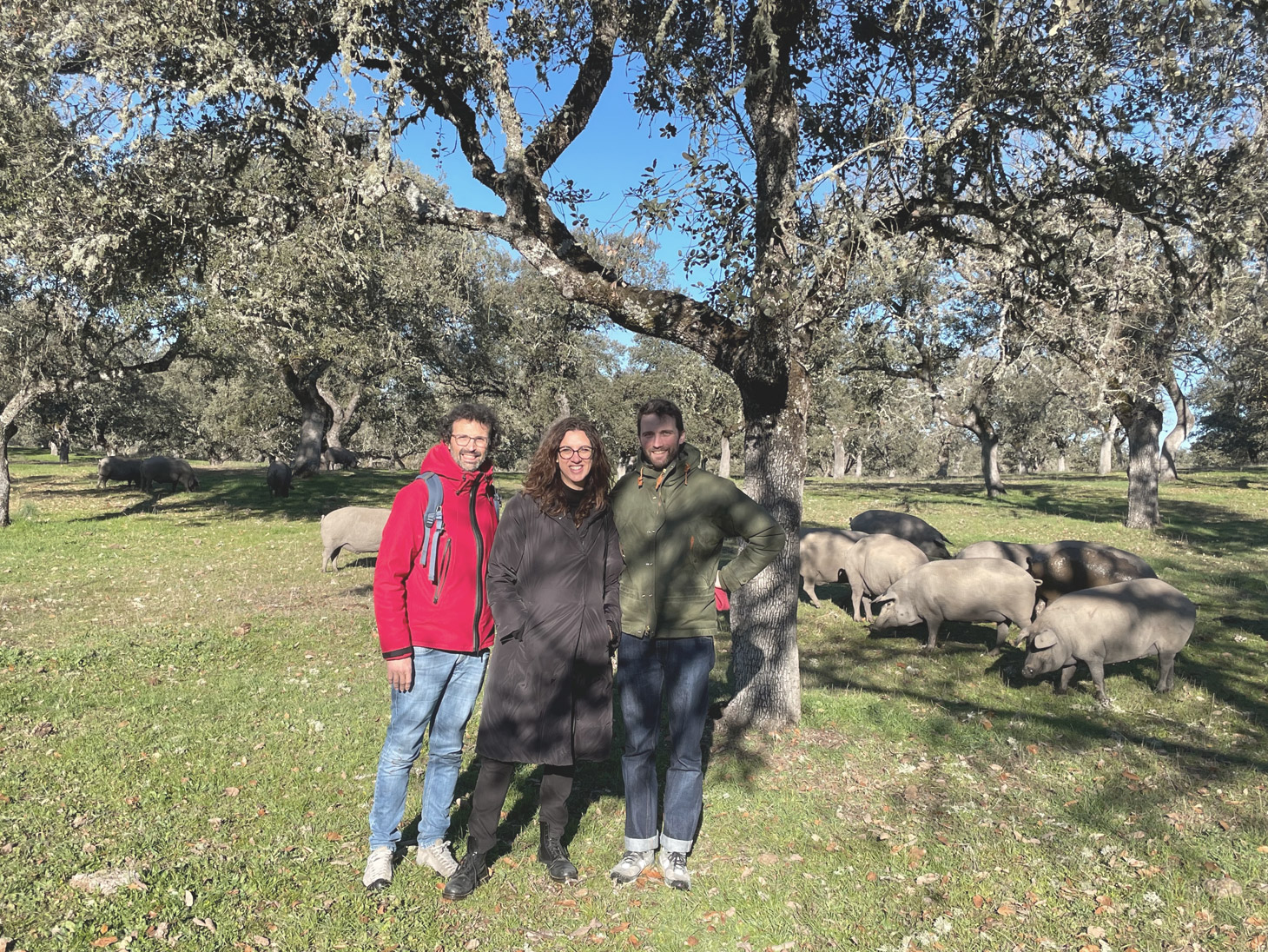 We move to another Dehesa, Enebrillo, where we have the opportunity to understand how the whole breeding cycle of Iberian pigs works. Here, in fact, we also see a small group of suckling pigs and marrano, which live in large paddock and are periodically sent to pasture. We witness the “playtime” of the little ones: when José opens the fence and calls them, they all run among the oaks to roll on the grass and chase each other. They are really cute!

But another nice surprise awaits us here: a table set among the oaks and a cortador who opens for us an Jamón Ibérico 100% Bellota matured for 48 months, and also teach us how to cut it. Sweet and intense, pleasantly tenacious to the bite but perfectly soluble, with notes of dried fruit and hazelnuts.
We discover that Monte Nevado has chosen to offer its Jamón Ibérico 100% Bellota only with at least 42 months of seasoning: lower agings are not available, because only after this long period the ham reach its best expression. We also discover that their Pata Negra does not contain preservatives, unlike many other Jamones Ibéricos, and that is available also in a boneless version and in smart pre-sliced trays, a service proposal that seems very interesting to us. 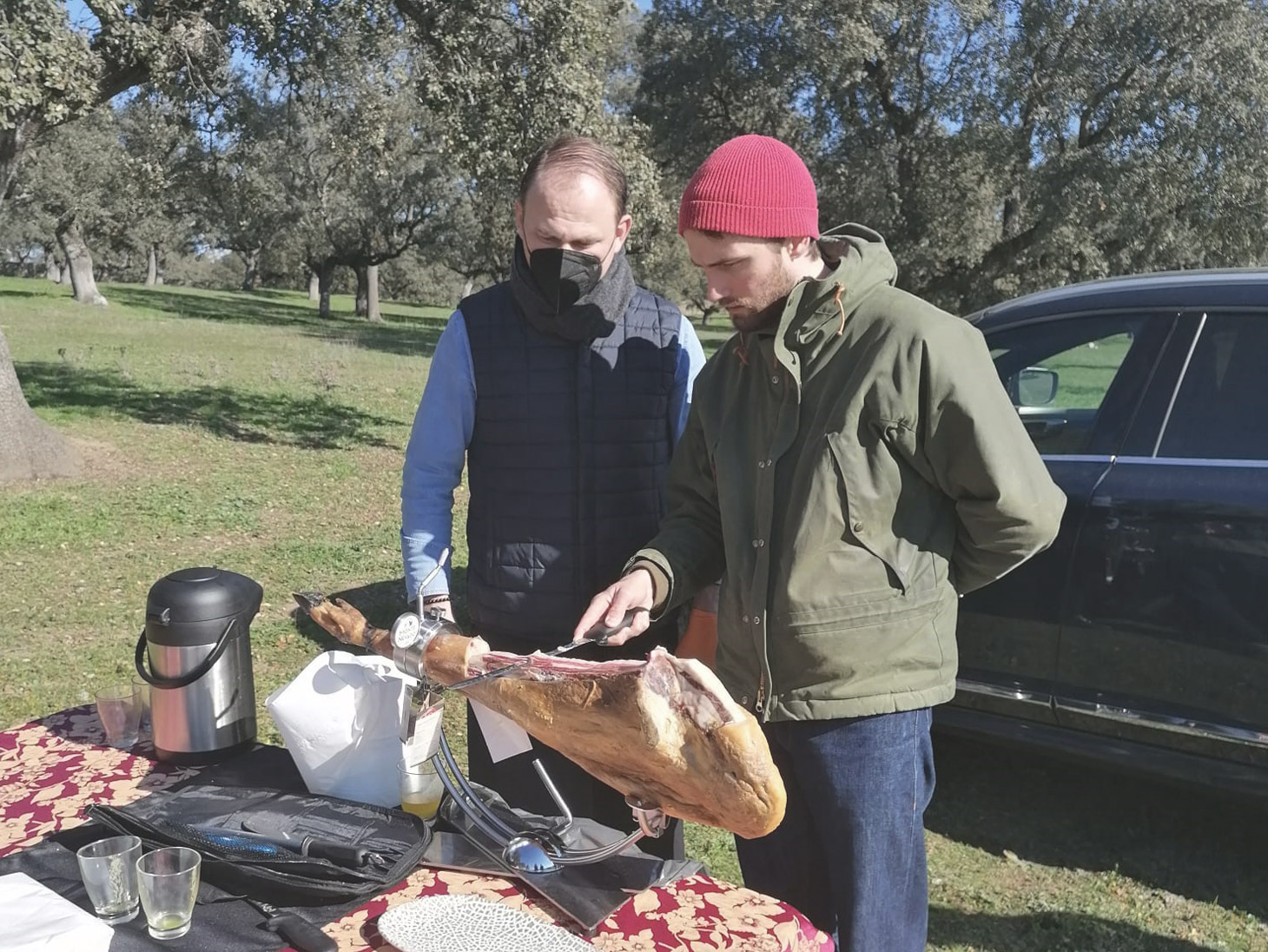 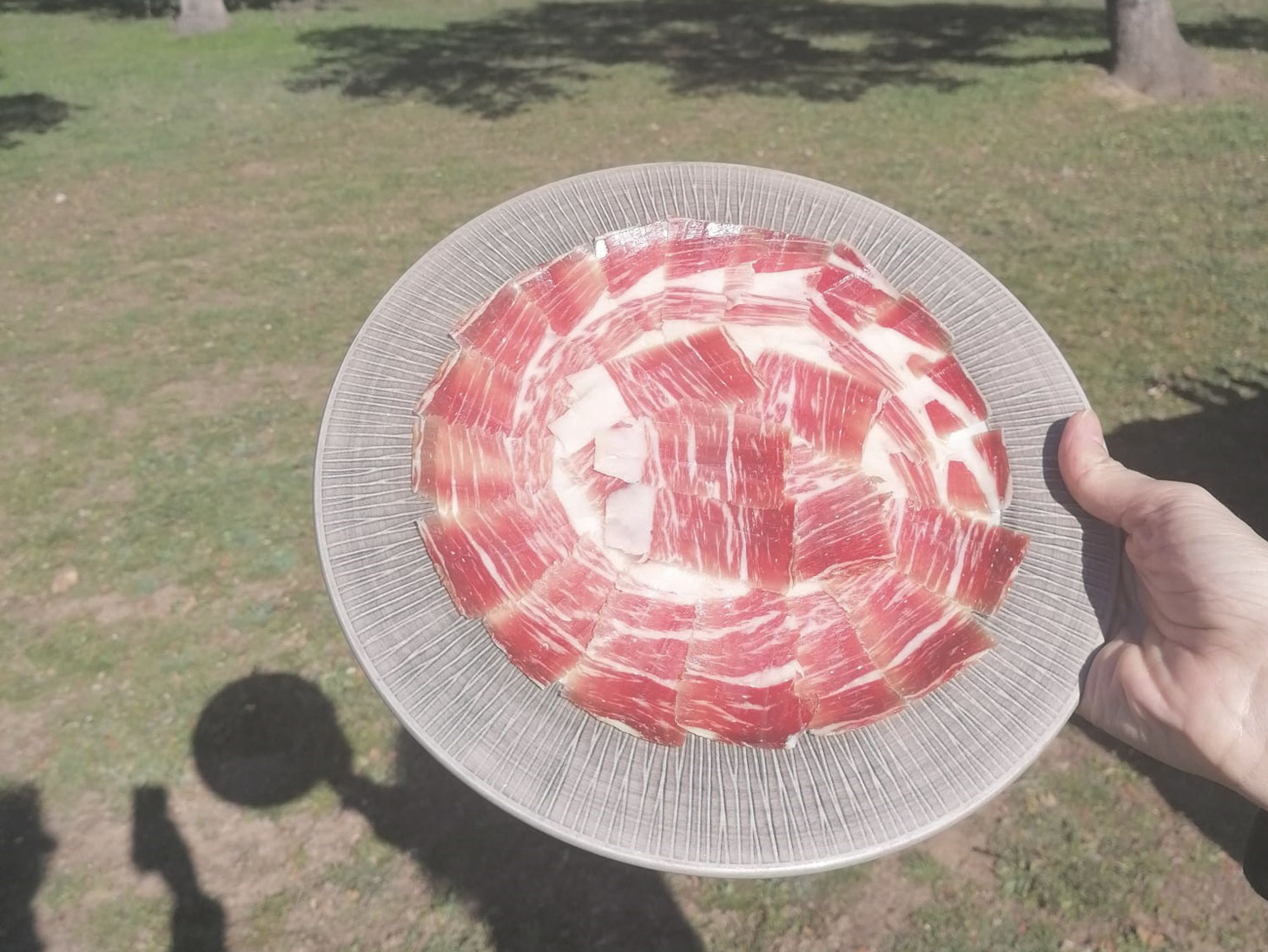 We really appreciated the approach of Monte Nevado to breeding: attention to animal welfare, quality of nutrition and breeding, environmental sustainability, which translates into excellent quality raw materials, enhanced by an obsessive care in maturing. We decide to expand our range and add to Serrano and Mangalica an Jamón Ibérico 100% Bellota, with bone, deboned and pre-sliced, but also a Paleta 100% Ibérico de Cebo de Campo.

The difference between Jamón Ibérico de Bellota (black label) and de Cebo de Campo (green label) lies in the diet: during the Montanera the latter is still fed in the pasture, in freedom, but the grass-based diet comes in part integrated with feed made with cereals and legumes (see chart).

After a walk in the last Dehesa, Cerro Caldito, we take the train back to Madrid, where the Covid test is waiting for us. Fortunately it is negative, so we can go home. It was an amazing journey, that let us deeply understand the roots of excellence of the most famous ham in the world.