A real gentleman, in love with his land and his work. A person that kindly ... 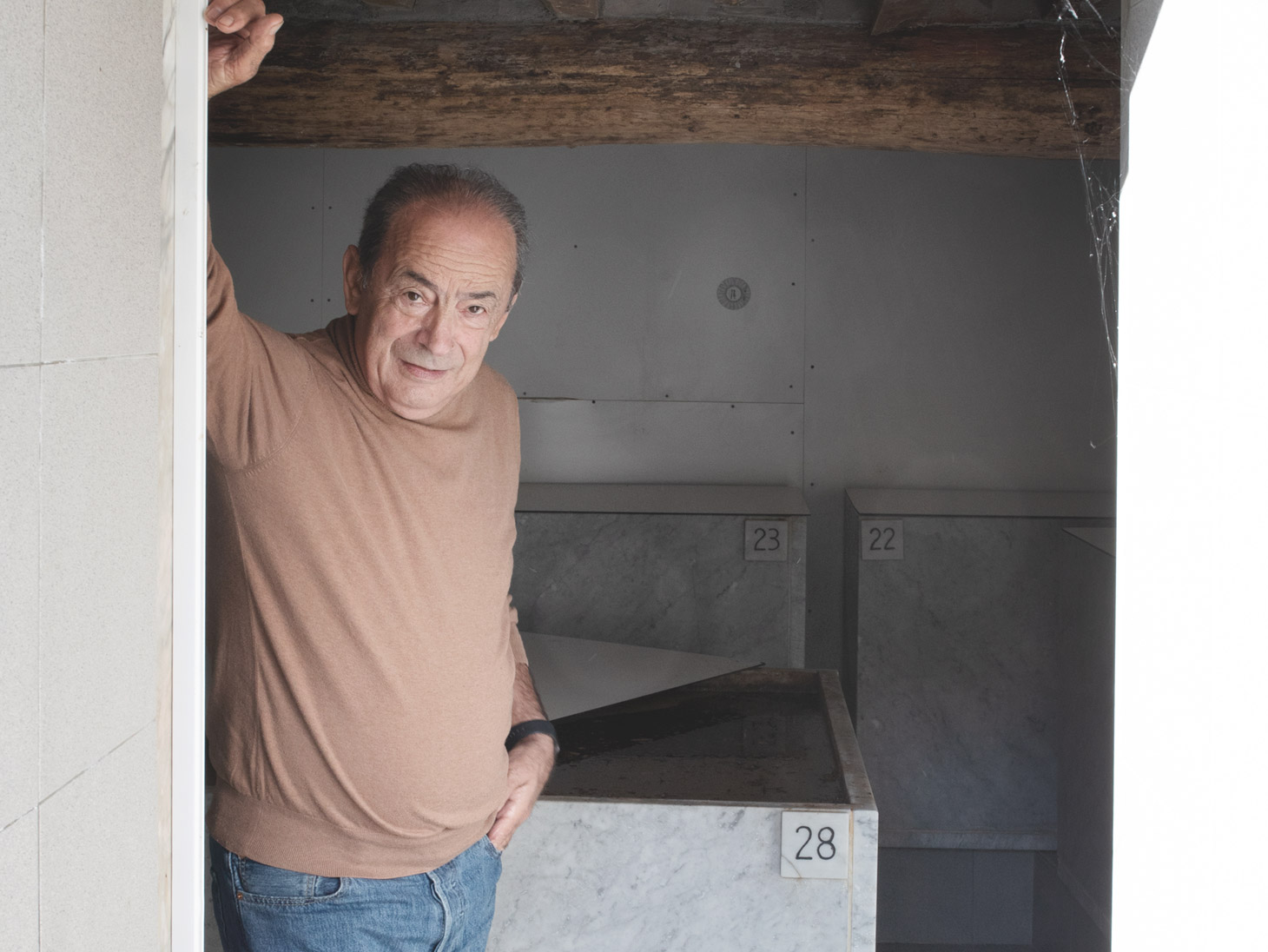 A real gentleman, in love with his land and his work. A person that kindly pushes you out of your comfort zone, with sharp questions that make you think. But also smile

Without filters. Marino Giannarelli is a person who always says what he thinks, with no exceptions.

Either you hate him, or you love him, but he doesn’t seem to worry about this. He is convinced of his choices, in love with the place where he lives and a master in his job.

You like him? Good! You don’t like him? No problem, goodbye. I met Marino for the first time more than twenty years ago: we had organized a visit to Giannarelli with all our sales people; I was still at the University and only helping out in Valsana on Saturdays.

But I took the opportunity to organize a weekend in Tuscany on the motorbike with my boyfriend of the time, joining the others in Colonnata. Good times.

At first Marino really put me in awe: so sure of himself, so clear in his opinions. Today I meet him again with pleasure, after many occasions we have got to know each other over the years, in fairs and various events. We reach the company headquarters in the “street Comunale di Colonnata”: one of the two production laboratories owned.

The place is awesome: a natural amphitheater formed by the marble mountains of the Colonnata basin embraces the laboratory, right on the winding road that climbs to the town of Colonnata, crossing a wood of centuries-old chestnut trees.

“Luca has always worked in production; after graduating in Pharmaceutical Technical Chemistry, Alessia got in charge of Quality, while my sister Anna takes care of the administration and her husband of purchases, but also of logistics and sometimes helps us in production. We all help each others, as happens in a family company“ 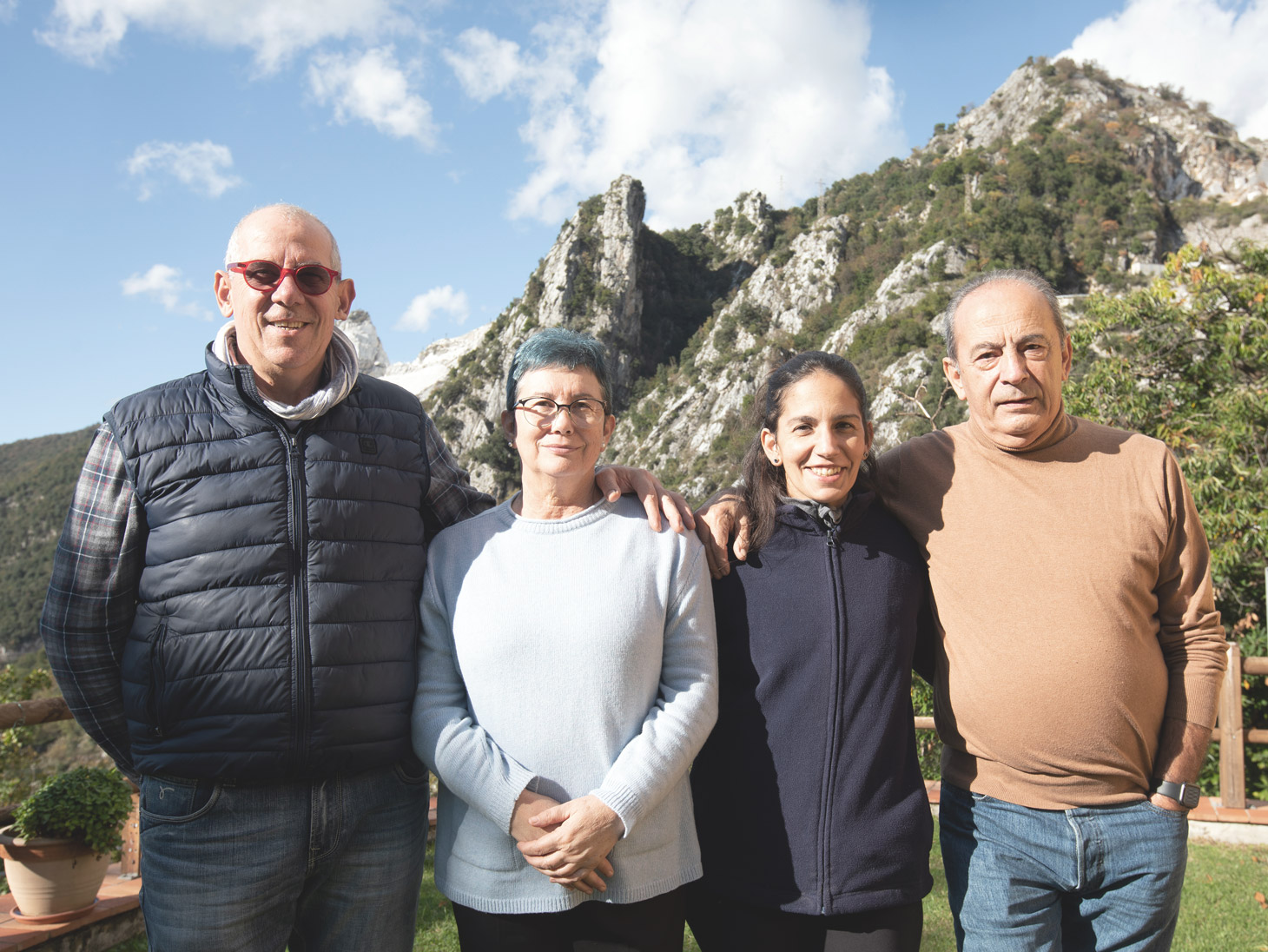 “I always thank my father Nestore for moving here from Sassalbo, in Lunigiana, where we used to live when I was a boy (my grandfather was a charcoal burner). We moved nearby, in Bedizzano, north of Carrara city, inside the marm slope of Colonnata, in 1953 and my father opened his butchery. He produced charcuterie and, most of all, lard, the main meal of the marble workers of those villages“

There is a very strong bond between the lard, the territory, the marble and marble extraction workers.

A piece of bread, a bite of lard and a bottle of water constituted a light, but nutrient meal to bring upon the mountains.

Lard is coming from a poor cut and has a highly caloric profile: the perfect meal for marble extractors since Roman Empire.

A legend says that it has been invented by a marble worker putting few pieces of lard, salt and spices in a marble case.

There is also a strong bond between Colonnata people and marble cases, that has been always part of houses’ furniture in this area and has always been used, almost in every family, to preserve lard. Marble cases are obtained from the Canaloni area, a little valley behind Colonnata.

The marble of this area has a superior glaze content compared to the rest, that permits the lard to “breathe” during the maturation; moreover it is naturally shining and doesn’t need any chemical treatment.

Thanks to this property of marble, natural humidity is created inside the marble tanks, and therefore a brine that allows the lard to mature.

One layer of lard and one of salt, herbs and spices, “like a lasagna”.

Giannarelli uses coarse Sicilian sea salt - they put in each marble tank about 300 kg of lard and 110-120 kg of salt - Italian garlic, rosemary and a mix of spices, whose recipe is jealously guarded by every family. Curious to know that the spices used are an heritage of Greeks scalpels, that Romans invited in Tuscany to teach them the art of marble cutting. These people used to season their meal with those spices to feel like at home.

After the visit to the laboratory and a delicious lunch with the family charcurterie, Marino took us for a small tour of the marble basins.

We went to the Fantiscritti quarries, the heart of the Carrarese marble quarries.

We follow the route of the former Marble Railway, passing over the Vara bridges and inside the suggestive tunnels dug into the rock, to discover the quarries, from which white Carrara marble was extracted already in pre-Romanesque times.

There are more than a hundred quarries around here, but they are no longer all “cultivated” - Marino told us.

From the imperial age up to the mid-twentieth century, when the first roads were built, the blocks were transported downstream with the “lizzatura” method: the marble arrived at the port of Luni along the Via Carraia on ox-drawn carts.

But it was Michelangelo who created the myth of the Apuan quarries, right from his first trip to Carrara, in the autumn of 1497 and in subsequent trips, where he personally went to choose the marbles that would give life to his masterpieces

It’s told, among other things, that Buonarroti was a great admirer of Lardo di Colonnata and that, during his travels to Carrara, he made huge binge of it.

We stopped in a small square on the slopes of Monte Croce, just above the hamlet of Miseglia. Here two historic nineteenth-century bridges (1890) of the Marble Railway meet - one of the most admired achievements of railway engineering of the last century for the transport of marbles downstream - which connected the three marble basins of Torano, Miseglia and Colonnata through a daring series of viaducts, bridges and tunnels.

The view of the Ponti di Vara and the quarries is truly impressive, as is crossing Monte Croce in the tunnel carved into the rock.

We reached the village of Colonnata, a hamlet of Carrara, inhabited by 300 souls, where the road ends. Marino took us to Via Giardino 35, a place that has entered the history of gastronomy, because here, in the laboratory of the Giannarelli family, Carlin Petrini founded the first Slow Food Presidium in November 1999

The European Community wanted to impose the use of aluminum tubs instead of marble basins for hygienic reasons.

Slow Food opposed it and Lardo di Colonnata became the first Slow Food Presidium, saving tradition; today it is no longer a Presidium, but is still part of the Slow Food Ark of Taste.

Here, in via Giardino, the Giannarelli family has purchased over the years several portions of a historic building from 1909, converted into a laboratory respecting the original architecture.

And here, marble tanks at a natural temperature, without forced refrigeration.

This is something that makes me smile: Marino - who, with the intuition that has always distinguished him, in 1996 had registered the “Lardo di Colonnata” trademark - now can no longer use this name for the lard produced in his laboratory in Via Comunale, but only for Lard produced - in exactly the same way and with the same raw material - in the hamlet of Colonnata, in the laboratory of Via Giardino.

In 2002 Lardo di Colonnata acquired the Protected Geographical Indication, whose disciplinary says that it can be produced exclusively in Colonnata, a hilly mountain hamlet in the municipality of Carrara.

Despite the request of some producers in neighboring villages to be included in the PGI, a 2005 ruling put an end to the “lard war”, assigning the PGI exclusively to Lard produced in the hamlet of Colonnata.

The raw material is the same: lard obtained from white pigs weighing more than 250 kg born, raised and slaughtered in Italy, in the Po Valley.

The cuts are personally chosen by Marino, who spends an average of 1-2 days every week at the Carpi slaughterhouse in order to select only those that meet his quality standards, coming from heavy pigs with more than 5 centimeters hight The seasoning is also identical, which lasts for at least 6 months, during which, thanks to the release of humidity and the effect of the salt, a brine - lethal for bacteria - is created. This is why lardo and guanciale are free of any nitrite or nitrate.

The salt used for the brine deserves an additional word: Sicilian sea salt with large crystals, to which Marino has recently decided to give new life, in the perspective of circular economy.

At the end of seasoning, the salt is left to dry and then packaged as a product itself: the Salt of Colonnata. It has absorbed, in the months spent in the marble tanks, the flavor of aromatic herbs and spices, and can be used as a condiment for meat, but also for fish.

It is an ongoing project, which will be presented hopefully next year at Cibus. “Once again I registered the trademark, and at the moment, for Sale di Colonnata, there are no PGIs on the horizon” - he tells me with a wink.

“It’s not just about doing business, what matters sometimes is the idea, the ability to listen to and anticipate the market, and let your choices tell who you are“.

And he undoubtedly managed to do it.