Travelling at the origins of lardo

While dining in a restaurant in Treviso I’ve been served a local butter whi... 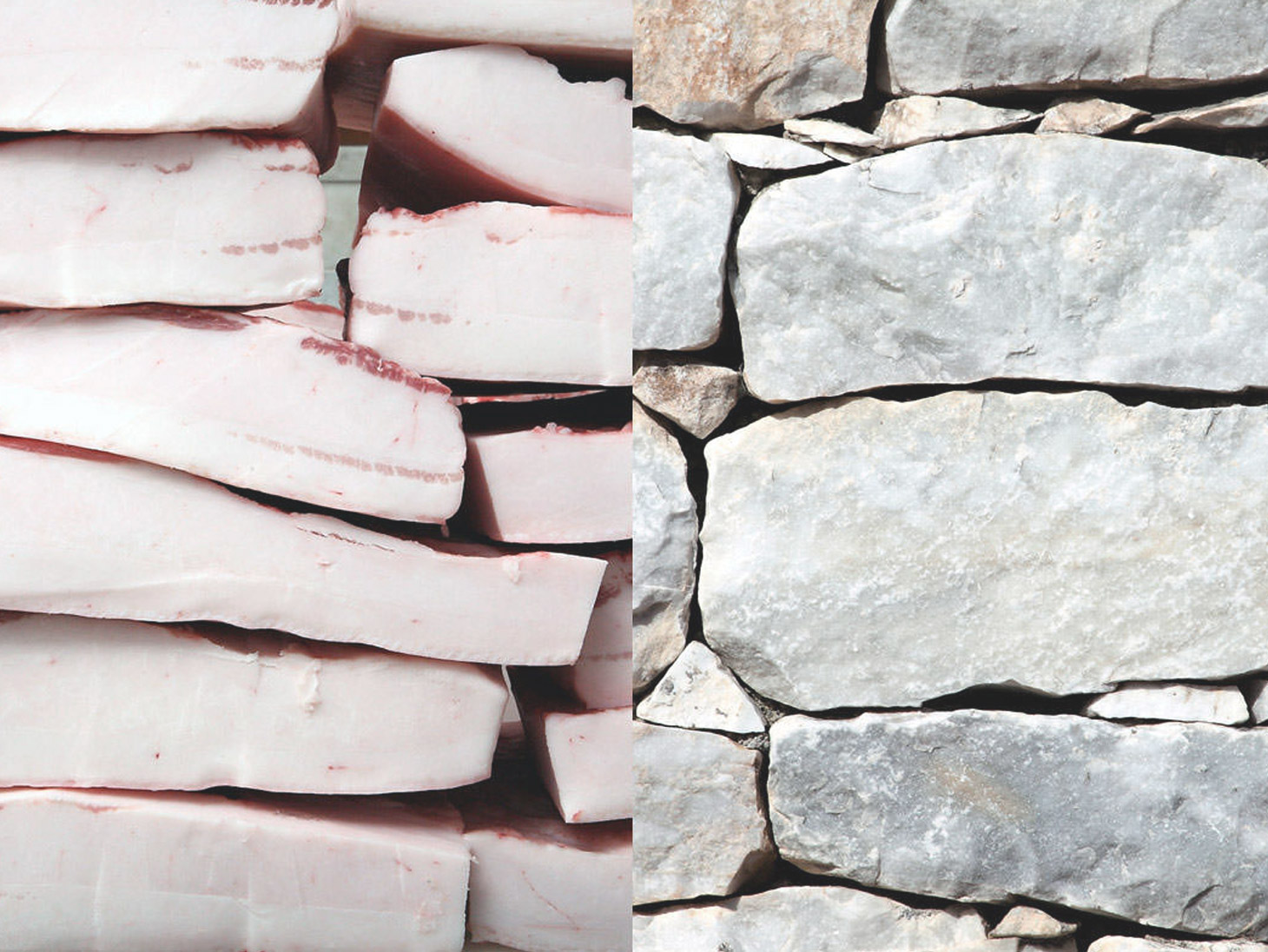 While dining in a restaurant in Treviso I’ve been served a local butter whisked with a Moroccan spicy mix (Ras el Hanout), next to that I obviously had bread. This well balanced blend of ingredients originating from different places has stimulated in me an idea: it happens very often that we have to know or observe what is far and foreign to understand or reconsider what is next to us. You are now wondering for sure where I want to lead you since I’m supposed to speak about Lardo, however I cannot talk about that matter without considering how pork meat has entered Italian cuisine and from which culture its usage is coming from. The big revolution took place about sixteen century ago, when the decadent Roman empire culture - which had a cuisine based on the triangle: bread, oil and wine - crashed against the nordic Barbarian cuisine - which was founded on meat, milk, butter and lard. This last mentioned food guaranteed a caloric contribute good enough to face a rigid climatic condition compared to the Mediterranean.

Our tour starts in Valle D’Aosta, a mountain region, where Bertolin family produces Lard d’Arnad Dop. Since 1500 in this part of Italy this product was commercialized. His peculiarity is due to the maturation method, infact lardo stays for a minimum of 90 days into “doils”. Containers made by chestnut tree wood, durmast or larch that host lardo blended with water, salt and a mix of spices like : garlic, rosemary, sage, juniper,bay tree leaves, pepper and nutmeg. Taste is truly connected to this mix, with a gentle prevalence of rosemary.

We cross now all the northern regions to land in Veneto where we have a common Lardo Salato, very oftenly used for cooking, an essential for Venetian cuisine. It is used to savour roasted meat, sautéed, stuffings or even vegetables, like wild radicchio. It is obtained from the thinner part of dorsal fat and the maturation is extremely short.

Very different from the product we found at Colonnata. The place of Lardo for antonomasia, ackowledged all over the world. If you say Lardo you think at Colonnata. In that town, close to the city of Carrara in Tuscany, lard has been always the feeding of marble workers since Roman times. Michelangelo Buonarroti used to go there to choose the marble for his masterpiece and it is told that he often had feast of Lardo. This product is matured for a minimum of 6 month in marble cases. The spices used are an heritage of Greeks sculptors that Romans invited at Colonnata to pass the knowledge of marble treatment to local workers. Those flavours were used by hellenic people to dress their food and keep a link to their patria. It’s an intense mix of sea salt, grounded pepper, fresh rosemary, skinned and chopped garlic and a hint of cinnamon, nutmeg, cloves and anice. Perfume is fragrant, the charming hint of spices and the voluptuous touch of fat create a beautiful complexity in the palate. It’s up to you the decision of trying either the Lardo of Marino Giannarelli or the one Renata Ricci, Il Poggio. Both are extraordinary anyway!

Staying in Tuscany, this time close to Pistoia city, we are now meeting Bernardini, producer of Lardo Patanegra. The name is suggesting us straight away the provenence of lardo from Iberico pigs, animal that has a different fat constitution, very rich of non-saturated fat. Maturation lasts more than 6 months and it happens in marble cases , we should then expect a certain height and a subtle layer of lean meat. Taste is extremely sweet and doesn’t have particular spicy hints, texture is very soluble and silky as we should pretend from a proper Iberico pig fat.

And this breed offers me the excuse to introduce you at the last stage that is located in Sicily, as oftenly happened in this column. Mirto is the village and we are located in the north eastern part of the island. Here Agostino Sebastiano Ninone produces cold cuts with Nero dei Nebrodi pork meat. This pig has many genetic similarities with the most famous spanish one, altough there are also important differences like the size. The sicilian is by far smaller and for that reason the lardo has a limited dimension. It has an approximate period of maturation of 6 months and during that it stays in contact with red and black pepper. Colour is shiny white, taste is very delicate, sweet, with a light sapidity and a vivid aromatic notes of pepper. Since Lardo is a mountain preparation, either for preservation reason or for caloric supply, the only sicilian production is in Nebrodi mountains.

Now I can oly suggest to light-on fires, toast some bread and combine a thin slice of Lardo. Which one of those? Your favourite one obviously! 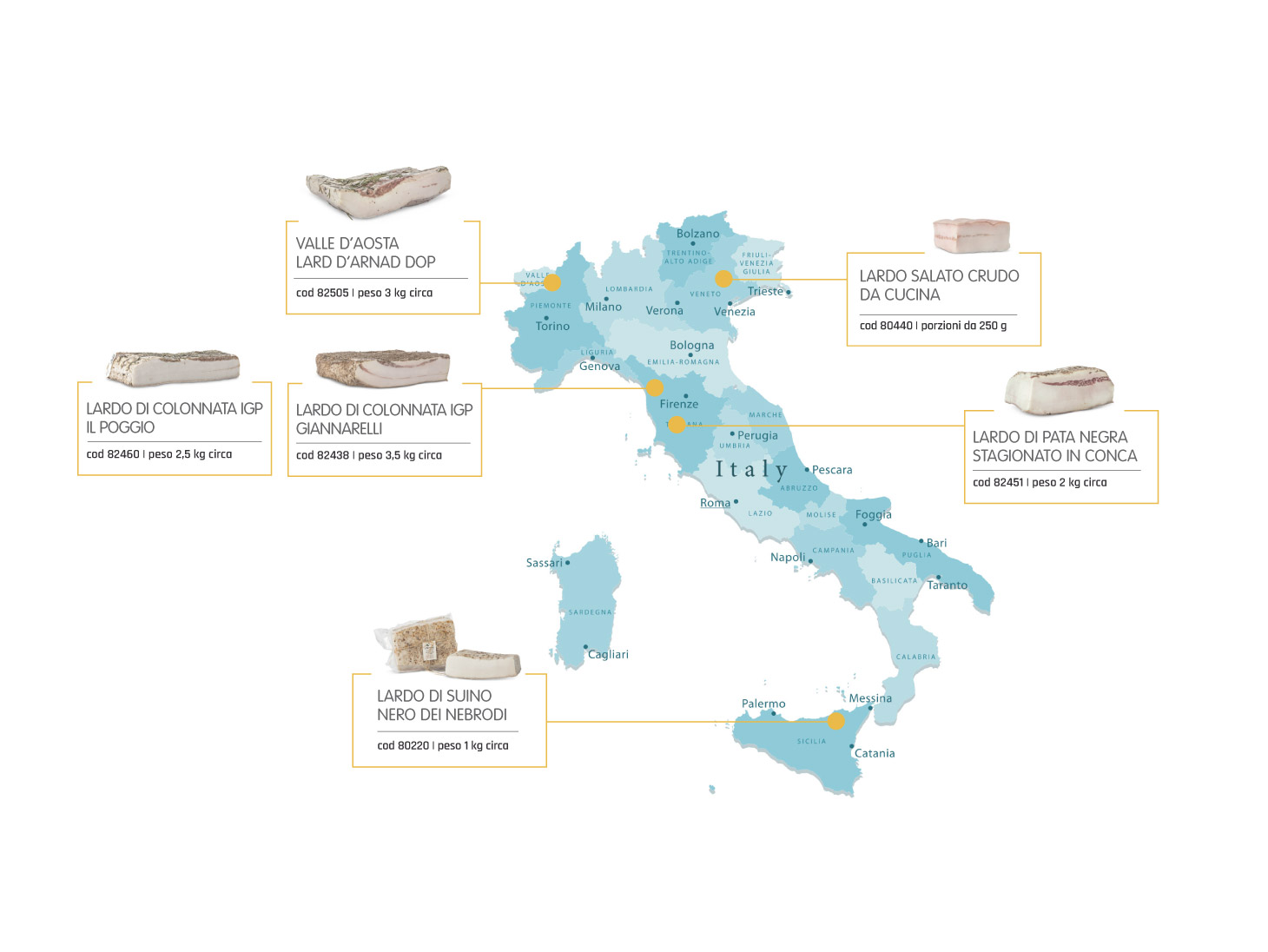