Make space for lard... especially in the kitchen

Since the dawn of time, lard has always been one of the most widely used anim...

Since the dawn of time, lard has always been one of the most widely used animal fats in the human diet, both in its natural state and used for cooking food, as well as being transformed into oil or suet for preserving foodstuffs

As a derivative of the pork, the “geographical location of lard” coincides with farms, where the pig was seen as the farm animal par excellence due to its easy breeding and rapid proliferation.

Each family had at least one and since “no part of the pig is thrown away”, as farmers well know, lard was one of its most precious gifts.

In the Christian society of the West, a whole host of dishes were prepared with lard and its derivatives.

Some preparations still survive today, despite the fact of change in lifestyles and consumption, its use has fallen drastically since the mid-1900s, in favour of vegetable oils and butter.

Few people, however, are aware that lard has 20% less saturated fats and a higher number of polyunsaturated fats than butter, especially if the animal are feed spontaneously in the wild like cerdo Iberico (Iberian pigs).

It is no coincidence that the Spaniards have dubbed it the olivo con patas (olive tree with legs).

Above and beyond the pleasure of enjoying excellent lard, such as Arnad, Colonnata or Nebrodi, its use in the kitchen is a must in the preparation of many traditional recipes, from cunza (Modena-style pesto) served with borlenghi from the Emilia Romagna Apennines (a kind of very thin and crisp crêpes) to necci incicciati (similar to crêpes, made with chestnut flour) from the Tuscan side.

It should be used instead of other fats to obtain a puff pastry effect in pies (savoury pies filled with meat, vegetables or fish, typical of English cuisine), a more crumbly dough for biscuits, as well as a crisper and more golden skin for baked potatoes.

Chopped with a knife and flavoured, it is used to stuff countless lardy breads (traditional English bread, packed with spices) and dripping sandwiches, from Hungarian zsíros kenyér (toasted bread) with paprika and red onion, to German griebenschmalz with simple sweet and sour gherkins or sautéed yellow onion and crisp diced speck. It was also used in the Middle Ages in apfelgrammelschmalz, to which apple was added, sautéed in lard.

The Poles went one step further and combined it with nuts.The Danes included it among the essential ingredients used to prepare their favourite pâté, leverpostej, used to spread on open smørrebrød sandwiches (traditional Scandinavian buttered rye sandwich, topped with cold cuts, meat or fish, and cheese).

The best one ever can be enjoyed in Copenhagen at Stryhn’s [stryhnsleverpostej.dk].

In Anglo-Saxon cuisine, traditional lard is a staple ingredient in Christmas puddings, lardy cake (a popular tea cake in some southern English counties) and even in fish and chips in some areas. Its role is so important that the highly popular Lard Championships are held every year in Dorset.

Lard also appears in many Spanish recipes, from caldo gallego (Galician broth) on the Atlantic coast to Andalusian zurrapa de lomo (a dish based on pork tenderloin fried in lard and salt), but it is also widely used in baked products such as the coca catalana or ensaimadas from the Balearic islands.

In France, lard is mainly found in the Alpine regions, from the Hautes-Alpes to Savoy, in simple and delicious recipes, often similar to those of the Aosta Valley or Tuscan tradition, such as baked lard roulade stuffed with plums or boiled chestnuts, the latter served with honey.

Since the pig is an animal forbidden by various religious food regulations, such as Islamic halal and Jewish kosher, lard is not found in the Arab world or among Jewish communities; it is also banned by Eastern religions, from Buddhism to Hinduism.

In China, in addition to appearing in the zodiac signs, the pig has always been considered an animal-food-ingredient essential for survival in the countryside, especially in the south (Guangdong, Zhejiang, Fujian and Jiangsu) in times of extreme poverty.

China is now the world’s leading producer and consumer of lard, but rapid changes are limiting its consumption to the countryside.

The Chinese prefer frying many of their foodstuffs in oil obtained from melted lard, not only for the authentic taste that it gives food, but also for its characteristic high smoke point (190°C) which is much higher than that of butter (150°C).

In home kitchens and some restaurants in Taiwan, Hong Kong and Macao, lard rice or rice bibimbap (豬油拌飯), a peasant dish of rice, cooked by the absorption method, is served flavoured with soy sauce and lard fried in its own oil.

In the Americas, the widespread presence of pork and lard followed a different path.

Since there is no native species present, pigs were introduced after America had been discovered. In the north, lard was introduced by the English colonies which used it in traditional recipes to experiment with fried chicken (pieces of chicken coated in batter and fried in a pan). In the Latin and South America, it was diffused by the Spanish conquistadores, becoming one of the most well-loved ingredients in Mexico in cocina mestiza (Hispanic-Mexican cuisine) and being included in the popular dishes of pre-Columbian cooking, from tacos to tamales.

Tex Mex cooking has, however, slowed down the use of this ingredient. Only recently, restaurants, like the Frontera, managed by chef Rick Bayless [rickbayless.com] have cleared the way again to its use, enhancing its properties.

An example that has recently become popular in Europe, thanks to chef Bruno Oteiza of the Gatxupa restaurant in San Sebastian [gatxupa.com], who cannot do his unique and irresistible tacos without it!

Recipes from the world

Turn on the oven and select the grill setting.

Cut the lard into thin slices to wrap around the pitted prunes.

Close the bit sized of lard and prunes with a toothpick or spear them onto bamboo skewers, three at a time.

Place them in the oven under the grill in an oven tray and cook for 8-10 minutes, turning them halfway through the cooking time. Serve hot as a starter.

You can prepare roulades with lard and prunes, using boiled chestnuts and honey as an alternative 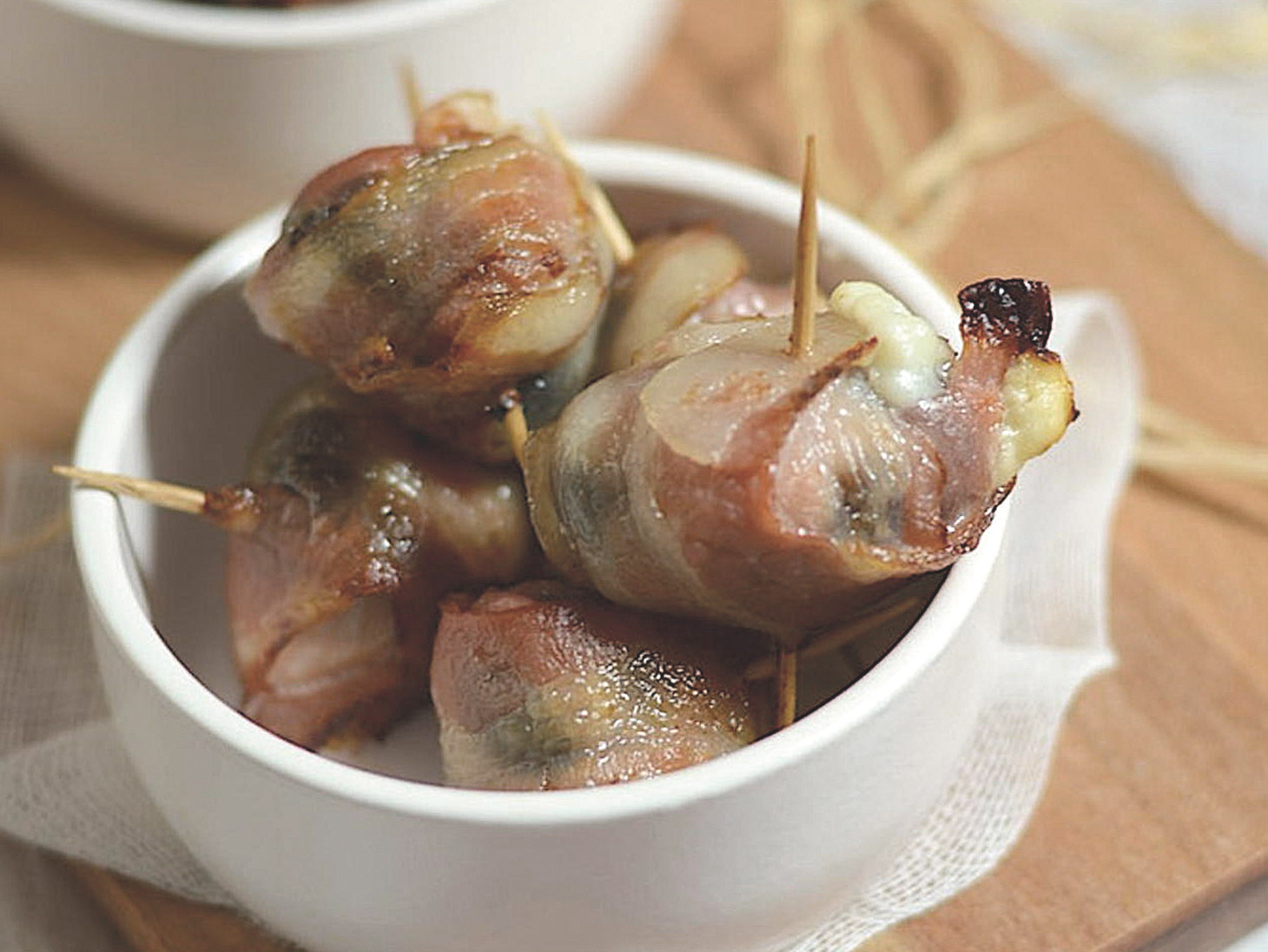 Wash the rice under running water, then transfer to a rice cooker or a heavy-bottom pan with a lid, covering it with cold water, about half a centimetre over its volume.

Place on a high heat with the lid on and turn the heat right down when the water starts to boil. Leave to cook until all the water has been absorbed without taking the lid off or stirring the rice for about 8-10 minutes.

Turn the heat off and leave to rest with the lid on for 5 minutes. Pour the soy sauce into small pan and bring to the boil.

Add the star anise and crumbled cinnamon stick; leave to infuse for 2-3 minutes before filtering.

Separately, dice the lard, transfer to a wok and cook on a medium heat until it has released all the fat and the diced cubes have turned golden brown and crisp.

Remove the lard and fry the spring onions (including the green part) in the lard oil, together with the ginger and Sichuan pepper (if used).

Filter the flavoured oil and heat it in a wok. Sauté the cooked rice for a few seconds. Flavour with the fried lard, decorate with spring onions cut into rounds or chives and serve in a bowl. 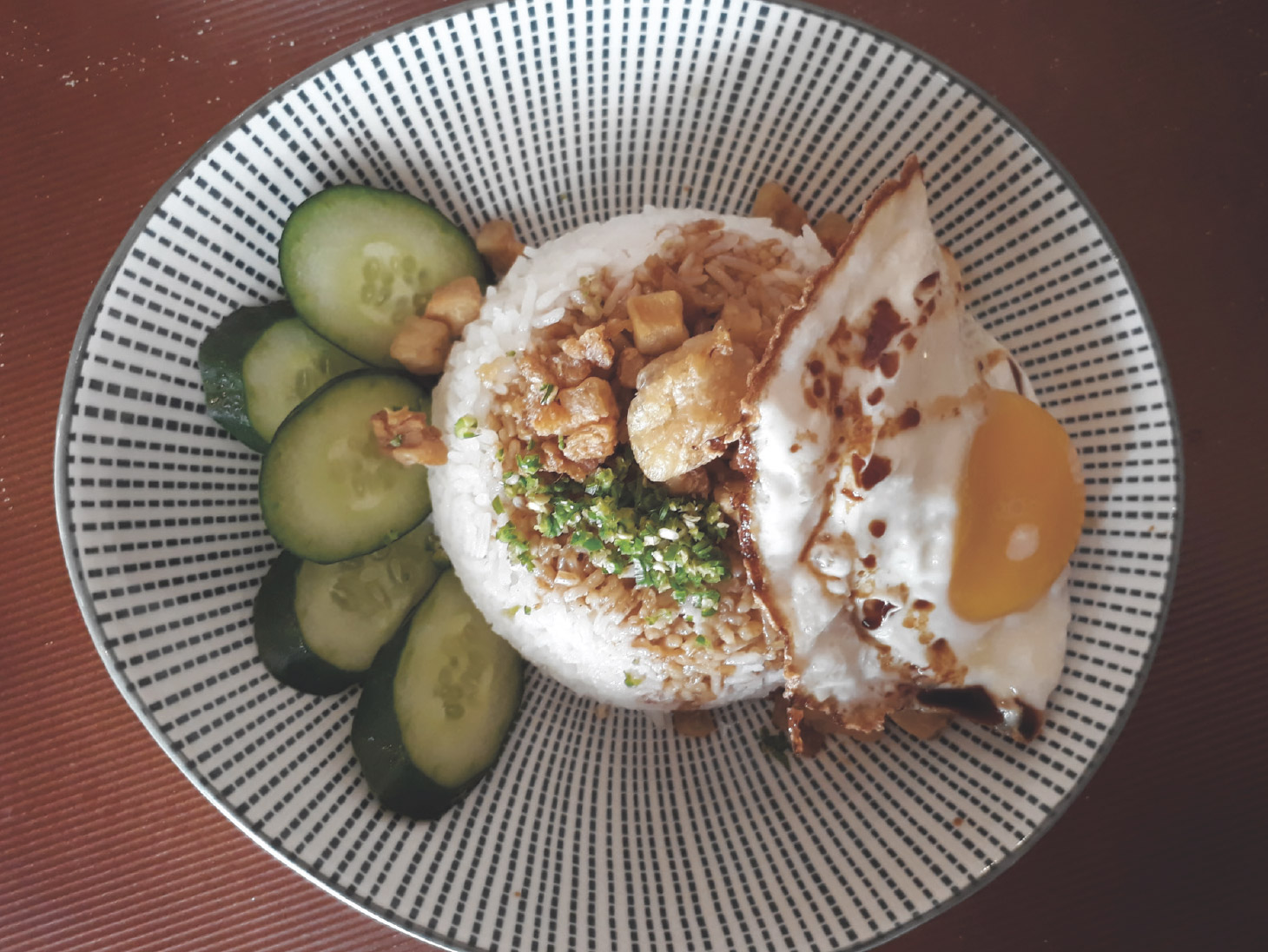