Story of a trip that, due to Covid, we unfortunately had to convert into a vi...

Story of a trip that, due to Covid, we unfortunately had to convert into a virtual one. Hoping to plan soon a real visit to this wonderful farm, with which we start a new adventure

I met Guido just a few days ago on Zoom, a virtual space in which many of us are spending their days between calls and meetings, during this period of smart working.

We organized an online training and tasting with our sales persons focused on the Queen of the summer: Buffalo Mozzarella.

To each participant was sent a kit with the four items of Buffalo Mozzarella we have in our range, produced by totally different companies: Rivabianca, LadyBù, Borgoluce and the new entry, La Maremmana. We did a comparative tasting of the four products, then we asked Guido to introduce his company to all of us.

To tell you the truth, we have known Guido Pallini for some time and had been monitoring La Maremmana for a couple of years, as we met many times in many fairs around the world, from the Cheese in Brà to the Specialty in London: a mozzarella made with buffalo milk which does not belong to the Mozzarella di Bufala Campana DOP consortium but nevertheless has its own personality and a beautiful story to tell.

“When my father, in the late 1980s, decided to buy fifty buffalos from an Apulian herd to raise them semi-wild in a farm on the hills of Grosseto, in the south of Tuscany, everyone told him that they would have died within a few months. More than 30 years have passed and now the buffalos are more than 700“ Diaccialone farm is located in Capalbio, in a rolling area in the province of Grosseto: 400 hectares of arable land, where cereal and fodder for animal feeding are produced, and 600 hectares of forest and grazing land where animals are wildly bred.

Here also 150 heads of Maremmana cows are raised in the wild. The Maremmana is an autochthonous cow breed of lower Tuscany and upper Lazio, rustic and robust, with large lyre-shaped horns and a coat with gray shades.

In the past this cow was used both for meat and work, but as the marshes in Maremma were drained and mechanization became more common in agriculture, it came close to extinction.

Today there are around 11,000 animals in two regions— Lazio and Tuscany - and the Maremmana became a Slow Food Presidia.

It is a frugal cow, who adapts well to difficult environments and cannot be kept indoors, but must roam freely.

This explains the survival of the figure of the “buttero”, the horse-riding cowboy who herds the cattle

La Maremmana farm was born precisely with the breeding of this beef breed, but during the crisis of the 1980s it became necessary to convert the production.

Marcello Pallini, Guido’s father, during a trip to Salerno fell in love with the buffalos, robust and intelligent animals, and decided to reintroduce them in Maremma. 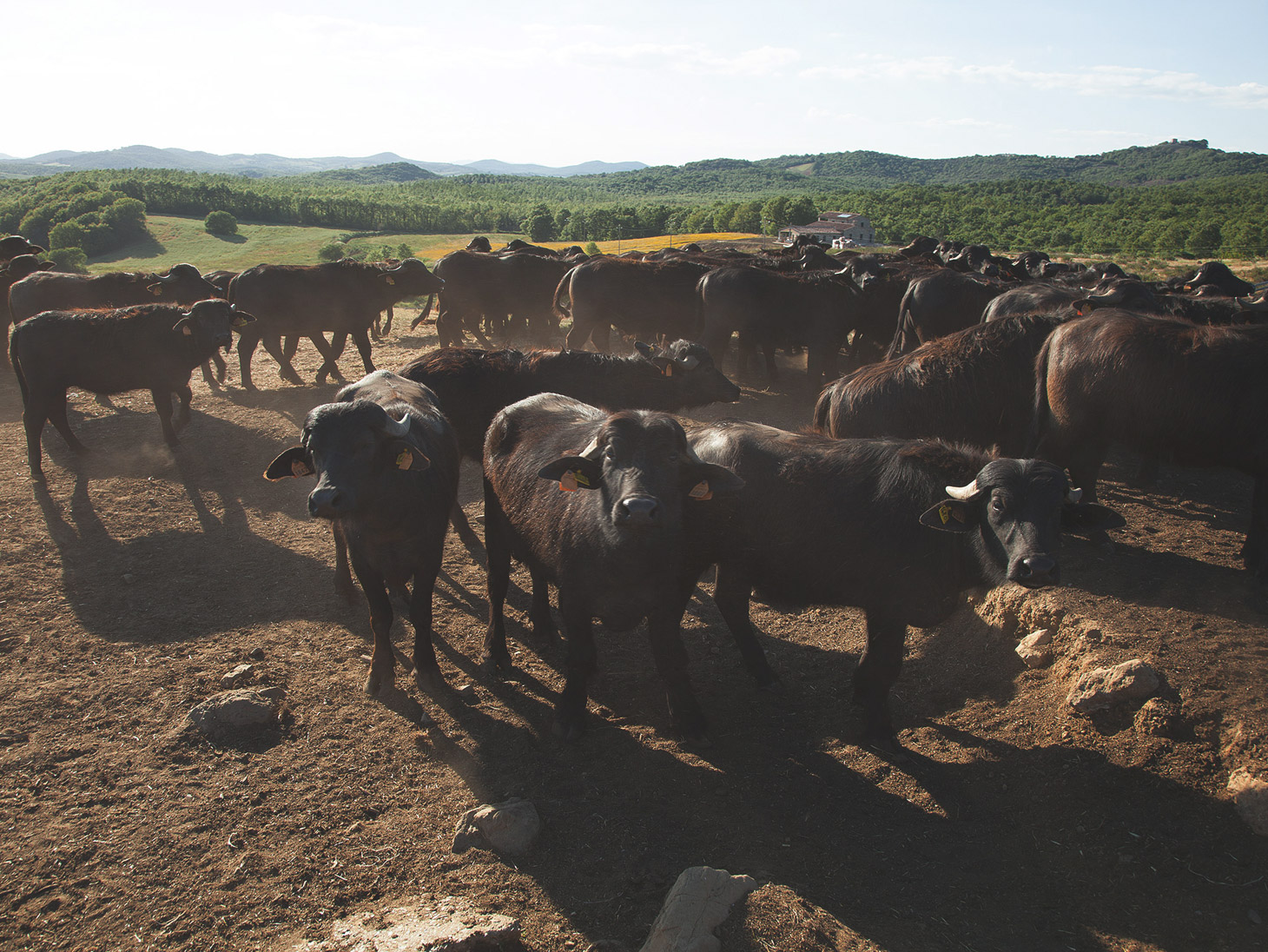 Re-introduce, because before the reclamation Maremma was a very difficult environment, with many similarities to the Piana del Sele, in Campania, where buffaloes were traditionally used as working animals, precisely because of their ability to adapt to the most difficult conditions.

After the reclamation, the buffalo breeding practically disappeared from Maremma, maybe also because they reminded the farmers of those difficult times.

I take back my travel notes from last year. I visited this area of Tuscany more or less in this same period: I close my eyes and see the farmhouses, the cypresses, the hills.

A millennary landscapes that empty the thoughts and lighten the spirit, especially if accompanied by the sound the summer, the cicadas.

Let’s stop the memories, this time I have to settle for a virtual journey: I start from the company website lamaremmana.it where I am immediately pleased with the photos and videos gallery (really beautiful), which allow me to get a fairly precise idea of the company.

And worsen the regret not to be phisically there. Sooner or later we’ll do it!

Then, as often happens during a trip, I get lost along unscheduled paths, reading the interviews given by Guido to various newspapers and organizations.

So I find out that dr. Pallini, degree in Economics and Finance, before taking over the family business worked for a couple of years in the City, in London, in a Japanese investment bank: he is one of the brave young people who decided to leave a career to return to the origins

As a comment to this decision I read in one of the various articles that, however, today, choosing the farm is no longer considered such a crazy gesture.

Maybe not crazy, but certainly brave.However, it is comforting to discover that in Italy the number of farms led by under 35s has grown by 12% in the last 5 years: young people who have often had previous experiences in the different companies as marketing, sales or finance manager, often abroad, and decided to return home bringing with them a wealth of skills, expertise and vision to be inserted in the family tradition.

As in the case of Guido, who is giving new energy to a family who has been breeding herds for 200 years, when in Maremma transhumance was still practised. “The financial experience was very interesting and I have to say that it’s helping me even today. It is a different concept of life. My father sold milk without processing it. I wanted to close the circle by building a dairy inside an old farmhouse in our estate, where we now produce many types of buffalo cheeses. Transforming today is an obligatory step, because it is what gives added value to what is produced”

Today 90% of the milk is processed in the own dairy, while the remaining 10% is still sold to other dairies in central Italy, but the aim is to transform all production. The “Inno al Sole” dairy is located in Principina Terra, a hamlet of Grosseto, in the heart of the Maremma.

It was obtained from a 17th century’s farmhouse, 500 meters from the stable, next to the company store, separated from the laboratory only by a glass to give customers the opportunity to see the production. “In the dairy we use exclusively buffalo milk from our farm, to produce hand-made buffalo mozzarella, ricotta, yogurt, burrata and a variety of French-inspired cheeses.”

The cheese maker, Francesco Fasulo, comes from Battipaglia, the cradle of the ancient tradition of buffalo mozzarella. “We chose a person with experience in the processing of buffalo milk to enhance our milk, since all our customers always told us it is of excellent quality, delicate, with a low bacterial load”

At the beginning the shed was in Capalbia, where also milking took place.

In 2000 we decided to transfer the buffaloes “in production” to the stable in Grosseto, where now there are about 400 animals (150 in lactation): here the animals live in a spacious structure that combines a shed where the animals can rest to open fields where they can roam freely.

The buffalo calves arrive here at around 6 months of age from the farm in Capalbio (50 km far away), where they spend more or less 2 years before they are ready to enter production and thus go back to the farm in Grosseto.

“These two years living on open air are very important for our animals: the wide spaces and the living conditions make the animals grow up healthy and strong, with a positive effect on their welfare, and as a consequence, on the quality of milk, but also on their longevity: our record is a 20-year buffalo with 17 calves”. Those who visit the Diaccialone farm in Capalbio are always struck by the large spaces available to animals: 1 hectare per 100 animals.

Here the buffaloes live half-wild outdoors in the hills of the farm and are fed with the uni-feed system. Around the stable there are many hectares of arable land where cereals and fodder are grown for animal feed.

80% of the food is produced on the farm: corn and wheat silage, hay, with an integration of corn flour and soy flour to give energy and proteins

Once again we rediscover the fundamental concept on which each short supply chain is based: the control of animal feed is the key for the quality of the milk, and the cheese.

During the Zoom meeting we find in Guido’s presentation another concept that we care a lot about: the production model of the Pallini family is inspired by the idea of circular economy, to maximize efficiency and environmental sustainability of the company.

The farm has a renewable energy biogas plant which can produce up to 400 kW of electric energy per hour, and heat.

The electricity produced is used to power the farm and cheese factory, the excess energy is sold to the national grid.

Organic materials such as dedicated crops, whey from the cheese factory and other agricultural waste products, e.g. buffalo manure and the by-product of olive oil production, are degraded by several types of microorganisms and turned into biogas.

At the end of the digestion process, the by-product of biogas production is called digestate. Digestate is an organic fertilizer that contains nitrogen, phosphorous and potassium, which is used to fertilize the farmland where fodder and silage are produced, increasing the fertility of the soil and reducing the need for chemical fertilizer.

Back to the land, according to a millenary circolar economy. Another important practice adopted in the company is the sod-seeding, also known as no tillage farming: it is a technique of “conservative agriculture” and consists in sowing crops without disturbing the soil through tillage.

No tillage presents environmental and economic benefits. It greatly reduces the operations farmers perform on the land, reducing work time and fuel consumption.

By avoiding to disturb the structure of the soil, sod seeding eliminates soil erosion, improves the filtration of and conservation of water, the organic matter content and the biodiversity within the soil itself.

For this purpose, drip irrigation was also introduced, a technique with which water is dripped slowly to the roots of the plants from a system of tubes placed on the surface of the field.

This form of irrigation greatly reduces the quantity of water used and allows to lower both the cost for the farm and the use of water, benefitting the community and the environment.

Usually my readings find their conclusion in a real journey. This time ended up with a meeting on Zoom.