A journey to discover how Ventricina del Vastese is produced: a unique cured ...

A journey to discover how Ventricina del Vastese is produced: a unique cured meat made with fine cuts of pig's thigh and pepper powder, aged for at least four months
⏱ 4 MINUTES READING

There are journeys that come to meet you, a few that you stay away from, and others that you look for with determination, like the one I am telling you about today. I am writing you about a trip to Abruzzo, to discover the identity of Ventricina del Vastese, at the Fattorie del Tratturo in Scerni (CH).

We decide to leave in the late afternoon of a day at the end of July, in order to make almost the entire journey until late in the evening, already imagining that along the Adriatic coast we would find queues or other glitch that would have slowed us down. So it happens, but in any case in the very late evening we stop in Lanciano to rest: the next day we will be in Scerni in only one hour drive. Fattorie del Tratturo is a farm located in the medium-high area of Vasto, a town a few kilometers from the sea, with a strong agricultural and once pastoral vocation: it is in fact  crossed by several "tratturi", the paths of transhumant shepherds. Approaching Scerni we have the feeling of entering a unique territory, dense hills full of olive groves and fields gilded by the stubble of the wheat already harvested create a fantastic alternation of colors.

We meet Luigi and Antonio, the Di Lello brothers, at the company's shop, where the family agritourism, called Fattoria dell’Uliveto, and the operational office of the farm are also located. The welcome is warm, we have spoken several times by phone over the previous months. We were supposed to meet in April, but we had to postpone a couple of time the trip. We are happy we finally made it. We sit down immediately in their office and the brothers tell us a little about their family company story..

In 1993 they inherited the farm from their fathers with the idea of enhancing the production of Ventricina del Vastese, a pork cured meat, mixed with red pepper powder and stuffed into the pig's gut (ventre is the italian word for belly, hence the name ventricina). At that time Ventricina was produced only at the family level. 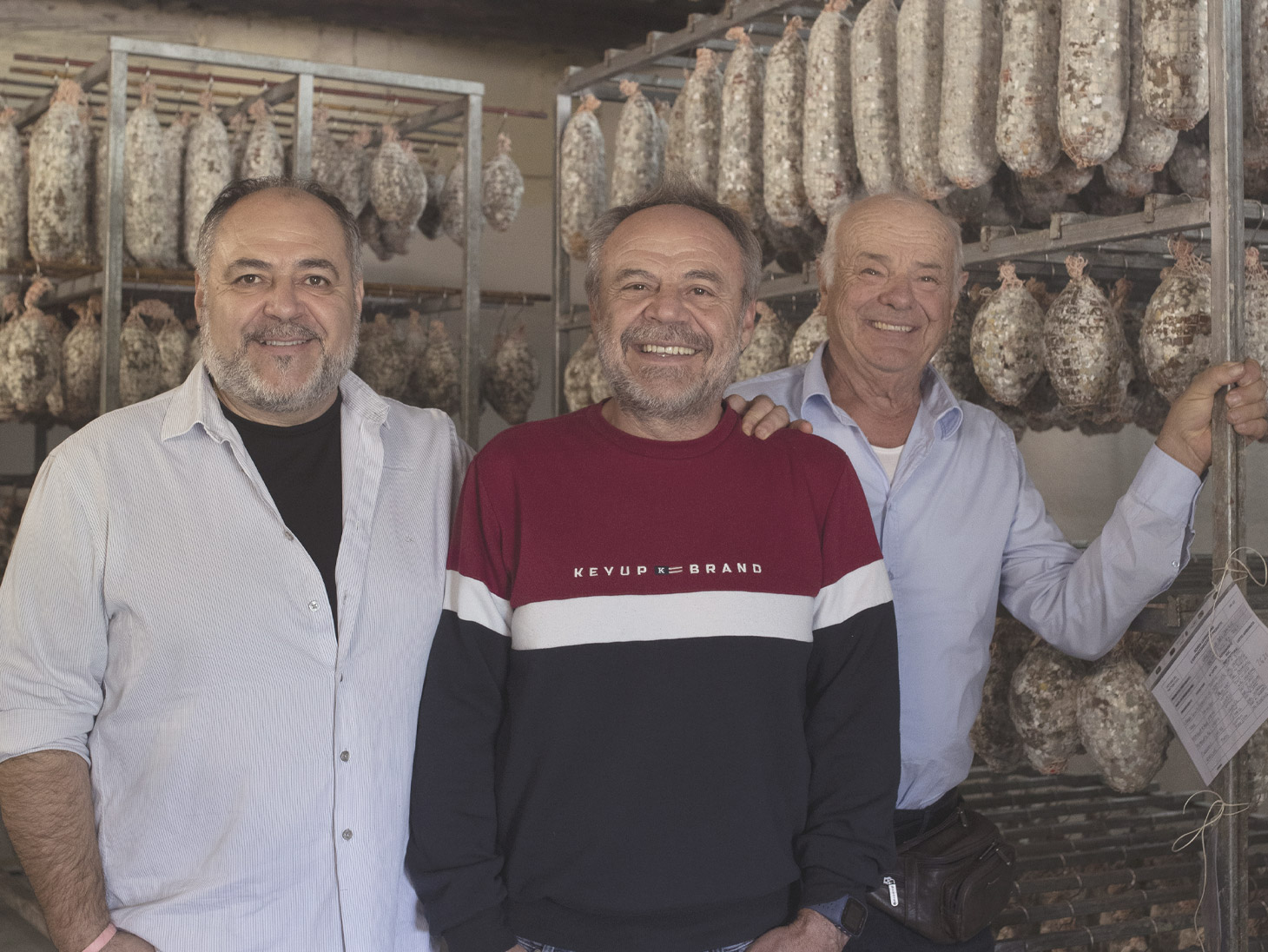 In 1995 they founded the Accademia della Ventricina, with the idea of promoting knowledge of the product and helping its marketing. In 1998, together with Slow Food, they set up the Presidium: at the time there were four producers involved, today about a dozen. Finally, in 2005 the Fattorie del Tratturo were born, a union of two farms, the one with a butchery vocation of the Di Lello family and the one with a cereal vocation of Alessandro Di Virgilio which I will talk about later; the aim was to merge the supply chain, that is, to bring together pig breeding, feeding and processing of meat.

Until 2013 a balance was found, but since then it was necessary to give up with the pig farming, too demanding for a small farm. Today the company remains the same, however the meat is purchased from farms in central Italy.

The chatter continues, we tell Luigi and Antonio about our “Sapori” event, we would like to have them as guests to tell our customers the complexity and beauty of Ventricina and they immediately accept without much second thoughts.

But now we want to see where this unique cured meat is produced and then we move to Alessandro Di Virgilio's company, a few kilometers from the Uliveto Farm. At the top of a hill, near an ancient monastic settlement, born with defensive functions, we find the small cured meat factory and the fascinating seasoning. Once we enter the laboratory, the Di Lello brothers begin to tell us about the steps in the processing of Ventricina. First of all, this Slow Food Presidium is produced only in the autumn and winter months, i.e. from October to March. And in fact we returned to Scerni a few days ago with our photographer, Beatrice, just to make a reportage of the Ventricina production.

"We always start from the whole side of the pig, which is "disassembled" - that is to say it is sectioned and then the different cuts are divided according to the processing". The thigh and other lean cuts, along with some parts of the belly are used for the Ventricina, the shoulder and other minor cuts for the salami, loin and bacon. 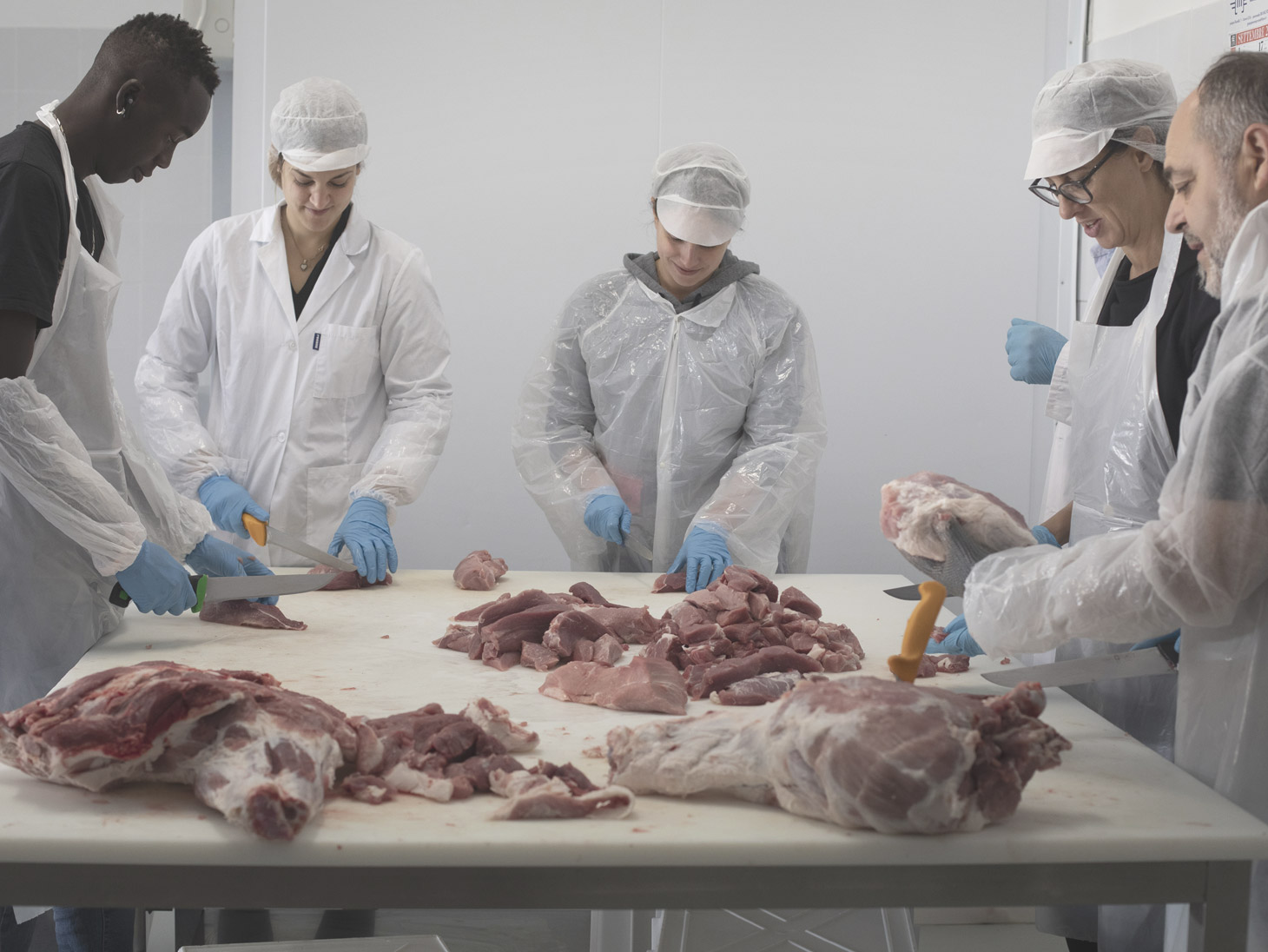 Let's focus on the Ventricina! The pork leg and its fat are cut in cubes by hand and carefully groomed, then mixed with sweet and spicy red pepper minced into powder, fennel, salt and pepper, together with a part of the previously ground bacon, to allow the dough to bind. No preservatives are added: the antioxidant power of the pepper, the presence of salt and the slow fermentation of the meat guarantee optimal conservation. The dough is then left to rest overnight, before moving on to the next step. 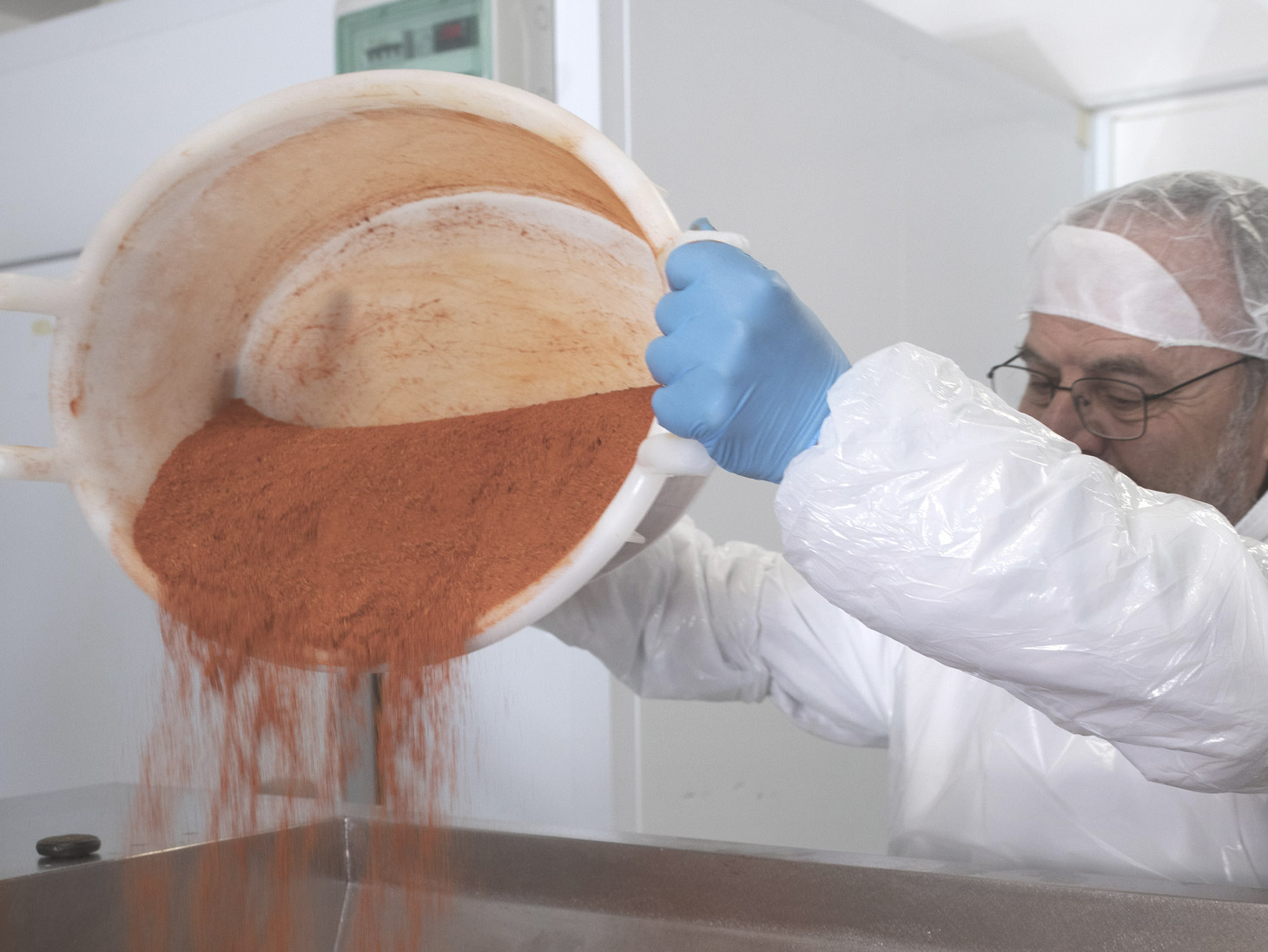 Now all that remains to do is to stuff the meat into a natural casing and start a slow drying: the first week the product remains at a controlled temperature, in a dedicated cell, which helps to dry the meat and stabilize the preparation. This very small cell contains all the Ventricina produced in a production session, so it effectively regulates the production capacity of the company. Until the cell is emptied, no more can be produced.

In fact, Ventricina is produced only once a week for only about 6 months a year. 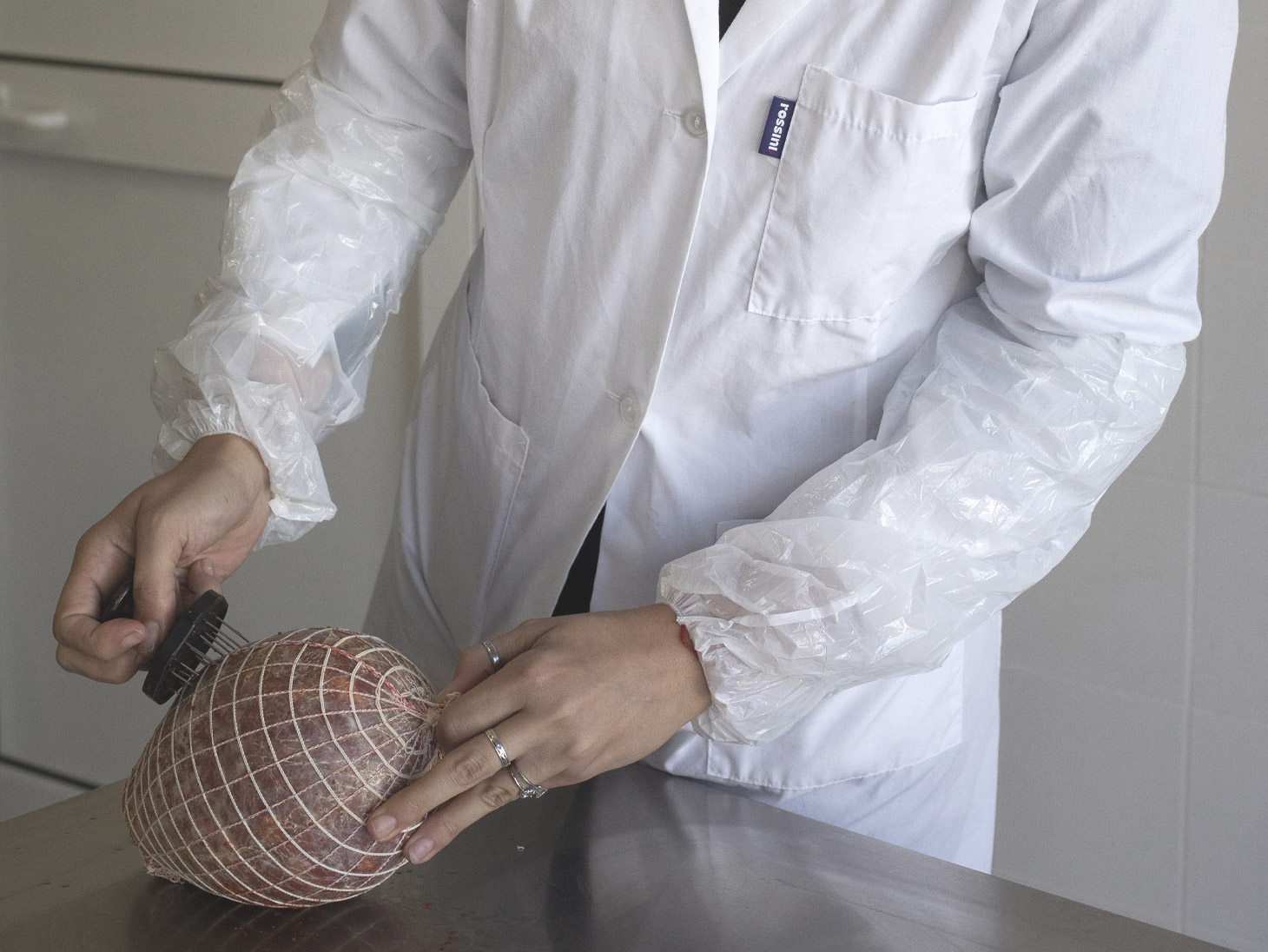 In fact, Ventricina is produced only once a week for only about 6 months a year. The size can vary, traditionally it could even weigh 10 kg: a whole belly, which matured for more than 6-8 months and was "broken" in pieces by hand at the time of harvest, and eaten with bread. Today the needs of service have imposed more reduced measures, around 1,5-2 kg, which in any case, if well matured, guarantee authenticity and richness of flavors.

The aging of the product takes place inside the so-called "Caveau della Ventricina", a cool, high-ceilinged cellar located inside an ancient tower where Alessandro Di Virgilio lives, in the same courtyard where the laboratory is located. It is Alessandro who takes us into the Caveau: at the entrance the olfactory impact is remarkable, all the aromaticity of the pepper, the mature salami and the cellar emerge. Ventricina of all sizes and shapes are hung either from the ceiling or from the trolleys. We note that Ventricina is covered with a white patina and we ask for information.

It is "sugna", pork lard, similar to the one used to age Parma ham: it forms a shell with an almost waxed consistency that allows to keep the meat soft and regulate the escape of moisture; the greasing and care of the product is done by Kothi, a boy we see at work in a room adjacent to the cellar. After the first month of curing Ventricina is cleaned from moulds and covered with sugna, before continuing its aging process for at least three more months. The sugna is then removed at the end of maturation and Ventricina is cleaned and vacuum-packed, ready to be shipped to customers. After a long wait, we just have to taste the product, strictly cut with a knife. The slice has an almost marbled appearance, parts of lean and parts of fat are separated by a thin red-brown network that is pepper, the nose is simply explosive: notes of roasted pepper, almost smoked, fennel, cellar, umami and ripe meats bind in a perfect marriage that is found even more accentuated and balanced in the mouth. With my mouth watering, I do several encores, I can't stop myself!

At the end of the tasting we say goodbye to Luigi, who has some more appointments in his schedule and we follow Antonio's invitation to have lunch together, the Brodetto alla Vastese awaits us! Can we exempt ourselves? Absolutely not, there are trips that come your way and that you cannot avoid!

PRESIDIO SLOW FOOD
Slow Food Presidium since 1998, Ventricina has a strict tie with the land of Vasto area, in the province of Chieti - Abruzzo region - where it comes from

THE AREA
the higher part of Vasto area is a land of rolling hills, which includes about 30 municipalities at the border between Abruzzo and Molise region

THE HISTORY
The first, certain, historical documentation of ventricina dates back to 1860; it was the food of the peasants, a ham "in pieces" that could be taken to the fields; it was consumed in the important moments of rural life, e.g. the harvest and the grape pick

THE PRODUCTION
it is produced from October to March; the pig's leg is deboned and sectioned into cubes of 2-3 cm, seasoned with salt, sweet pepper powder and wild fennel, then stuffed in the bladder, tied by hand and hung to dry; after a month it is cleaned and covered with sugna (pig's lard), then aged for at least three more months