"You have to see how we work and then write why Casa Graziano is not just a P...

"You have to see how we work and then write why Casa Graziano is not just a PDO Parma Ham": this is how Graziano welcomed us in his ham factory
⏱ 4 MINUTES READING

The whole Casa family welcomes us in the new tasting room, which will be ready in a few days; at the moment it is still "work in progress" but it is already clear that it will be really beautiful. We meet at first Andrea Casa and his wife Federica: we know very well each others since we usually meet in various fairs  and event. Right away also Simone, Andrea's brother, and their parents, Graziano and Luisa, join us. We decide to start with the family photo for the cover, in order to leave then Graziano and Luisa free for lunch. 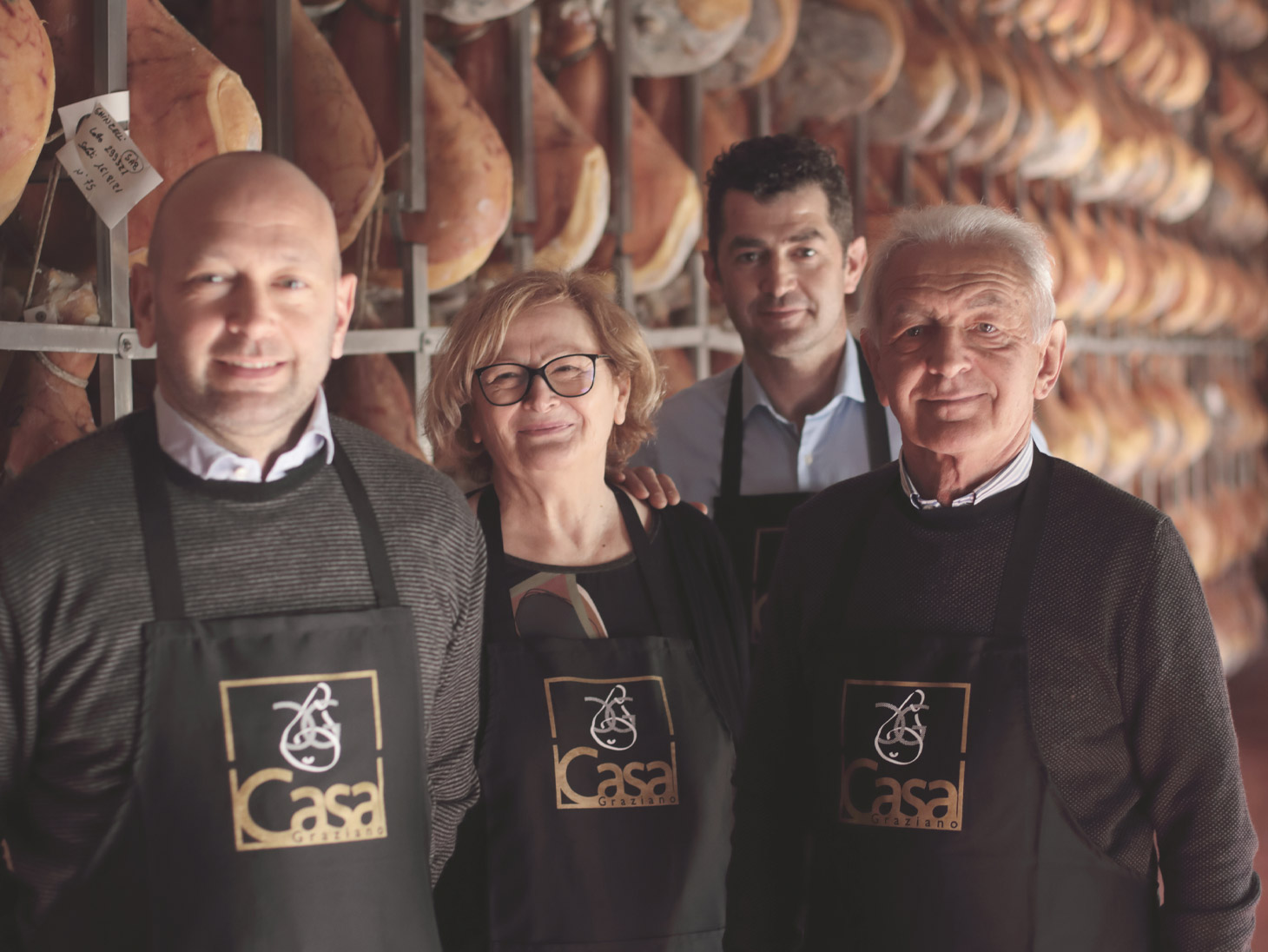 As we walk through the aging room for the photos, I ask Graziano to tell me how the ham factory was born: hearing the history of the company directly from those who founded it is always fascinating. Graziano, born in 1948, is happy with the question. His eyes shine and, despite he is more than 70 years old, you can still see the spark of those who are out of the ordinary.

"I was 16, I wanted to go on holiday at the seaside with my friends but I had no money, so I looked for a job and a ham factory in Langhirano hired me as a worker. It was 1966. After a few years I learned all the stages of processing and I began to think that I would like to found my own ham factory. One evening I went home to my father, who was running a small farm with 5-6 cows and I told him what I wanted to do. He replied: "I knew that you were crazy, but I didn't expected so much". However, he sold his cows and with the money obtained we renovated a small factory near home and we started working the hams".

"In Reno, a small fraction of Tizzano Val Parma, we stayed until 1999: we were producing 12,000 hams, it was time to make the leap in quality - Andrea tells us - I was 23 when we built the Capoponte plant. We made the first salting here in April 2001: now we are really satisfied with the quality we have reached, but it took us almost 10 years to remake a ham with the same quality as before. In Capoponte we can produce about 60,000 hams per year, with a capacity of 100,000 to be able to manage long aging". 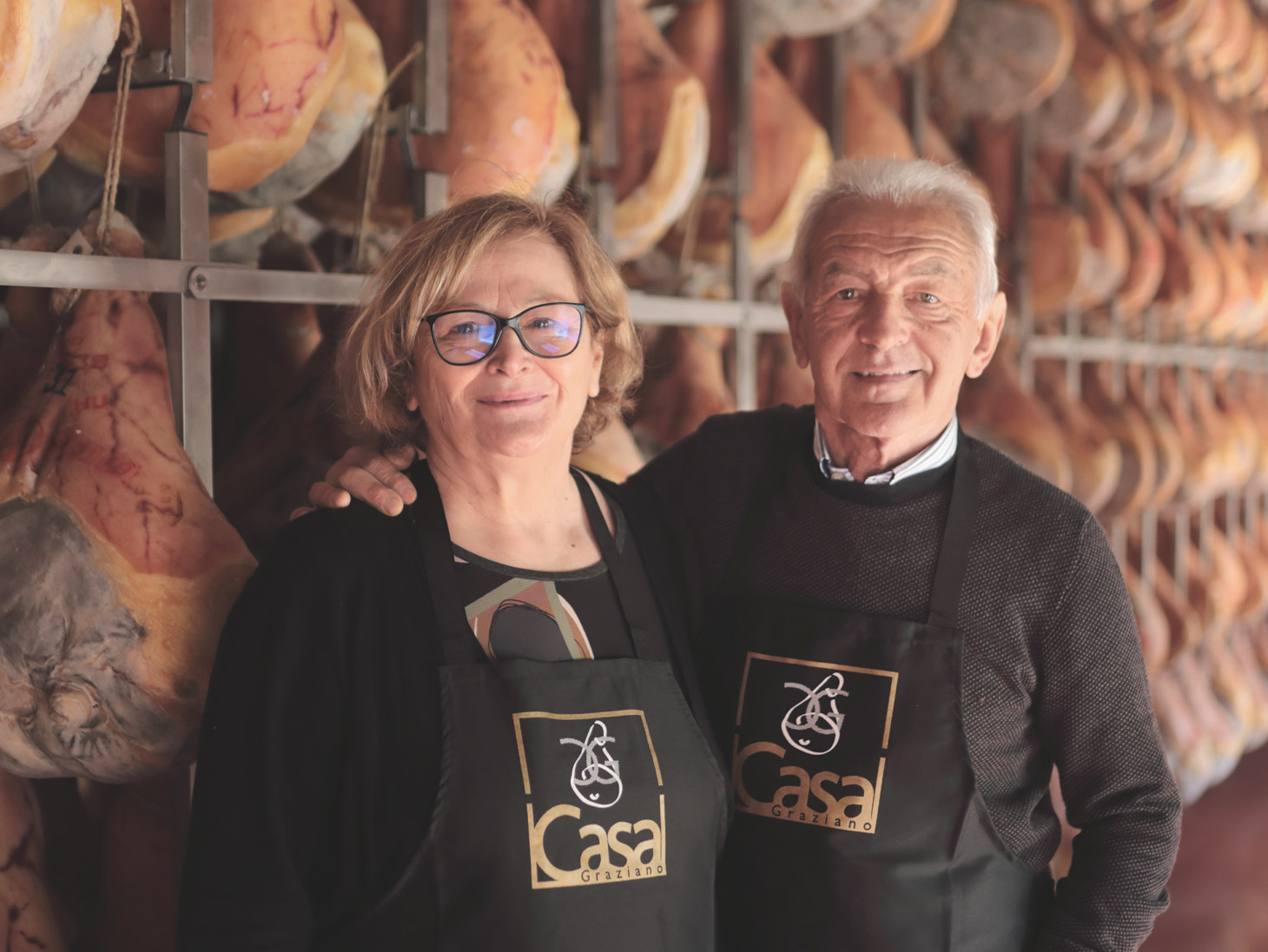 I ask Andrea if he remembers how the relationship with Valsana began. He tells me that one of his clients in Bologna had shown him our catalogue, telling him that we would be the right company to distribute their hams. So Andrea called us, made an appointment, loaded a ham into the car and came to visit us. It was 2006.

Since then we have walked a little way together, but the foundations of our collaboration are still the same: obsessive attention to seasoning and the desire to guarantee a constant quality.

We also manage to convince Luisa, who did not want to be photographed, to leave her office - Luisa has always been at Graziano's side and still manages the administration today - and we start taking some family pictures. There is a beautiful light that comes in from the windows: Graziano jokes with us while we take several photos at him opening and closing the windows, he really enjoys telling us about his job.

"There are 64 windows that we open and close every day, all by hand: we too could have introduced an automated opening as in many other factories, but we have chosen not to do so, because in this way we are forced to walk through the aging rooms. Look at these guys - he tells me pointing to the hams - you have to look after them every day, to understand how they feel. They tell you if they are too hot, if they are cold, but you have to look and listen to them". The windows are opened every day, in winter only for half an hour during the hottest hours, in summer a couple of hours early in the morning, from 5 to 7. 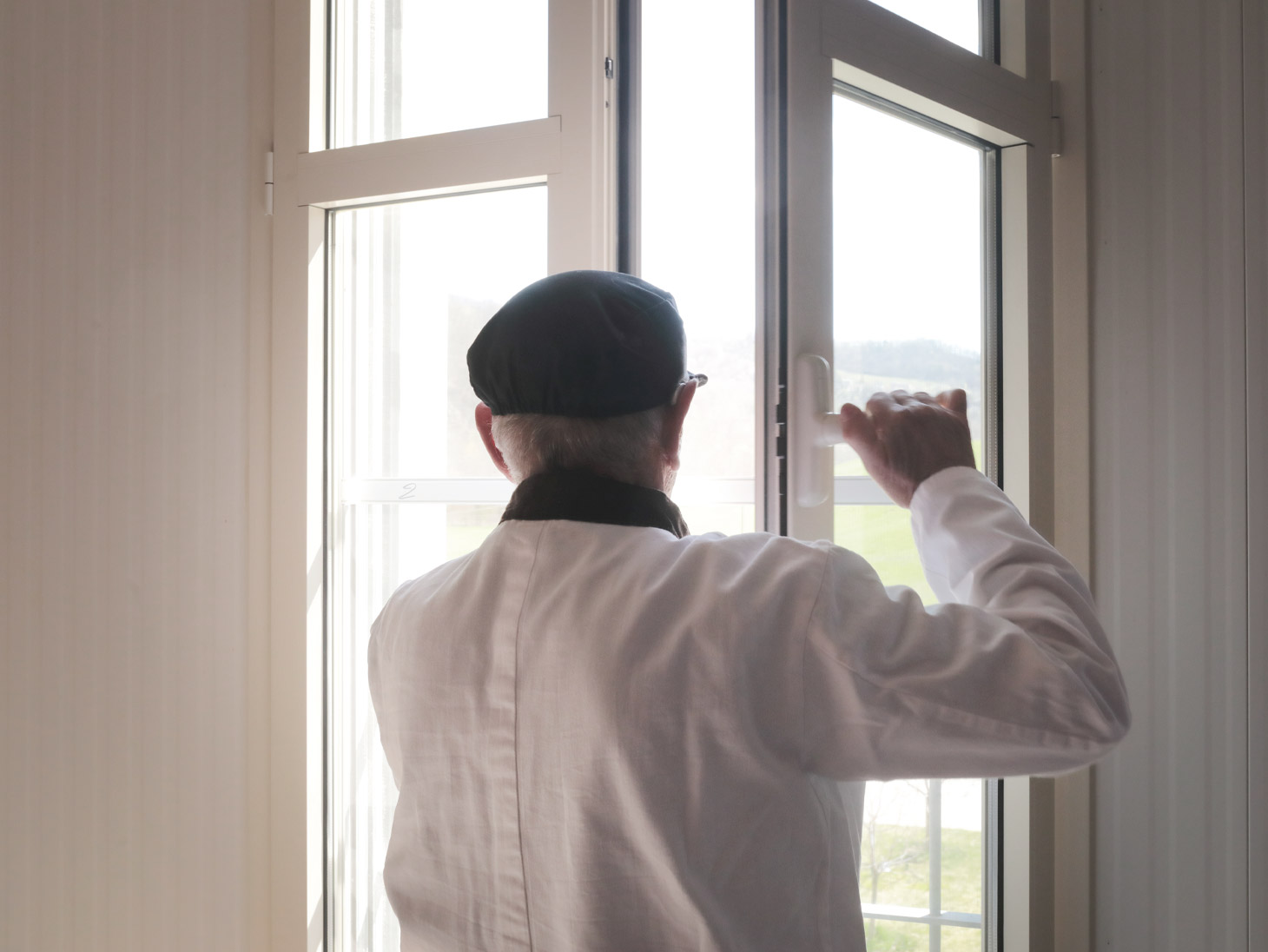 "After 60 years I still have fun, it's not just a job. But the greatest satisfaction has been realising a project that my sons also love".

Simone, the elder brother, is the head of production. "We manage every time batches from a single farm - we currently work with 7-8 farms. The legs are first selected, we check that there are no defects and those that do not meet our standards are returned. Upon arrival, the fresh leg has a weight of 14-16 kg, from which we immediately remove about 700 g of trimmings, which are returned to the slaughterhouse and used to make other cured meats. The legs usually arrive on Friday, but are salted only on the next Monday so that they all reach a homogeneous temperature.

We use Trapani salt of two different sizes: in summer the coarser salt is used while in winter the finer one. In the past the salt was ground by hand to save money, and then sieved: it was the work that Andrea and I we used to do in the afternoon when we were at school".
"Is this a right or a left thigh?" asks us Simone out of the bluewhile we are watching him trimming the thighs. Obviously we give him the wrong answer, so he tells us that we must observe the head of the femur: if it is on the left then the thigh is left, and vice versa. 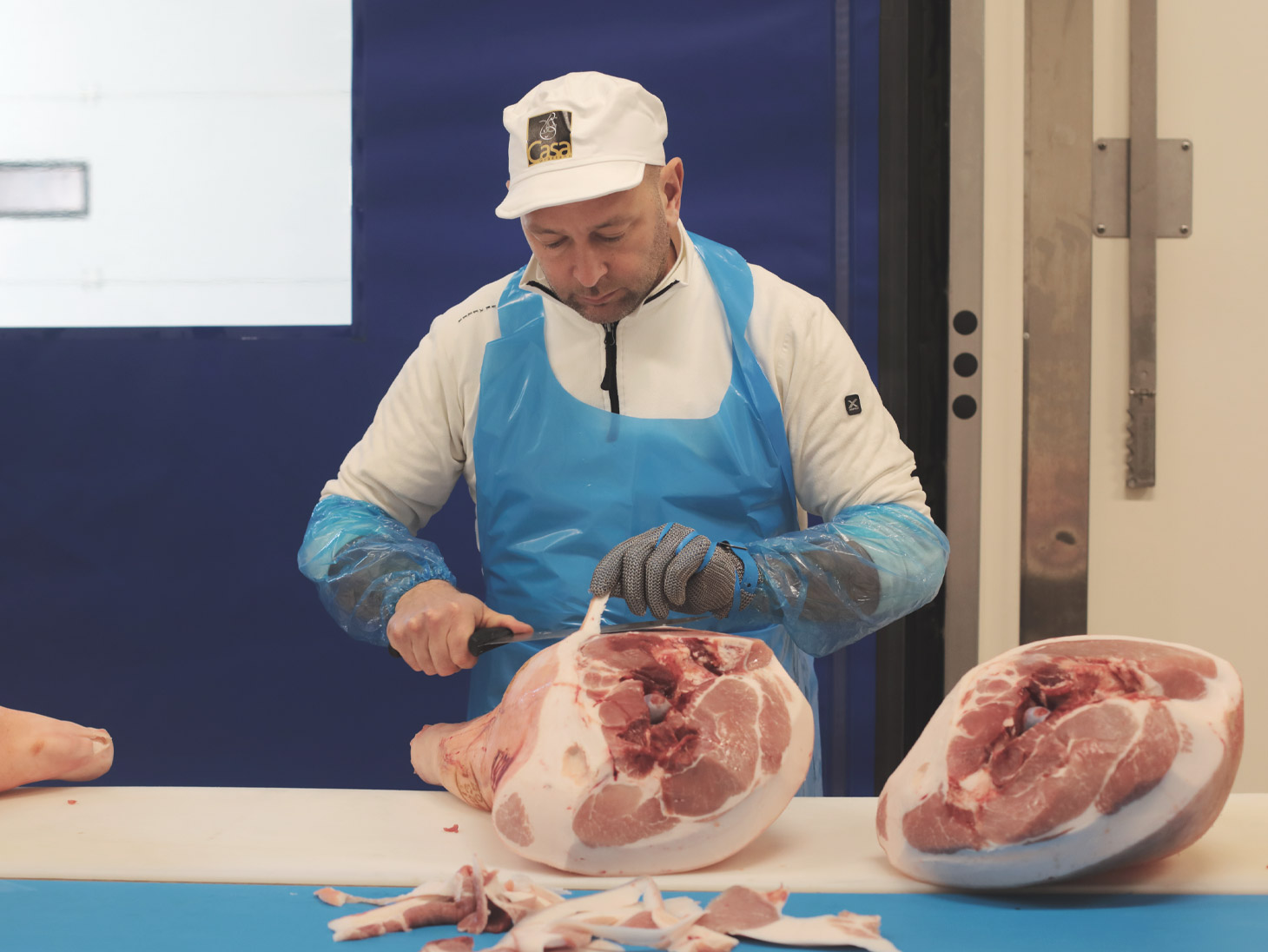 All the processing is done by hand: each leg is trimmed by hand, salted by hand, purged by hand. "This is the heart of the ham factory - adds Graziano - if you work properly in this phase, then it's only a matter of time. Within the consortium there are only 6-7 families left that make hams in an artisanal way as in the past, the other ham factories are more industrialised".

The thighs are salted for about 18 days: 7 days of first salt and 11 days of second salt. Two weeks of horizontal pre-rest follow, unlike many ham factories that hang the hams directly after the salt. With the horizontal pre-rest, the thigh dries better, the salt is distributed more evenly and the ham takes a more open shape.

After the pre-rest, a further cleaning is done: the "anchetta" is cut and the thigh is cleaned, before being hung in the rest cell where it remains for about two months. In this phase the ham "blooms": the yeasts that form on the surface tell us that the curing is proceeding in the correct way. 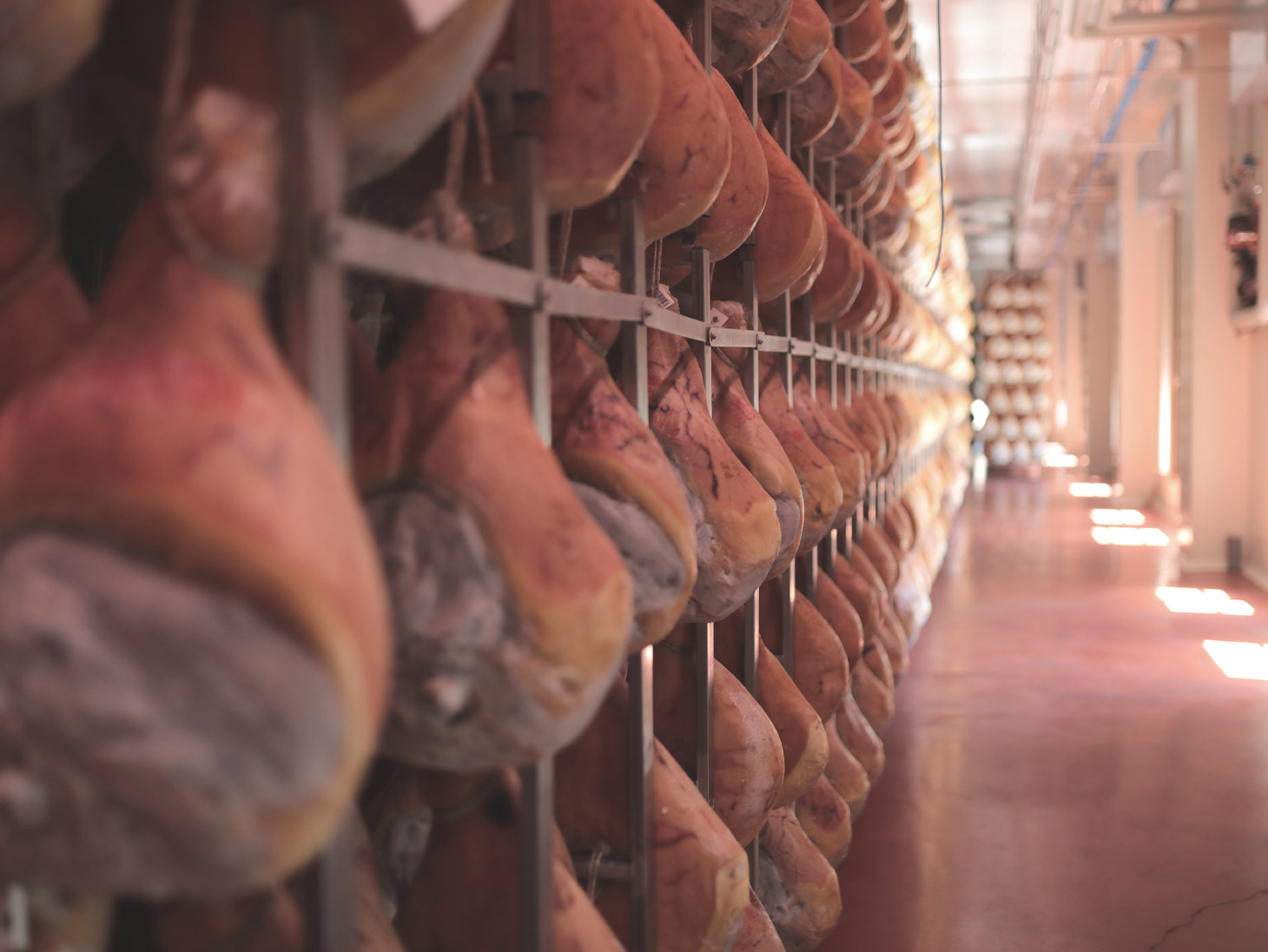 When the thighs reached 120 days of aging they are warmed up from 4 to 8°C in about 48 hours and then washed with water at 37°C. "The water is heated thanks to heat generated by the fans of the refrigeration systems, which in turn are powered for 30% by a photovoltaic system" - Simone is keen to specify. After the "shower" the thighs spend 4-5 days in the drying room.

The next step is the pre-seasoning, up to the end of the 8 months. Here the thighs just have to rest and get some air. "In this phase you can see the quality of the ham and if it has matured properly - Graziano tells us - at this point hams are like a woman just woken up in the morning, without make-up".

At 8 months the first "sugna" is made: the hams are controlled and then greased with minced pork lard, salt and pepper. 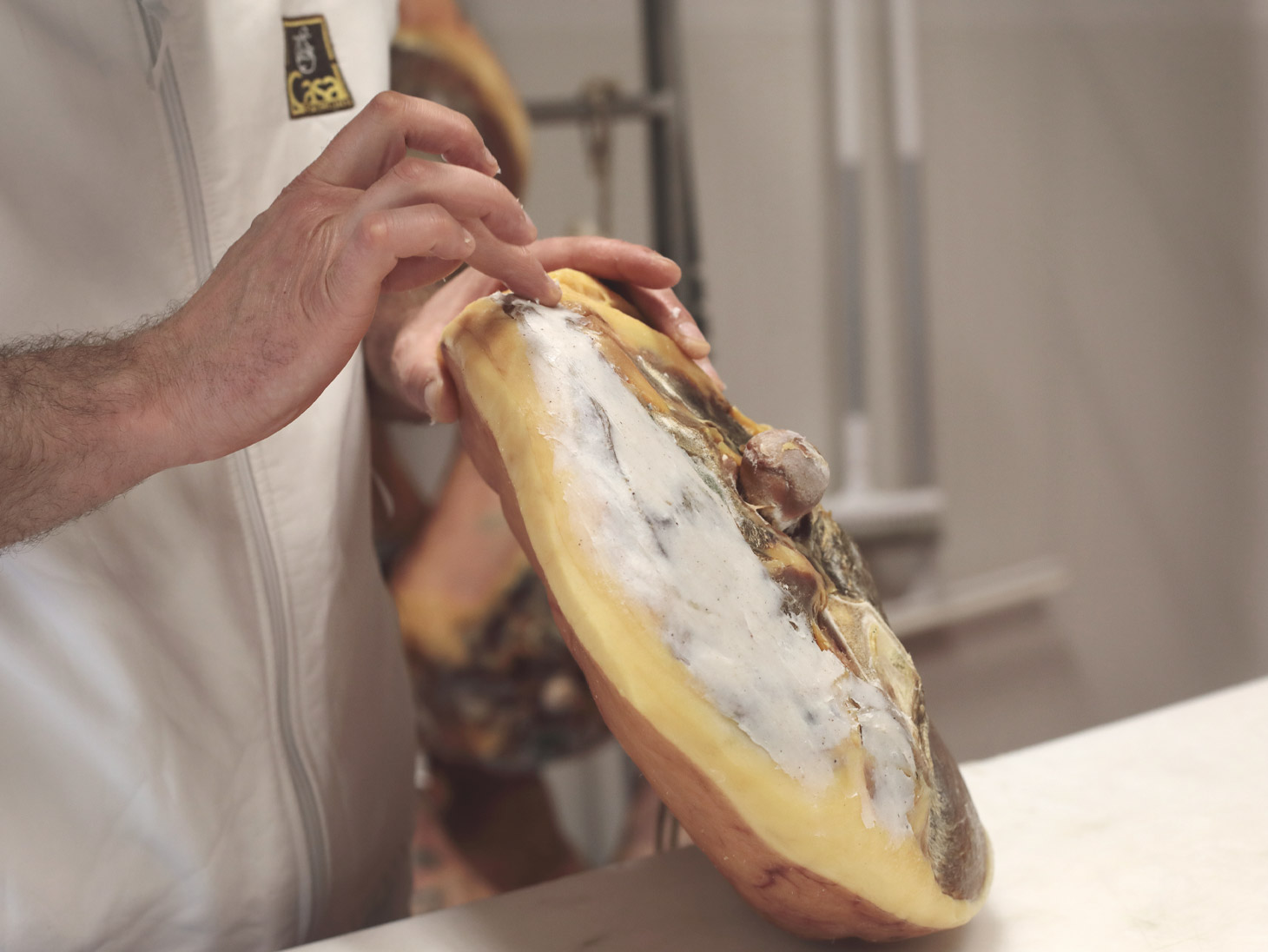 The speed with which this operation takes place is incredible, taking care to distance the grease from the rind to let the ham breathe. The curing proceeds up to 14-16 months, when the second "sugna" is done. In this phase, an acarus that eats the grease, the "ruffino", can form on the surface. It needs to be monitored, but it is a sign that the cellar is working properly.

Graziano also reveals a secret to us: how to understand if a ham is really air-seasoned. "Just look at the fat, the hams of the industry have white fat because they never see the light of the sun, while in the air-seasoned hams the fat on the outside oxidizes with  light and becomes a little golden".

After 12 months, the Consortium establishes which thighs can be fire branded as Prosciutto di Parma DOP, while at 16 months all the thighs are subject to a quality control to identify which hams can continue with longer seasoning; in this phase it is also establish which hams are reserved for us: they are set apart and then continue their seasoning. 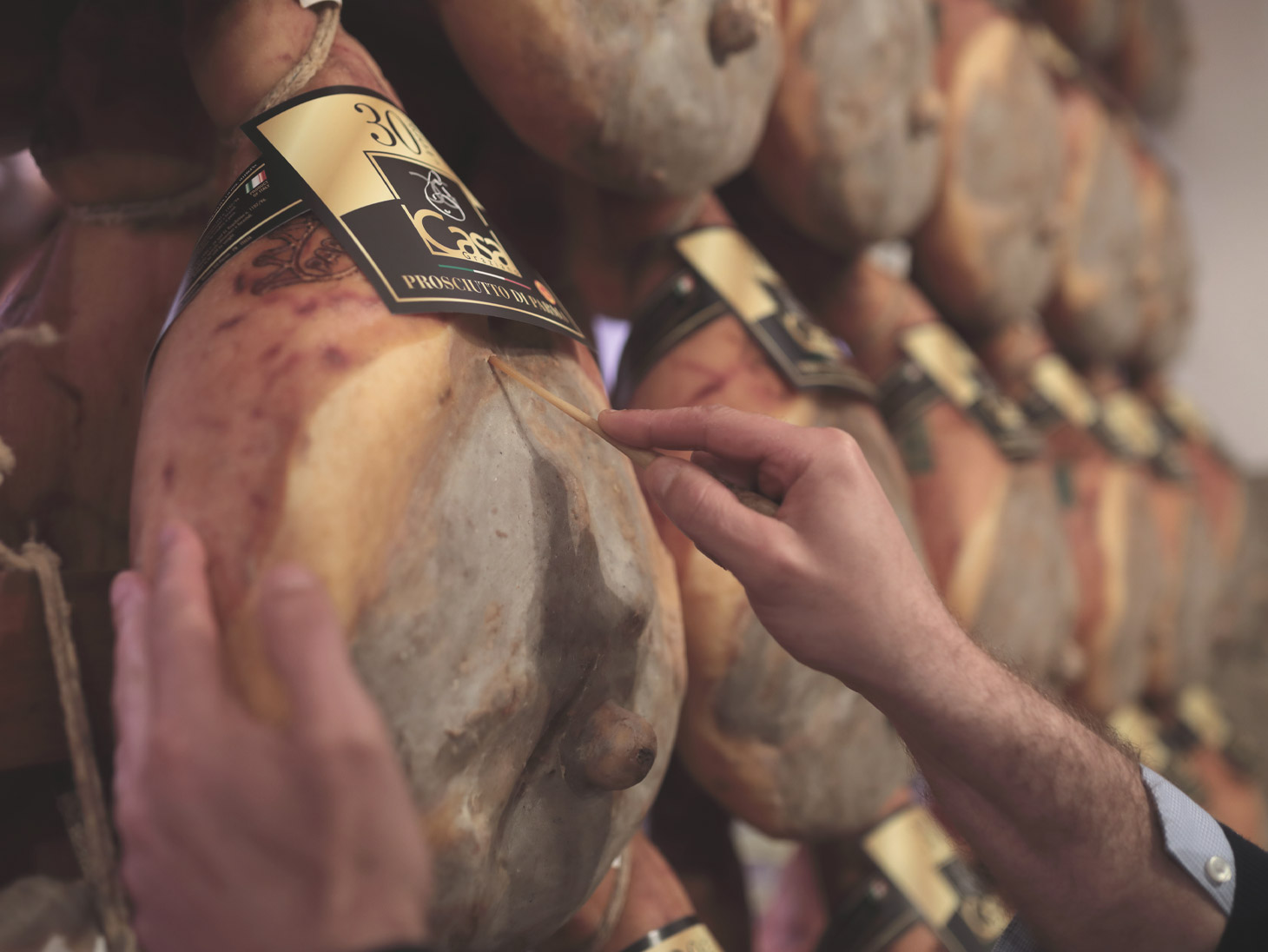 Andrea is the one who takes care of seasoning and ham selection: "The quality control is done with the horse bone (called "goccia"), a porous bone that retains the aromas. The ham is controlled in 5 points: under the crown, on the central vein, on the lateral vein, under the ankle and under the femur.

We move to the aging cellar in Lagrimone: it's only 15 minutes by car, but we pass from 350 meters of altitude in Capoponte to 700 meters in Lagrimone and the wind is definitely felt. This is the house of "30 e lode" (the best mark you can get at University in Italy): only the best hams are brought here at about 20 months to continue aging for another 8-10 months.

And here we conclude our visit with a tasting: a vertical tasting of Crudo di Parma and a taste of the new born of Casa Graziano, the Gran Culatta. We certainly could not escape this hard work! 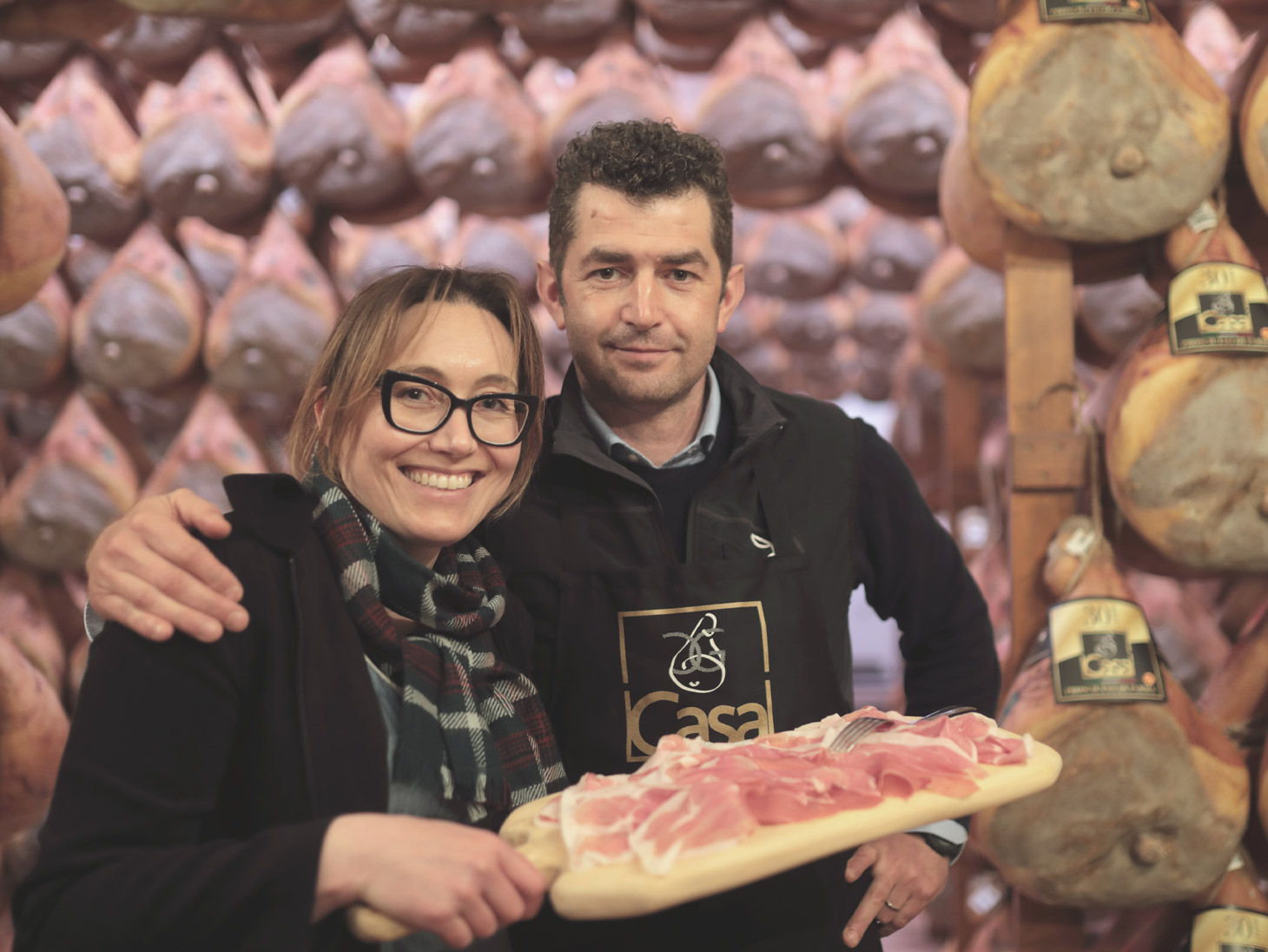