This is the time of year when Bagòss reaches its optimal aging, between 16 an...

This is the time of year when Bagòss reaches its optimal aging, between 16 and 18 months: now it is definitely the best time to try it!

This year our updates will have a different flavour, possibly slightly less scientific, but I hope you will find them just as useful. The aim is to focus on the product that best suits the time when the magazine comes out.

THE TIME IS NOW
The beginning of the year is the best time to try Bagòss di Bagolino: it’s at this time that the best alpage cheeses reach their optimal aging (16-18 months), which in our opinion allows these magnificent cheeses to show all its brilliant complexity, without the paste being too dry.

THE PRODUCER
We’ve been working with the Stagnoli family for many years. Our collaboration started with Giovanni, who passed the baton to his son Francesco, and we’re now working with the third generation, represented by Oscar and Federico, who have inherited the family passion for dairy farming and cheesemaking and are making a significant contribution to the family business, seeking to combine traditional approaches with modern health and hygiene standards.

In the summer, the whole family moves to the mountain pastures, working in alpine dairies known as malghe (singular malga), first in Malga Scaie (1750m above sea level) and then, from the middle or end of July, depending on the grazing conditions, in Malga Cornelle (2000m above sea level). FASCINATING FACTS
The origin of Bagòss probably dates back to the 16th century, when Bagolino, a small village in the Caffaro Valley near Brescia (Lombardy), was situated on the border of the Venetian Republic.

We are accustomed to the yellow paste of cheeses from Alpine pastures, but Bagòss stands out due to its particularly strong yellow colour, the result of adding saffron to the milk (photo 2), one of its distinctive features.

Saffron is certainly not a local product, but it was a common spice in Venice when the city traded with the whole world.

Legend has it that saffron was added to make the cheese look more attractive by giving it an intense yellow colour. For this reason it was also known as “Bagolino gold”. In any case, saffron was already used in the Middle Ages to colour cheese, as it was believed that the warmth of spices helped food to “cook” in the stomach, aiding digestion.

The town of Bagolino is also known for its Venetian-style carnival, another tradition that has been handed down through the centuries.

The name of the cheese is linked to that of the inhabitants of the town, the Bagossi, as if the cheese was part of the community and in fact there are many small businesses producing it and who take their cows into the mountains in summer, also because the area offers around 7,000 hectares of pastures rich in herbs, which differ depending on the altitude and give the cheese its particular aromatic complexity.

PRODUCTION
The raw milk, exclusively from cows of the Bruna breed, is first filtered (photo 1) often using, according to tradition, spruce branches and needles; then it is semi-skimmed by natural surface skimming before being heated in traditional copper pots over wood fires. This is the method used for cheeses from the summer production.

The cheeses we offer you are exclusively summer production cheeses; not to say that the winter product is in any way inferior, but the summer cheese is certainly the best from the point of view of its aromatic profile and the emotions this evokes.

The rind is hard and rubbed regularly with linseed oil in order to minimise the formation of mould and to avoid excessive drying. The rind is the only protection the paste has, and needs to remain intact as far as possible to avoid mould entering during aging. 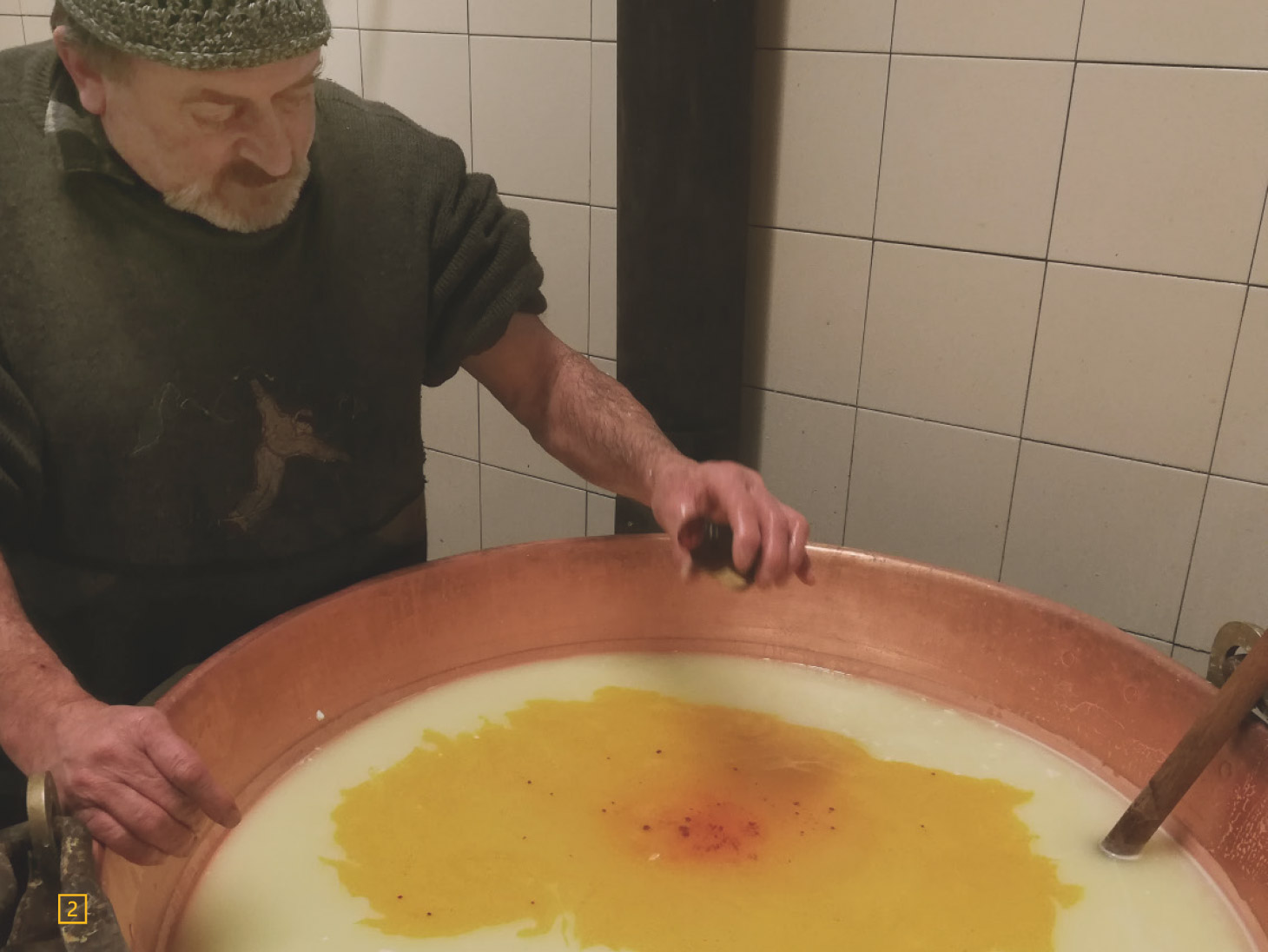 AGING
Where the cheese is produced it is customary to eat it while it’s relatively young: generally it’s available to buy after 12 months of aging, but we believe it should be left for two summers to allow all its characteristics to fully emerge, when the paste is dry but not too dry, as can occur in a longer-aged product.

We offer longer-aged cheeses thanks to an agreement with our producers to reserve exclusively for us some wheels that we select and monitor through regular visits (photo 3).

For this activity, too, expertise has been handed down through the generations. It has always been Natale (our Chairman) the expert in selecting the wheels of Bagòss. Now he is passing on all his knowledge to his son Enrico, who works alongside him in this part of the process, combining business with the fundamental human relationships that are so precious to us.

The first cheeses we take down to our warehouse are the smaller ones (15-16kg); the heavier ones will benefit from longer aging of around 28 months, and will be taken down before the cheeses from the next production are ready. TASTING
Cut yourself a piece, hold it up to your nose and break it in half. Breathe in and sniff. You’ll be able to make out hints of spices and herbs, pastures, cooked butter and finally a delicate smoky note. Now taste it. Take your time and allow it to dissolve slowly in your mouth. First you’ll get animal and herbaceous hints, saltiness and a slight spiciness. Then the notes become increasingly subtle: you’ll taste the meadow, the spiced notes of saffron, and, once again, cooked butter.

Enjoy the intensity and length of this great cheese and be transported for a moment to the delicious solitude of the mountains, far away from everything.